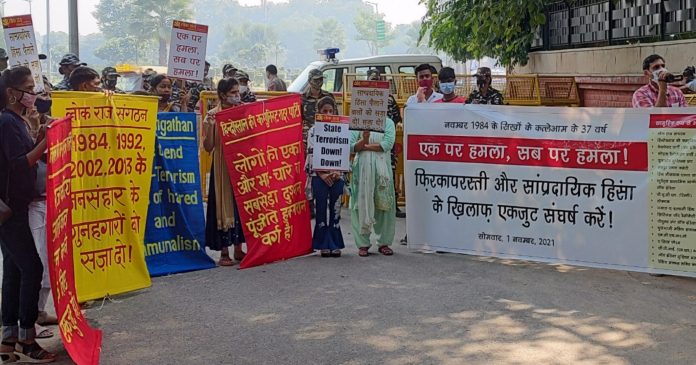 New Delhi: On the 37th anniversary of the brutal genocide of the Sikhs that took place in Delhi and other parts of India, Lok Raj Sangathan, together with several other organizations held a protest meeting at Mandi House here on Monday as Delhi Police did not allow a protest march from Mandi House to Parliament. The leaders demanded that those guilty of organising massacres like 1984 should be severely punished.

The main banner screams “Unite in the struggle against Communalism and Communal violence!” and termed an attack on one is an attack on all”.

Addressing the gathering, S Raghavan, President of the Lok Raj Sangathan declared that the genocide of November 1984 was in reality, a conspiracy hatched at the highest levels of government. Its purpose was to further the agenda of the super rich, the big corporations, by crushing the resistance of the people to the “economic reforms” agenda of the rulers. It was done to split the unity of our people on the basis of religion and embroil them in a ruthless bloodbath. Such tactics, learnt from the British colonialists, are used by the rulers today also. Witness the manner in which the farmers’ protest is sought to be discredited by labelling them as ‘Khalistanis’ and terrorists. LRS is working closely with other organisations to ensure that the fighting unity of the people is strengthened, so that we can thwart these diabolical plans of the rulers.

Advocate Shahid Ali of the United Muslim Front said that dividing people on the basis of religion is in the interests of the rulers. The genocide of Sikhs 37 years ago was not the first nor will it be the last bloodbath. Only last year they attacked people of the Muslim faith for allegedly spreading the Corona virus! Solidarity of the people, which LRS and other organisations gathered here are trying to build, is very important. We must always raise our voices against injustice unitedly

Sucharita of the Communist Ghadar Party of India offered a red salute to the LRS for consistently organising a protest every year on the anniversary of the genocide of the Sikhs.

Organising this action every year is a call for punishment for the numerous crimes by the rulers against the people of our country. State organised communal violence and state terror have become the preferred method of rule, for the big monopoly corporate houses who are setting the agenda for our country. The same tactics are employed again and again, whenever their rule is threatened. Our protest today is a call to strengthen our unity and put an end to the politics of communal division and state terror.

Inamur Rehman of the Jamaat e Islami Hind congratulated the LRS and other organisations for organizing the protest. We must uphold the principle that “An attack on one is an attack on all!” he said

Advocate Arun Majhi of the PUCL (Delhi) said November 1984 showed the fascist character of the rulers behind their democratic façade. Constitutional rights need to be fought for and defended. Except for very rich people, no one else has benefited since Independence. We must keep up the struggle till we win our democratic rights!

Dr. Nizamuddin Khan of the Social Democratic Party of India (SDPI) lauded LRS for organising the event year after year. If rulers attack us on the basis of religion and caste, and if the mass media participates in it as well – it is very harmful for the nation as a whole. The unity of the people is essential to end the politics of hatred and barbadi (destruction), he said.

Thirty-seven long years have gone by since the Sikh genocide that took place in Delhi and in many other cities over several days starting on 1st November 1984. Over three thousand people of the Sikh faith were killed according to official figures, but it is estimated that 10,000 people were killed according to other sources. But hardly a handful of criminals have been convicted for this horrendous crime till now – and more importantly, the criminal involvement of those in command of this entire operation, the heinous role of the political masters behind this genocide have been kept under wraps. Several governments have come and gone meanwhile, but those guilty of masterminding the carnage have not yet been punished! In the years that have followed the gruesome massacres of 1984, state-organised communal violence and state terror have become the preferred method of rule, for our rulers, no matter which party is in government.