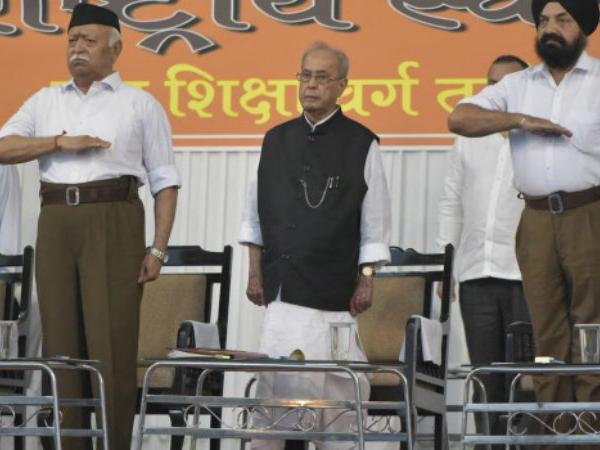 An internal Emergency was imposed on the country by then Prime Minister Indira Gandhi on June 25-26, 1975, and it lasted for 19 months. This period is considered as ”dark times’ for Indian democratic polity. Indira Gandhi claimed that due to Jaiprakash Narayan’s call to the armed forces to disobey the ‘illegal’ orders of Congress rulers had created a situation of anarchy and there was danger to the existence of Indian Republic so there was no alternative but to impose Emergency under article 352 of the Constitution.

RSS claims that it opposed Emergency promulgated by Indira Gandhi  heroically and suffered immensely for resisting Emergency. But there are dozens of contemporary narratives which decry this claim of the RSS. We will be referring here to such two narratives by a veteran thinker and journalist of India, Prabhash Joshi  and TV Rajeswar, former Intelligence Bureau [IB] chief  who was the deputy chief of IB when Emergency was imposed. They recounted the days of Emergency (or state terrorism) when RSS surrendered to the repressive regime of Indira Gandhi, assured her and her son, Sanjay Gandhi to enforce faithfully the draconian 20-point programme announced by the Emergency regime. Large number of RSS cadres came out of jails by submitting MAAFINAMAAS (mercy petitions).

Despite all this betrayal thousands of RSS cadres continue to get monthly pension for persecution during Emergency. The BJP ruled states like Gujarat, Madhya Pradesh, Rajasthan and Maharashtra decided to award a monthly pension of Rs 10,000 to those who were jailed during the Emergency period for more than a month and Rs 5000 to those who were jailed for less than a month. This rule took care of the financial interest of those RSS cadres who might have submitted mercy letters completing only one or two months’ jail term. For securing such a fat pension there was no such condition that the beneficiary should have been in  jail for the whole period of the Emergency.

Interestingly, in the case of anti-British freedom struggle there has not been even a single RSS cadre to claim the freedom fighter pension. It may be noted that nobody remembers hundreds of Communist youth, branded as Naxals who were killed in fake encounters during the Emergency. Interestingly, Shiv Sena , the Hindutva co-traveler of the RSS openly supported the Emergency.

The narrative by Prabhash Joshi appeared in the English weekly TEHELKA on the 25th anniversary of the Emergency.[i] According to him even during the Emergency “there was always a lurking sense of suspicion, a distance, a discreet lack of trust” about RSS’ joining the anti-Emergency struggle. He went on to tell that “Balasaheb Deoras, then RSS chief, wrote a letter to Indira Gandhi pledging to help implement the notorious 20-point programme of Sanjay Gandhi. This is the real character of the RSS…You can decipher a line of action, a pattern. Even during the Emergency, many among the RSS and Jana Sangh who came out of the jails, gave mafinamas (apologies). They were the first to apologise. Only their leaders remained in jail: Atal Behari Vajpayee, LK Advani, even Arun Jaitley. But the RSS did not fight the Emergency. So why is the BJP trying to appropriate that memory?”

Prabhash Joshi’s conclusion was that “they are not a fighting force and they are never keen to fight. They are basically a compromising lot. They are never genuinely against the government”.

TV Rajeswar, who served as Governor of Uttar Pradesh and Sikkim after his retirement from service, in his book, ‘India: The Crucial Years” [Harper Collins] corroborated the fact that “Not only they (RSS) were supportive of this [Emergency], they wanted to establish contact apart from Mrs Gandhi, with Sanjay Gandhi also”.[ii] Rajeswar in an interview with Karan Thapar disclosed that Deoras “quietly established a link with the PM’s house and expressed strong support for several steps taken to enforce order and discipline in the country. Deoras was keen to meet Mrs. Gandhi and Sanjay. But Mrs. Gandhi refused.”[iii]

According to Rajeswar’s book, “RSS, a right-wing Hindu nationalist organisation, was banned in the wake of the Emergency. But its chief, Balasaheb Deoras, quietly established a link with the PM’s house and expressed strong support to several steps taken to enforce order and discipline in the country. Sanjay Gandhi’s concerted drive to enforce family planning, particularly among Muslims, had earned Deoras’s approbation.”[iv]

Rajeswar also shared the fact that even after Emergency the “organization (RSS) had specifically conveyed its support to the Congress in the post-emergency elections.”[v] It will be interesting to note that even according to Subramanian Swamy in   the Emergency period, most of the senior leaders of RSS had betrayed the struggle against the Emergency.[vi]

The contemporary documents in the RSS archives prove the narratives of Prabhash Joshi and Rajeswar truthful. The 3rd Supremo of RSS, Madhukar Dattatraya Deoras wrote the first letter to Indira Gandhi within two months of the imposition of Emergency. It was the time when state terror was running amok. In letter dated, August 22, 1975 he began with this praise of Indira:

“I heard your address to the nation which you delivered on August 15, 1975 from Red Fort on radio in jail [Yervada jail] with attention. your address was timely and balanced so I decided to write to you”.[vii]

Indira Gandhi did not respond to it. So Deoras wrote another letter to Indira on November 10, 1975. He began his letter with congratulating her on being cleared by the Supreme Court of disqualification which was ordered by the Allahabad High Court, “All the five Justices of the Supreme Court have declared your election constitutional, heartiest greetings for it.” It is to be noted that opposition was firmly of the opinion that this judgment was ‘managed’ by Congress. In the course of the letter he declared that “RSS has been named in context of Jaiprakash Narayan’s movement. The government has also connected RSS with Gujarat movement and Bihar movement without any reason…Sangh has no relation with these movements…”[viii]

Since Indira Gandhi did not respond to this letter also, RSS chief got hold of Vinoba Bhave who supported the Emergency religiously and was a favourite of Indira Gandhi. In a letter dated January 12, 1976, he begged that Acharya should suggest the way that ban on RSS was removed.[ix]  Since Acharya too did not respond to Deoras letter, the latter in another letter without date wrote in desperation,

“According to press reports respected PM [Indira Gandhi] is going to meet you at Pavnar Ashram on January 24. At that time there will be discussion about the present condition of the country. I beg you to try to remove the wrong assumptions of PM about RSS so that ban on RSS is lifted and RSS members are released from jails. We are looking forward for the times when RSS and its members are able to contribute to the plans of progress which are being run in all the fields under the leadership of PM.”[x]

Riding the juggernaut of the rulers, specially the autocratic ones has been an old practice in RSS. It was the reason that no leader and cadre of RSS participated in the anti-colonial freedom struggle. In fact, the RSS worships brute force and totalitarianism. The most prominent ideologue of the RSS, 2nd boss of the organization, Golwalkar decreed as back as 1940 that “The RSS inspired by one flag, one leader and one ideology is lighting the flame of Hindutva in each and every corner of this great land.”[xi]

Recently, the former President of the Indian Republic, Pranab Mukherjee was invited by the RSS chief, Mohan Bhagwat to be the chief guest at its graduation ceremony for the new recruits. Pranab Mukherjee was indicted as one of the top leaders of Congress for Emergency excesses. The tragedy of RSS is that India continues to be run under a democratic polity so its love for brazen power has to be balanced by double-game.