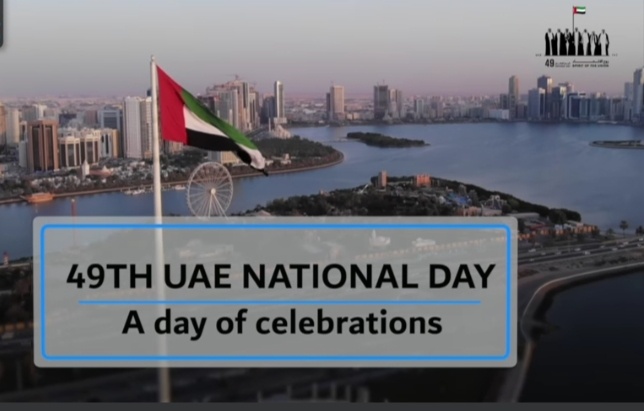 New Delhi:   As On 2 December 2020, the UAE is celebrating it’s the 49th National Day to mark the anniversary of the union of the seven emirates. The UAE Ministry of Foreign Affairs and International Cooperation (MoFAIC) released a comprehensive report highlighting the federation’s journey rich in monumental events and achievements, building on the foundation that was first laid down by the late Sheikh Zayed bin Sultan Al Nahyan and his brothers, the fellow founding fathers.

According to report, in 2020 the UAE witnessed achievements in several fields at the national, regional and international levels. It   launched  a peaceful nuclear power plant, the first of its kind in the region, as well as entering the global race to explore outer space by sending the first Arab and Islamic probe to Mars – “the Hope Probe” -, making it one of the nine countries aspiring to explore this planet. The probe was launched on July 20, 2020, and it is expected to reach Mars by the year 2021, coinciding with the fiftieth anniversary of the founding of the United Arab Emirates.

The UAE fulfilled its goals by ranking first worldwide in 121 indicators, becoming the first among Arab countries in 479 indicators, and among the top five globally in 189 indicators. Today, the UAE is shaping a comprehensive development plan for the next 50 years starting from the UAE’s Golden Jubilee in 2021 until the UAE’s Centennial in 2071.

Arab peoples have long been eager for a stable, functioning, and prosperous region.  It is time for new approaches and thinking to set a new and better path for the future of the region.

In this perspective, Sheikh Abdullah bin Zayed Al Nahyan, Minister of Foreign Affairs and International Cooperation signed the “Abraham Accords Peace Agreement” between the UAE and Israel on September 15, 2020, signaling a new page in the relations between the two countries and promoting concerted efforts to enhance stability and security in our region.

“The Agreement is a historic achievement for the UAE, Israel and the US and creates immediate and meaningful security, economic, and social benefits.”

Since its formation in 1971, the UAE  has delivered unconditional foreign assistance globally to support economic growth in developing countries and provide basic social services to communities in need to improve their quality of life.

It committed to devoting at least 15 percent of its total foreign aid to humanitarian purposes, which would make the UAE one of the most dedicated donors to humanitarian assistance.

The UAE has sought to mediate between parties in conflict, de-escalate tensions, and develop inclusive political processes and security approaches to ensure durable transitions out of conflict. For example, the UAE and UN Women launched the Women, Peace and Security Training Programme at the Khawla bint Al Azwar Military Academy for women from developing countries to train and serve as peacekeepers.

The UAE seeks elected membership on the United Nations Security Council for the 2022 – 2023 term in order to advance inclusion, spur innovation, build resilience and secure peace.

A model of coexistence, tolerance and innovation

Individuals from more than 200 nationalities call the UAE home and it o hosts  dozens of Christian churches, two Hindu temples, a Jewish synagogue, a Sikh temple and a Buddhist monastery; in 2022, we will complete the Abrahamic Family House, which will bring together Christian, Jewish and Muslim houses of worship.

The Ministry of Foreign Affairs and International Cooperation, in coordination with the National Emergency, Crisis and Disaster Management Authority, led the response plan since the onset of the crisis of the new Coronavirus outbreak, initiating the repatriation of Emirati citizens from a number of affected countries. The Ministry completed 166 air and ground repatriations from 61 countries, involving 4,043 Emiratis and their companions.

The UAE also facilitated the repatriation of citizens from brotherly and friendly countries, who were stranded in other countries and unable to return to their homes and families during pandemic.

The UAE has delivered medical supplies to over 120 countries in need, assisting more than 1.6 million medical workers worldwide in the fight against the COVID-19 pandemic.

Dubai’s International Humanitarian City, IHC, processed more than 132 shipments of aid to over 100 countries, more than 80 percent of the distribution of personal protective equipment worldwide.

The UAE also announced its commitment to supporting the UN World Food Programme in its efforts to tackle the COVID-19 pandemic.

The COVID-19 crisis imposed the need to adapt to a new reality in all areas, and thus a qualitative shift in the field of diplomacy and a review of future diplomacy.

The Ministry adopted the latest methods of online communication within the framework of public and cultural diplomacy, hosting a number of ministers, officials, state ambassadors, foreign ambassadors and specialists during the Online Cultural Marathon Symposium, through a series of teleseminars broadcast on the Ministry’s various social media channels.

State embassies and missions abroad also held online cultural talks, including the virtual dialogue on the documentary series “The History of the UAE”, hosted by the UAE Embassy to the United Kingdom.

The UAE government has taken several measures in preparation for the future, and in dealing with the aftermath of the Covid-19 pandemic, including reviewing the structure and size of the government, the possibility of merging ministries and redesigning authorities, and creating a more lean, flexible and swift government to keep pace with new and diverse national priorities.

Amidst the global crisis resulting from the Covid-19 pandemic, Expo 2020 Dubai has been postponed, as these are unprecedented times, and the health and safety of all Expo 2020 participants remains a top priority for the country. Many Expo participant countries were significantly impacted by COVID-19 and they have therefore expressed a need to postpone the opening of Expo 2020 Dubai by one year, to help them overcome this challenge.

There will be more than 200 participants, including nations, multilateral organizations, businesses and educational institutions. To date, more than 190 nations from across the world have confirmed their participation at Expo 2020.

The UAE has adopted economic diversification as a priority in anticipation of future challenges facing the region and the world.

The country has been witnessing notable developments and the expansion of numerous non-oil sectors, including media, ICT, tourism, renewable energy, manufacturing, and commercial aviation.

The year 2021 and the winds of the future

By 2021, the UAE intends to achieve its vision for this year, which aims to set the UAE among the best countries in the world in terms of economic and social development, by the golden jubilee of the union.

The National Agenda includes a set of national indicators in the sectors of education, health, economy, security, housing, infrastructure, and government services. The leadership periodically reviews these indicators to ensure the achievement of its goals by 2021.