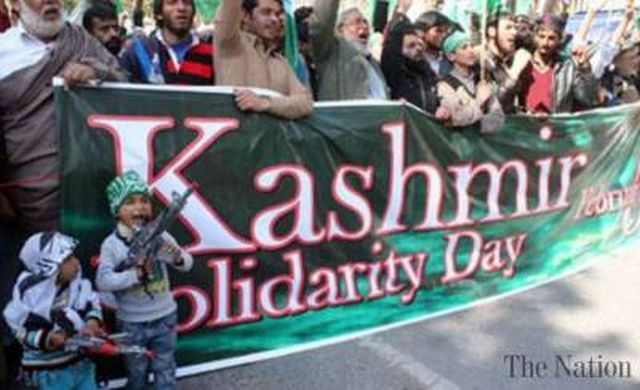 International Conference on Kashmir held at the British parliament has adopted a resolution expressing concerns over the plight of Kashmiri people. The resolution urged the International Community including the United Nations to take immediate and effective measures to address the human rights situation in Kashmir.

Expressing solidarity with the Kashmiri people, it said, the resolution expressed the commitment to continue efforts for creating awareness and extend moral support to the Kashmiris.

Addressing the conference in London, Qureshi said Kashmir is the oldest dispute on the UN agenda, adding Pakistan will continue to support Kashmiris in their just struggle for right to self-determination.

The Pak Foreign Minister said Indian rulers have been denying plebiscite in Kashmir as promised by their past leaders.

“India is using different tactics to change the demography of the held Valley,” Qureshi alleged.

The Foreign Minister called upon the international community to break its “silence over the ongoing atrocities and grave human rights violations in Kashmir.”

“He also urged international media to raise the ground realities in the Indian held Kashmir before the world,” the report said.

Addressing the conference, Senator Mushahid Hussain Syed said right to self-determination is the fundamental right of the people of Kashmir. “India is committing massacre of Kashmiris,” he said.

Addressing the conference, Member British House of Lords, Sayeeda Warsi said “sexual violence in Kashmir as a tool of war is most horrific and India is failing to fulfill its responsibility.”

Labour MP and shadow British Foreign Minister Debbie Abrahams said they need to wake up international community to take interest in the issue of Kashmir and their right of self-determination.

He said India is a member of commonwealth and its rule should respect human rights.

Liberal Democrat MP Tom Brake said there is a special role for the UK government in terms of the historic role that it has to play for resolving the Kashmir dispute.

Labour MP Sharron Debbie said Kashmir has become a horror story but peace can never be achieved by violent means.

Bondevick said that he visited Kashmir and was horrified to see the humanitarian situation.

Meanwhile, Kashmir Solidarity Day is being observed today across Pakistan to express “whole hearted support of the Pakistani nation to just struggle of Kashmiri people for their inalienable right to self-determination under UN resolutions.”

“One minute silence was observed at 10.00 am to pay homage to the martyrs of the liberation struggle of Kashmir,” radio Pakistan reported on Tuesday.

Also, President Alvi and Prime Minister Imran Khan, in their separate messages on Kashmir Solidarity Day, have “reassured Kashmiri brothers and sisters that Pakistan will remain consistent in its principled position on Kashmir issue.”

Alvi in his message, said the entire Pakistani nation stands with its Kashmiri brethren in their valiant struggle to achieve the legitimate right to self-determination.

“It is our firm belief that Kashmiris will succeed in their struggle,” Alvi was quoted as having said by the report.

PM Khan in his message said the freedom movement in Kashmir is getting strengthened with every passing day.