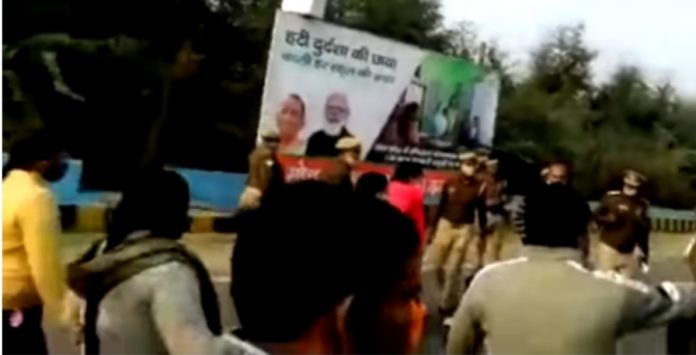 The BJP UP CM Ajay Singh Bisht ‘dying-hours’ efforts to empower technical-education to students, when almost the whole tenure has lapsed, has added yet any sour chapter to its governance, as the glitterati of the ‘distribution of free tablets and smart phones’ at Ekana Stadium in the state capital Lucknow, also witnessed unruly scenes outside the venue with indiscriminate lathi-charge on students, leaving many injured while slogans like ‘Education Minister is a thief’ ranted the air. But, little did anyone had known by then that the machine provided by the BJP government, will in fact be the source of ‘intelligence-gathering’ of students in UP.

The baton-charge in Lucknow, was obviously not covered by any mainstream media-channel but can be accessed on social-media, which is the only source available to downsize the official jargon. But, what would now need to be examined is that the devices to the given-free by the UP government, of course with a flash the duo-pictures of AS Bisht as well as BJP PM Narendra Modi, do have a troubling-grey area as once after the phone is opened-up, it informs that the device isn’t private! What would that mean? Is the device then a state-organ? Or the BJP tapping machine?

It is therefore clear that the girl or the boy in possession of such machines will never be able to exercise her or his exclusive franchise on the phone as the BJP government has permanently reserved the right to put it under its surveillance, through which a minute-to-minute update of the browsing history, as part of BJP strategy to use such devices for ‘intelligence-gathering’, will be put to use. There is no provision for any privacy for anyone who lays her or his hands on any such apparatus, that is for sure.

What would need to be stressed is that once after the phone is opened-up, what appeared on the screen will perhaps be not only surprising but frightening, if not appalling! It is clearly stated, that ‘Your IT admin may be able to see your data and activity on this device. To learn more contact your IT admin’. This is a clear announcement that the Admin connected with this devise will know every action or activity undertaken by the user. The unfortunate part is that BJP also at the same time wants to claim the entire project as ‘beneficial’ to students? But at what stake?

It is here one gets reminded about the recent claim made by Samajwadi Party Chief Akhilesh Yadav, that BJP is engaged into phone-tapping and that everyone who calls him also rings a bell inside AS Bisht office, and that every evening AS Bisht “listens to them too”. Snooping on ‘rivals and vulnerable’ is what makes BJP ‘a party with a difference’. Remember that ‘snoopgate’ scandal in which allegedly the then Gujarat Home Minister Amit Shah was involved into spying a woman-architect in 2009. AS Bisht, as understood has denied Akhilesh Yadav allegations, but the big question which flies in the face of AS Bisht-is why is he putting the unsusceptible students on BJP radar? The BJP government will have to come clear and specify if it is the Admin of these electronic gadgets is BJP or is BJP IT Cell In-charge Amit Malvia likely to call the shots on it? How come a phone company, has been able to diabolically claim to ‘access-details’ i.e. browsing history etc. of the user, until propelled by the government in command?

What also ought to be reiterated is that the SC has already accorded ‘right to privacy’ as one of the fundamental rights enshrined in the Constitution and that a phone company or the government, just cannot fathom the right to infringe on anyone’s privacy. This assumes a further alarm as the present BJP government is already engaged into dispelling the allegations of ‘hacking’ the phone numbers of hundreds of persons including journalists, politicians, bureaucrats, Opposition members and individuals including the female staff of Ex. CJI Ranjan Gogoi who has made sexual-allegations on him. The issue is being fought in the SC as CJI NV Ramana has called that SC just cannot be a mute spectator into the ‘Pegasus Snoopgate scandal’, allegedly orchestrated by BJP. Pegasus is an Israeli spyware used in the hacking of phones. No doubt the latest is to even outscore what Pegasus could do!

BJP in its manifesto had promised to distribute tablets/smart-phones but which has come as government’s own belonging as the students will have no right on it. What purpose is therefore then for the overall exercise? The unsuspecting student will just lie-bare before the ‘spying-eyes’ of the government as the ‘tools for technical education’ will ultimately end up as a secret-collection mechanisms. Every phone-call, every chat, every downloaded App, his or her pictures and videos etc, which are always private- will therefore, stream down into the government/Admin lap? The strata of students are quite grown-ups like MA, BA, BSc, ITI, MBBS, MD, BTech, MTech, PhD, MSME, Skill Development etc and who are to be given a priority, says the government.

It has also been clear that Facebook cannot be downloaded on the phone, plus there is a warning too, that the ‘Admin can lock your phone and reset your password. Admin can delete all data on phone’. It further specifies that ‘Your IT admin can monitor and manage settings, corporate access, apps, data associated with your device and your device location information’ Perhaps, if the student engages into any anti-BJP activity, then for sure, he or she is most likely to find the phone as good as dead! And may be, later subjected to calls-from BJP office, for further name-shaming. What would then be the whole gala event called-for? Distribution of paper-weights as that is what would serve the purpose! Perhaps, students are not likely to charge such tablets/phones as that would eat their electricity bills too.

This begs to the cardinal question, that in today’s world, where we hear to organized gangs swindling millions from bank accounts, then why would a student use such a phone for any online transaction if not to hazard the risk of compromising his or her bank details, passwords etc! This gift of AS Bisht, on the eve the new year, will therefore likely to turn into the worst nightmare for students, who already have been marred with no jobs and employment in this last tenure. Will therefore, students are likely to fall prey to the prying eyes of fraudsters apart from the official ‘secretive-collection’ of their private lives.

Perhaps, had the students got clear of such proportions at the venue, the best way out was to have returned ‘it’ in the first place? With a mighty ‘no-thank you’ AS Bisht Ji.