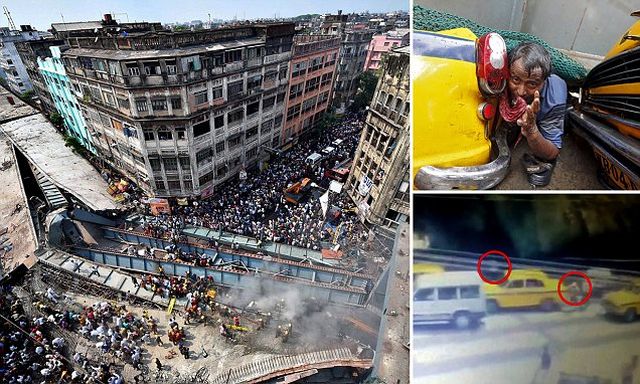 Kolkata : A portion of the bridge collapsed in South Kolkata on Tuesday, crushing a man to death and leaving 19 injured and several vehicles damaged.

West Bengal Chief Minister Mamata Banerjee, who confirmed one death, expressed apprehension about the fate of five-eight people who may be buried in the rubble. Nineteen injured people have been admitted in two city hospitals, she told the media in north Bengal’s Darjeeling.

Locals, however, claimed five people have been killed in the bridge collapse.

At least 20-25 injured people have been rescued by fire officials while more people are feared trapped under the rubble, officials said.

“A part of the Majherhat bridge between Taratala and Mominpur collapsed around 4.30 p.m,” a fire official said. Initially six fire tenders were pressed into service.

“At least 20-25 people have been rescued from the spot. It is possible that not many are trapped under the collapsed part of the bridge. But we need to remove the debris to find out what is underneath,” another official working at the accident site said.

Four teams of National Disaster Response Force (NDRF), fire brigade and personnel of disaster management teams are at the spot. Cranes have been deployed and gas cutters are being used for the rescue operation.

Three columns of the Army have been kept ready if required, a spokesperson of the Eastern Command said.

The rescue operation was impeded due to occasional rain and lack of daylight on a rainy day.

Banerjee, now on a trip to Darjeeling, expressed concern over the incident and said her government will initiate a probe into the cause of the bridge collapse.

“We have heard one person died so far. We are trying to get back but it takes close to four hours even to get down to the plains from the Darjeeling hills on a rainy day. Also no flights are available right now.

“We are constantly monitoring the situation. We are initiating a probe so that everything can be found out. Steps are being taken on an emergency footing to rescue those who are trapped,” said Banerjee.

She added: “We have heard that four-five labourers used to stay in a temporary tin shed under the bridge. If they were there during the collapse, it is possible that something unfortunate may have happened to them. However, all the pedestrians and passengers in the public and private vehicles could be rescued. We are concerned about the lives of five to eight people who might have got trapped underneath.”

“The collapse of a part of a bridge in Kolkata is deeply unfortunate. My thoughts are with the families of the victims. I pray that those who are injured recover at the earliest,” Modi said in a tweet.

Urban Development Minister Firhad Hakim, who rushed to the spot, said rescue teams who went under the bridge did not find any trapped persons.

“They have not found any trapped persons so far. But they are still trying to ascertain whether anybody is trapped,” he said.

According to a state official, the 40-year-old bridge was constructed by the Kolkata Port Trust and maintained by State Public Works Department.

Tuesday’s incident has revived the dreadful memory of the Posta flyover collapse here two years ago. Twenty-six people were killed when the under-construction Vivekananda Flyover collapsed in the city’s Posta area on March 31, 2016.

Need not to prove we are patriots, says Nawab Wajid Ali Shah’s descendant