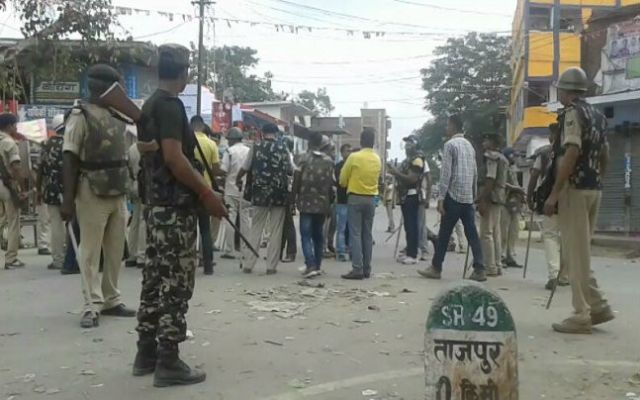 Patna : Two days after Chief Minister Nitish Kumar said his government will not spare those responsible for the recent communal violence in the state, ruling ally BJP on Saturday expressed its displeasure over “one-sided police action” against the majority community.

A delegation of Bharatiya Janata Party (BJP) leaders on Friday met Bihar police chief and submitted a memorandum demanding a halt to what they called “one-sided police action against the majority community” in districts that witnessed communal violence during the Ram Navami processions.

The delegation led by state BJP vice president Devesh Kumar Singh in its memorandum to the Director General of Police K.S. Dwivedi accused the police of having acted in a partisan manner against the majority community in the aftermath of recent communal violence in Bihar.

According to BJP leaders, the party in the memorandum stated that in districts like Aurangabad, Nalanda and Samastipur, the majority community resorted to aggression only after provocative acts by anti-social elements from the minority community.

The party leaders alleged that following the outbreak of violence that took place around Ram Navami, those belonging to the majority community had been arrested in large numbers, while the administration had chosen to go soft on the minorities.

The BJP demanded, among others, release of all innocent people and a high-level inquiry into the alleged partisan approach of the police.

The police have arrested over half-a-dozen BJP leaders in Bhagalpur in connection with communal violence there on March 16. Last week, Union Minister Ashwini Choubey’s son Arijit Shashwat, accused of inciting violence in the district, surrendered after evading arrest for over a week. He was sent to 14 days’ judicial custody and his bail plea was rejected by the court.

In Aurangabad, a BJP leader Anil Singh, the key accused for inciting communal violence in the district, surrendered last Monday, two days after he escaped from police custody. Soon after he surrendered, Singh was also sent to a 14-day judicial custody.

Similarly, some BJP leaders and workers were detained and arrested in Rosera in Samastipur district, Munger and Nalanda districts in connection with the communal violence.

The police action has angered the BJP and they made it clear by meeting the police chief and expressing their displeasure.

JNU: Power cut and stone throwing at students during screening of BBC documentary on PM Modi