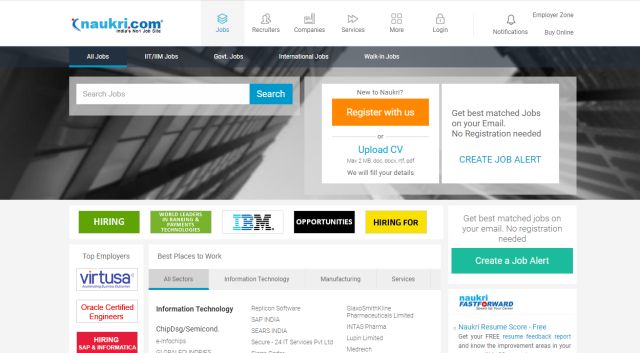 According to the survey, the Naukri JobSpeak index for November at 2,113 saw a 16 per cent growth from the corresponding month in 2016, with a broad-based growth in jobs observed in multiple industries.

“Good to see sectors viz construction, engineering, auto, industrial products and banking showing significant growth over last year. We can expect the market to further gain momentum and move north in the next few quarters,” he added.

The report pointed out that jobs in construction/engineering industry went up by 46 per cent while jobs in auto sector saw a growth of 39 per cent in the period under review.

During the same period, jobs in heavy machinery and banking sector saw a 30 per cent and 24 per cent growth in hiring, respectively, the report said.

“Jobs in BPO sector went up by 14 per cent in November 2017 when compared to November 2016. The IT software sector also witnessed a seven per cent increase in jobs over the same time period,” it added.

The report noted that while production/maintenance jobs rose by 37 per cent, site engineering jobs saw a 30 per cent growth during the period.

Accounts/finance and marketing/advertising jobs saw a 27 per cent and 26 per cent growth, respectively, while sales jobs recorded 23 per cent rise during November 2017, the survey highlighted.

Of the eight metro cities tracked by the job portal, seven recorded an increase in hiring activity in November.

“The index for Kolkata grew by 51 per cent, while Delhi NCR and Mumbai saw growth of 15 per cent and 16 per cent, respectively, in hiring in the same time period. Bangalore saw a dip of three per cent in jobs,” said the survey.

It added that the positive trend of job growth was also seen in smaller cities.