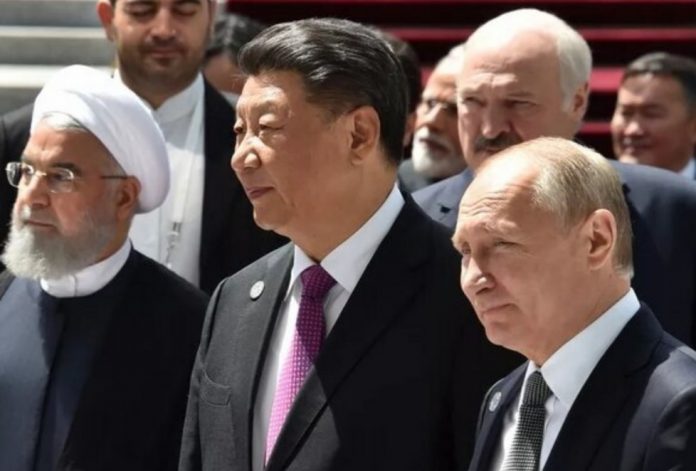 The Russia-Ukraine war since February is now surely entering into a very serious and a dangerous phase, as it is learnt that Russia’s triad of nuclear weapons, which it can use through air, water or land, has been activated, as its nuclear train has been deployed close to Ukraine border, reported The Hindustan Times 1 on October 4.  This has triggered a worldwide fear as the Russian step may not this time be treated only as a hoax, which West often wants to dismiss it as, but rather with extreme caution.  India, has offered to be ready to contribute for peace to end the war, reported Reuters 2, but Ukraine President Volodymyr Zelensky is not interested to sit across the table. Russia went to war against Ukraine for its intentions to join NATO, and invite Europe to the very entrance of Russia, and in the last seven months, has annexed four regions of Ukraine, Luhansk, Donetsk, Kherson, and Zaporizhzhya, which by way of a referendum joined Russia on September 30, which the world has called as a sham!

Russia is under extreme US and EU sanctions and has lately been attacked allegedly by US over its Nord Stream-2 underwater gas pipeline, and of late has been running short of options to end the war, has threatened nuclear-strikes on a couple of occasion in the past, but the way the nuclear-train has reached Ukraine, carrying Russian soldiers with nuclear equipments etc to fight, if a nuclear war breaks out, is a grim warning that Russia is now even ready for a nuclear war. What the world is watching, in fact, is to see Russian soldiers in Hazmat suits, as that would signal Russia going ahead with a nuclear or a chemical war, but will Russia do it? This is the biggest question.

However, what is also important is that the Russian nuclear mobilization has come within a week of the historic speech by Russian President Vladimir Putin, after the referendum of the four regions, which is also available in a transcript on En.Kremlin.RU 3 in about 4673 words, in which he took the opportunity to throw light on the centuries of expansionism, colonization, imperialism, capitalism, as the driving ideologies of the West and how Russian people had thwarted it. He emphasized, ‘ It is worth reminding the West that it began its colonial policy back in the Middle Ages, followed by the worldwide slave trade, the genocide of Indian tribes in America, the plunder of India and Africa, the wars of England and France against China, as a result of which it was forced to open its ports to the opium trade. What they did was get entire nations hooked on drugs and purposefully exterminated entire ethnic groups for the sake of grabbing land and resources, hunting people like animals. This is contrary to human nature, truth, freedom and justice. the Western elites’ unconcealed animosity toward Russia is precisely the fact that we did not allow them to rob us during the period of colonial conquests and forced the Europeans to trade with us on mutually beneficial terms. This was achieved by creating a strong centralized state in Russia, which grew and got stronger based on the great moral values​​of Orthodox Christianity, Islam, Judaism and Buddhism, as well as Russian culture and the Russian word that were open to all.’ He referred to Russia, China and Iran as deterrent to West hegemony in today’s world.

What does the message of Putin holds for India? Will India abide by it, despite being reminded of centuries of loot orchestrated by West on it, and after India’s overwhelming reliance on the erstwhile Soviet Union, for decades, over the entire military supplies from Russia, and most of it, Russian unstinted support to India in the war with Pakistan in 1971? The answer perhaps may be on the contrary as India’s elite, is West centric and it is no denying the fact that Indian elite presence in West and US has increased almost by 100% in the last about 30 years. The Indian position towards US, had always been there, as analysts argue, but it got a shot in the arm by the US President Bill Clinton five-days visit to India in the year 2000, whereas he visited Pakistan for only five-hours, had finally made India to embrace US, even if that be at the cost of Russia, and which, has now come-out in the open.

Putin might have tried to touch the vital chord with India, but the statement has not evoked any popular response from India’s elite, who are too West drenched, and moreover also that India, due to the geo-political scenario build-up, is not expected to reciprocate, as India knows it well that Russia is to side with China when it comes to between China-India affair. India is involved very bitterly with China in border disputes, and expects that US as a natural corollary will support India against China. This Russian stand has also made a definitive echo in New Delhi, when its ambassador Denis Alipov, on September 23, had made it clear that Russia would stay-away between any border disputes pertaining to India and China.

What however, is to be seen is that Russia has always tended to stand by its friends, as it was the only nation to have come forward to rescue Bashar Al Asad regime in Syria after the fall of Iraq and Libya, or else US and the West were to have swept Syria. It was also Russia who called upon Israel ambassador to Moscow Alexander Ben Zvi to stop the Israel war on Palestine in May 2021 or else Russia was to start to attack Israel. The war stopped in 24 hours.

How India will situate itself into the Russian calculus is what the time would tell. But, as for Putin’s speech, perhaps, there are no such ready-takers in India as of now.