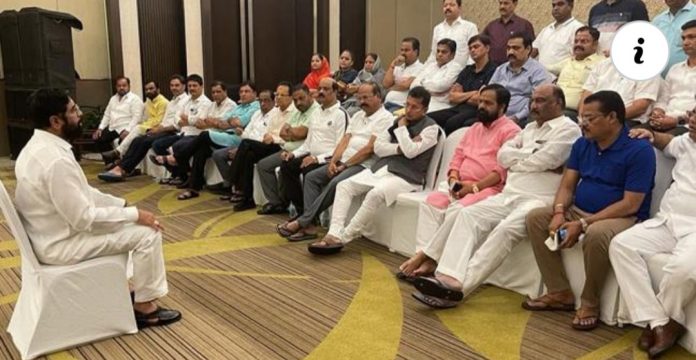 The Shiv Sena government in Maharashtra is in crisis. Its senior leader and urban development Minister Eknath Shinde has run away with more than 30 MLAs to Guwahati, putting a demand to the party to disassociate with the Congress and the NCP and align with the BJP. The developing situation in Maharashtra has given the saffron party a strong chance to form the government, even though it was in opposition.

After the 2019 election, the Shiv Sena allied with Congress and NCP to form a government. The BJP put spokes luring the NCP head Sharad Pawar’s nephew and strongman Ajit Pawar to their side appointing him as deputy chief minister. However, clever political maneuvering by the NCP supremo stemmed the tide of other MLAs from defection. Now again, questions are being asked, as to whether the BJP is using similar tactics to topple the Shiv Sena government and install its government in Maharashtra. Such surgical strike is decoded as ‘Operation Lotus’

‘Operation Lotus’ refers to the BJP’s strategy for gaining power in states where it lacked enough seats to form a government on its own. This is an exclusively designed statecraft by the BJP where while sitting in opposition topples the elected government by wooing the ruling party’s MLAs, poaching them, buying them, locking them in hideouts, and resorts, till the government in power falls.

The toppling of elected governments was on a decline since the anti-defection law was implemented as it required two-thirds of MLAs to switch for a legal defection; otherwise, the defecting MLAs were disqualified. But the BJP found a way to it as now MLAs don’t defect, they resign. By-polls are held and the BJP wins.  This kind of political mechanization has become a common practice in India since the BJP has come to power in 2014.

In Madhya Pradesh, the Congress government was toppled on March 20, 2020 when Kamal Nath’s government was plunged into crisis as 22 Congress legislators, including six ministers, tendered their resignations after top Congress politician Jyotiraditya Scindia announced his resignation.

In Karnataka, the coalition government led by HD Kumaraswamy was overthrown after the resignation of 16 Congress and one JD(S) MLA on July 23, 2019.

In the Goa election on February 22, Congress got 17 seats and was the single-largest party, while the BJP had 13. But still, it was able to gain power as it won over the Goa Forward Party which switched sides after campaigning alongside the Congress throughout the elections.

In Arunachal Pradesh in the year 2016, the BJP was successful in forming a government even when in 60 members assembly, it had only ’11’ MLAs. A BJP government was installed after 33, out of 43 Peoples’ Party of Arunachal (PPA) MLAs led by Chief Minister Pema Khandu, joined the saffron party. With the majority of 44 MLAs, BJP formed its own government in the state.

In 2016, Uttarakhand experienced its worst political crisis, when the Congress party’s MLAs revolted against its own Chief Minister Harish Rawat. Congress accused the BJP of orchestrating defections inside their party to destabilize a democratically elected government.

In Rajasthan in July 2020, Sachin Pilot, who was upset about being denied the Chief Ministership post in 2018, staged a rebellion when 19 Congress MLAs stayed away from legislative party meetings, defying the CM’s orders. Then Chief Minister Ashok Gehlot put his MLAs in hotels till the crisis blew over and he won the vote of confidence.

In a similar way, the BJP has toppled as many as eight elected governments and formed its government even though it had no majority and now it’s doing the same in Maharashtra.

The modus operandi of operation lotus is simple. If the opposition party wins the state election, the BJP will not accept the defeat and sit idle. It swings into action to woo the ruling party’s MLAs and offer them a hefty price and several incentives to rebel. In this way, the BJP is successful in breaking away many disgruntled MLAs.  They are marked and targeted and bought over with offers of cash and kind. First, the government is toppled, and then the BJP installs its government with utter disregard for democratic norms or public approval.

Since the BJP has come to power in 2014, elections have become ornamental in India.  Elections are only for the purpose of giving legitimacy to the democratic norms. We the people of India actually have no choice, as in the end, the BJP will form the government either by hook or crook.

When people are voting for the non-BJP parties and are successful in installing such a government, they never realize, that the BJP can upset their choice by masterminding the poaching of the MLAs. The BJP will influence some ruling party’s MLAs by offering them loads of currency and a ministerial birth. And that’s how the BJP converts its electoral defeat into a victory. This is ‘Operation Lotus.’

This statecraft is finely developed by the BJP since it’s in power in 2014. The BJP has made a mockery of democracy and the voters have no role to play in challenging such unethical political practices. The BJP rule has made elections to become meaningless in India. The voters too have sensed their game-plan and view elections as an opportunity to make money.

This is BJP’s game-plan to tame the democracy and make the elections irrelevant. The BJP has developed a mastery over such statecraft where elections have become redundant because even if it loses, it’s going to install its government somewhere down the line. The BJP’s domination over all independent and constitutional institutions ensures the party wins even when people are unwilling to accept such a government.

Such assault on democracy is going on unabated in the BJP rule. As far as the BJP is concerned, it will make the wrong look right through its “Godi media.” The media will extoll such unethical acts and side with the government’s unscrupulous tactics, abandoning the democratic forces.

The report concludes; “These developments are among the instances contributing India to the descent into electoral authoritarianism in what used to be the world’s largest democracy.”