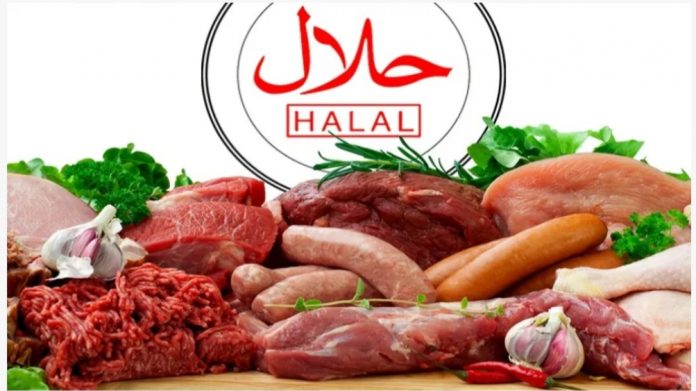 There is a lot of talk going on these days about ‘HALAL’ (meat) in media in the country. While some are critical of it, the other group is in its favor. It is the ‘meat’ being debated upon, a non-vegetarian food for some. The fact is, India is one of the important producer and third largest exporter of meat in the world and earns huge income by way of valuable Foreign Exchange. With about 1.8 billion Muslims around the world who eat only halal meat, the halal-certified food and beverage market valued at $415bn internationally, India occupies third position. Petty shop owners and road side kiosks in the country sell meat to local consumers; the animals are slaughtered in government established slaughterhouses spread over in towns and cities. Large Trading Houses export it at corporate level by processing it in their large slaughter houses at a larger level.

‘HALAL’ is not simply a tag, label or slogan as some may put it. It has a reason, philosophy and comprises certain specific actions. It has its scientific, wellness and divine reasons too. The term refers to things and procedures applied for slaughtering a particular (permissible) animal with the purpose to consume its meat. It is done in accordance with Islam suggested procedure. Several conditions need to be fulfilled. The animal is laid down first and its throat is slit (dhabih) in a swift way causing deep incision with a very sharp knife, cutting the wind pipe, jugular veins, carotid arteries of both sides but leaving the spinal cord intact. “The name of Allah” or (Bismillah) (In the name of Allah) has to be called/recited by the person performing the act upon slaughter of each animal individually. This act results in a quick drop in blood pressure, restricts blood supply to the brain and allows the blood (considered to be toxic and harmful for the human health) flow out of the animal now collapsing, to the maximum. This abrupt loss of pressure results in the rapid and irreversible cessation of consciousness and sensibility to pain (a requirement held in high regard by most institutions.).
It is worth noting that not just meat or diet, the concept of ‘halal’ influences Muslims’ entire lifestyle including earning and spending, clothing work, leisure etc. and almost in all walks of life. It is prohibited to slaughter one for the sake of fun or as a part of practice, competition etc. The majority of Muslims ensure they eat halal food only and also try to conduct themselves in a halal manner irrespective of place they are living in. It does not mean that they impose their choice on others. The belief by some that raising or transporting animals for slaughter may engender psychological stress or trauma, and those carry out this action get emotional and susceptible to domestic violence, social withdrawal, anxiety, drug and alcohol abuse is totally baseless and has no foundation. Such wrongly drawn conclusions are based on gossip and hearsay. The Islamic principles are based on the following verses from its holy scripture ‘Quran’:

1) He has only forbidden you what dies of itself, and blood, and flesh of swine, and that over which any other (name) than (that of) Allah has been invoked; but whoever is driven to necessity, not desiring, nor exceeding the limit, no sin shall be upon him; surely Allah is Forgiving, Merciful. (Qurʼan, Chap. al-Baqarah, ayah 173)

2) Forbidden to you (for food) are: dead meat, blood, the flesh of swine, and that on which has been invoked the name of other than Allah; that which hath been killed by strangling, or by a violent blow, or by a headlong fall, or by being gored to death; that which hath been (partly) eaten by a wild animal; unless ye are able to slaughter it (in due form); that which is sacrificed on stone (altars); (forbidden) also is the division (of meat) by raffling with arrows: that is impiety. This day have those who reject faith given up all hope of your religion: yet fear them not but fear Me. This day have I perfected your religion for you, completed My favor upon you, and have chosen for you Islam as your religion. But if any is forced by hunger, with no inclination to transgression, Allah is indeed Oft-forgiving, Most Merciful. (Qurʼan, Chap al-Maʼidah, ayah 3)

3) This day (all) the good things are allowed to you; and the food of those who have been given in the Book is lawful for you and your food is lawful for them; and the chaste from among the believing women and the chaste from among those who have been given the Book before you (are lawful for you); when you have given them their dowries, taking (them) in marriage, not fornicating nor taking them for paramours in secret; and whoever denies faith, his work indeed is of no account, and in the hereafter he shall be one of the losers. (Qurʼan, Capt. al-Maʼidah, ayah 5)

4) Therefore eat of that on which Allah’s name has been mentioned if you are believers in His communications. (Qurʼan, Chap. al-Anʻam ayah 118)

5) Say: I do not find in that which has been revealed to me anything forbidden for an eater to eat of except that it be what has died of itself, or blood poured forth, or flesh of swine– for that surely is unclean– or that which is a transgression, other than (the name of) Allah having been invoked on it; but whoever is driven to necessity, not desiring nor exceeding the limit, then surely your Lord is Forgiving, Merciful. (Qurʼan, Chap al-Anʻam, ayah 145)

6) He has only forbidden to you dead animals, blood, the flesh of swine, and that which has been dedicated to other than Allah. But whoever is forced [by necessity], neither desiring [it] nor transgressing [its limit] – then indeed, Allah is Forgiving and Merciful. (Qurʼan, Chap. an-Nahl, ayah 115)

It is simply ignorance to believe that an animal being slaughtered feels it painful. According to Veterinarians, bleeding to death is one of the least painful and fastest deaths that can occur. While bleeding the body feels sleepy and heavier, the same way when you are exhausted and you need to sleep, this is common between humans and most animals. They suggest that such pain can be reduced to a minimum by using a sharp instrument like blade or knife. Thus compared to being electrocuted to death or receiving a fatal blow to the head, slaughtering is indeed the most human way to kill an animal for consumption.
Nearly two billion of the world’s population is Muslims; one of the fastest growing social groups. That amounts to a lot of potential in terms of economy in the marketplace, something that is already being widely exploited in countries like France and England.

Due to its scientifically established healthy features, Halal products are becoming increasingly important in Germany and other European countries as well. According to the report by Al Jazeera (Nov 26, 2017), there are about 1.8 billion Muslims around the world, who consume only halal meat. The halal-certified food and beverage industry is valued at $415bn. Eight of the 10 largest suppliers of global halal meat are non-Muslim majority countries, with Brazil ($5.19bn), Australia ($2.36bn) and India ($2.28bn) at the top. The remaining seven countries in the list share with France ($0.8bn), China ($0.7bn), Sudan & South Sudan ($0.63bn) Netherlands ($0.59bn), Somalia($0.47bn) and Turkey($0.46bn). (Reuters)
As is evident from the above referred report India is the third largest supplier of meat to the world. It exported meat (only beef) worth Ind. Rs.1029 Cr. during April 2018 to January 2019 period. This is according to the data available with the Agricultural and Processed Food Products Export Development Authority (APEDA), which works under the Ministry of Commerce, Government of India.

Syed Ilyas Basha can be reached at sdilyashyd@yahoo.com

BJP, AAP supporters back meat ‘ban’, Congress voters against it

After hijab vs saffron shawls, it’s now halal vs jhatka in polarised K’taka