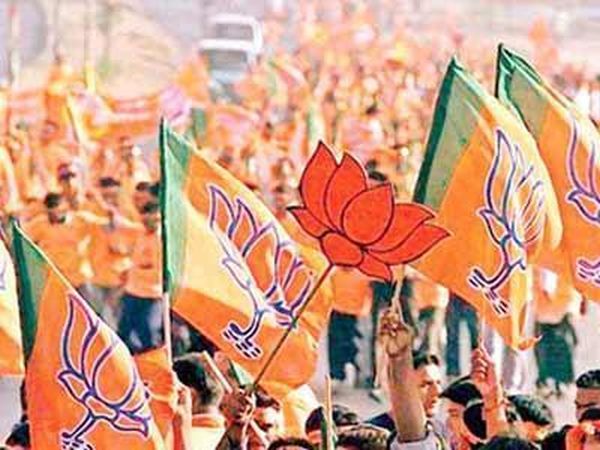 Bengaluru : The ruling BJP is trying hard to make Karnataka its bastion through an aggressive Hindutva agenda and repeyat the success that the party achieved in the last Lok Sabha elections.

The state has 28 Lok Sabha constituencies and the BJP swept 25 seats in the last Lok Sabha polls. The wave was such that former Prime Minister H.D. Deve Gowda suffered a humiliating defeat against the BJP candidate in Tumakuru, which is considered as the turf of regional party JD (S).

However, the trend this time seems to be otherwise. Though the BJP seems to be well placed, the Congress is also looking good under the leadership of Siddaramaiah and D.K. Shivakumar. If these leaders bury their differences and put up a united fight, the BJP will have serious problems. The sidelining of former Chief Minister B.S. Yediyurappa in the party could also prove a setback for the BJP in the state as well as Lok Sabha elections, say party insiders.

Activist Basavaraj Sulibhavi told IANS that it is the inside politics of the Congress and other parties which make them lose to the BJP. The opposition is yet to form a common agenda to come together against the BJP.

In Karnataka there is no wave for the BJP like it was during the 2019 Lok Sabha elections. The Congress can easily win 14 Lok Sabha seats in the state in the next parliamentary elections, Sulibhavi explains.

He opines that the combination of Opposition leader Siddaramaiah and Congress president D.K. Shivakumar can work well against the BJP in the state. But there is the fear of infighting. The Congress lost its Kolar Lok Sabha seat due to insiders.

On the other hand the BJP is polarizing Hindu votes, launching ‘Operation Lotus’, using the central agencies to break alliances and bring down governments. It has done this in 7 to 8 states including Karnataka. The latest example is Maharashtra. Right now, the opposition bloc does not seem to be as formidable as the BJP-led NDA, he says.

The Aam Aadmi party (AAP) says that it will maintain a distance from the Congress and try to bring a new narrative into politics.

Prithvi Reddy, Karnataka Aam Aadmi Party president, told IANS that the AAP does not want to practice the politics of majority or minority. We don’t know vote bank politics. Our vote bank is different. The AAP is inclined to go with regional alliances at the national level rather than going with the Congress. Allying with the Congress will cause more harm to our people.

Talking about the Congress, he says that the party is living on its past glory. They are still talking about their leaders’ struggle for Independence, public sector industries they have built. There is a generation gap. It’s been 75 years since independence. The AAP is the only party which is going to the voters with a clear agenda and votes are being sought based on programmes.

The AAP is the only party which could tell the people that yes emotions are important, but not at the cost of livelihood. “To defeat a formidable force like the BJP, where all central government agencies are working for them, only ‘people’s court’ is left untouched,” he says.

He maintains that the BJP and Congress politics are the same. When you talk about corruption, for example Congress and JD (S) have failed to capitalize on the 40 per cent commission charges against the ruling BJP. The BJP in turn questions them whether they have not practiced corruption?

Prime Minister Narendra Modi has not delivered what he promised to the people and the nation. When elections are around the corner the BJP will come up with emotional issues. The AAP is there to change the narrative, he says.

Whether it is a Muslim or a Hindu, school fee and hospital fee are more important than emotional issues. The narrative has to be changed. We are not trying to beat the national parties at their game. In a survey, if not for PM Modi, who will be the next Prime Minister, 43 per cent named Arvind Kejriwal. So the question is whether PM Modi is beatable? We have beaten him in Delhi and Punjab. We know what it takes to beat PM Modi, Prithvi Reddy says.

In terms of organization and resources it is a challenge for the AAP. The BJP is failing on every front. In the corporate sector 8,000 wealthy people are leaving the country. The hardcore supporters of the BJP have given up on them. If you open your mouth, you will be finished by the BJP, he says.

An atmosphere of hate and fear is there in the country. Our enemies Pakistan and China who are trying to finish off India as a country are taking advantage of this. The BJP is also finishing off India, he says.

Media personality Asha Krishnaswamy, talking to IANS stated that the Opposition parties have continued with a common agenda from 2014 to date — whip Narendra Modi.

“In the elections held since 2014, this opposition agenda has not worked. There are no broader narratives other than targeting Modi for his every move and decision.

“Be it demonetisation, the Covid-19 pandemic induced human misery, or the farm bills and their repercussions, the Prime Minister was at the receiving end. However, voters’ resentment was not reflected in the elections. Even then, the tactics of the opposition have not changed,” Asha Krishnaswamy says.

She adds that the opposition is divided and their moves are haphazard. They are not matching up to the skills and manipulative tactics of the BJP. While the Congress is rudderless, thanks to Sonia Gandhi et al., TRS leader K Chandrashekar Rao’s solo journey, at the most, may end up in disruptive politics.

Sharad Pawar of the NCP may take some time to recover from the Shinde-Fadnavis jolt. Many opposition leaders have surrendered to the BJP, she added.

“A vibrant democracy requires strong opposition parties. I wish to see such a political environment where constructive criticism and narratives are heard,” Krishnaswamy stated.— IANS