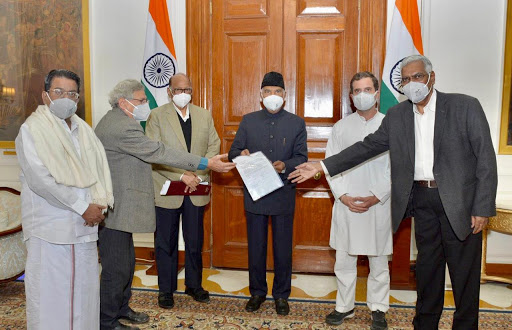 New Delhi: A delegation of opposition leaders which claims to have the support of 25 political parties met President Ram Nath Kovind on Wednesday, and requested him to intervene in the farmers issue and advise the government to repeal the contentious farm laws.

A memorandum submitted to the President by the delegation said, “We urge upon you, as the custodian of the Indian constitution, to persuade your government not to be obdurate and accept the demands raised by Indian Annadatas.”

The delegation in the memorandum said that the Bills were passed in Parliament in an anti-democratic manner preventing a structured debate.

After the meeting, Congress leader Rahul Gandhi said, “the farmers will not sit until the laws are repealed and if these laws are in the interest of farmers why are they on the roads and protesting. We informed the President that it is absolutely critical that these anti-farmer laws are taken back.”

The delegation comprised of Rahul Gandhi of the Congress, Sharad Pawar of the NCP, the CPI(M)’s Sitaram Yechury, D Raja of the CPI and DMK leader Elangovan.

Sharad Pawar said it is the duty of the government to resolve this issue. “All opposition parties had requested for in-depth discussion on farm bills and that they should be sent to a select committee, but unfortunately no suggestion was accepted and the Bills were passed in a hurry.”

The delegation leaders were of the view that the government should take an early decision. As D Raja put it, “As a political party and opposition we cannot sit back and see this.”

The opposition leaders are planning to call a meeting in a few days of those political parties who have supported the farmers agitation and devise a strategy.

Meanwhile the farmers have rejected the draft proposal sent by the Union government. The government had communicated its stand through a written draft proposal to the farmers in which it agreed to two main amendments regarding the Minimum Support Price (MSP) and the Agricultural Produce Market Committee (APMC) but rejected their demand to repeal the three farm laws enacted in September during the Monsoon Session of Parliament.

The move was to break the impasse which has been continuing for the last 14 days on the national capital’s borders with thousands of farmers sitting on the roads, crippling the supply chain.