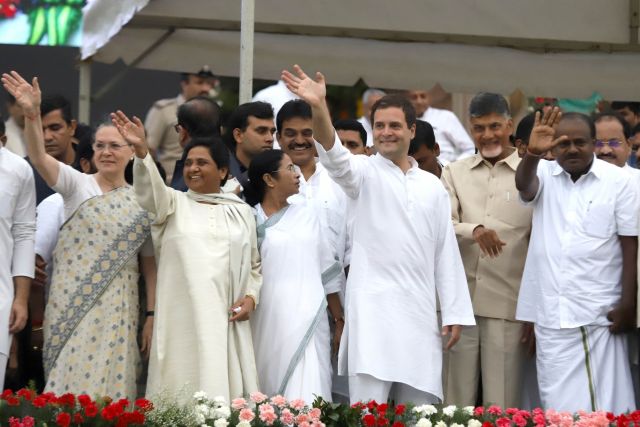 Two mutually reinforcing images from last week may well define the next phase in national affairs. It is too early to call them game changers but they have considerable potential.

The most comprehensive array of opposition leaders, almost a record, who assembled in Bangaluru for H.D. Kumaraswamy’s swearing in as Chief Minister of Karnataka, is significant because it happened despite the contradictions inherent between the various groups in that galaxy.

The occasion produced the man and he better be noticed: Kunwar Danish Ali, the Jamia Millia educated, JD-S spokesman, carried sufficient credibility on both sides to swiftly stitch together the Congress-JD-S alliance in the state. This became the platform on which stood India’s non-BJP diversity. In stitching this extensive hem too, Danish Ali is being applauded by those who know.

Muslims in politics are either too weather beaten or “too Muslim” to navigate diversity. Danish Ali, in my view, is a political animal with a wide reach and one who keeps his faith intensely private. We should hear more about him should the Karnataka experiment remain intact.

The other iconic image was, quite curiously, of a book release. It must have been a few hours of grave national danger, because seldom has the well appointed auditorium of the Claridges hotel been more packed with spies, past and present. For its sheer audacity, Spy Chronicles, RAW, ISI and the Illusion of Peace, is by itself a thrilling title, but when the authorship comes out in sharp silhouette, the revelation takes one’s breath away.

A.S. Dulat, former chief of RAW, and Gen. Asad Durrani, former head of Pakistan’s Inter Services Intelligence (ISI), have put their heads together and have, without compromising fidelity to their respective oaths of office, produced a 320-page document which must now onwards inform those in the subcontinent shaping policy on Kashmir and India-Pakistan relations.

The high-powered congregation in Bengaluru and the brave effort of the Dulat-Durrani duet, both respond to the same national quest – a softer more humane sub continent. Alas, a calmer India, on its own, divorced from the sub continent, is just not possible. It is, likewise, not possible for Pakistan. 1947 was both a blessing and a curse. We could define our separate nations according to our lights but we were also yoked together by geography from which proceed historical and sociological currents which flow forward but also regurgitate into the past.

The first concerted effort to wrench away from the subcontinental centre of gravity came from Pakistan’s dictator, General Zia ul Haq. His push for Nizam-e-Mustafa invited nascent Islamophobia which has metastasized into the modern horror.

Just when fluctuations in Indo-Pakistan ties give way to a seemingly interminable hostility comes the Dulat-Durrani intervention, opening a ventilator in an otherwise suffocating hothouse.

What the book touches on is, in effect, the nub of the matter. Indo-Pakistan initiatives flounder on that ubiquitous document meant for the principal, say, the Prime Minister, marked “for eyes only”. If the Deep State on both sides is the obstacle, why not allow spymasters on both sides to sort out the cobwebs which the principals cannot?

Leftovers from Partition are Kashmir, Pakistan, Hindu-Muslim tensions. If tense communal relations are a requirement for the politics of Hindu consolidation, it follows, as night follows the day, that Kashmir and Indo-Pakistan relations must simmer in perpetuity. They have been placed on auto by our own hands.

To obviate communalism as an essential requirement for electoral politics, it is essential that the motley political crowd on the podium in Bengaluru is regularized. Many societies called it a rainbow coalition.

Both, pre-requisite and a consequence of the Bengaluru experiment is precisely this: tone down social disharmony which communalism aggravates. This end is unachievable without the Dulat-Durrani initiative taking off. Social disharmony, it needs to be stressed, is the overarching malaise under which communalism is played. That is why one photograph that came out of the Bengaluru assembly is epochal – Sonia Gandhi leaning her head against Mayawati’s.

It may be odd to remember Urdu poetry at this juncture but do indulge a line. The most graphic poet, Mir Anis, describes cosmic tumult in which two mutually hostile creatures come together in the face of common danger:

“Shaheen o kabk chhup gayey
Ekja mila ke sar”
(Facing danger, the falcon and the dove put their heads together in the thicket)

Considering that the Congress lost its deposit in the March by-elections in Uttar Pradesh’s Phulpur and Gorakhpur constituencies, Sonia Gandhi would be seen to be in requirement of the BSP supremo, Mayawati’s help. Mayawati may not have been the winner but it was with her help that Akhilesh Yadav’s SP won the two seats.

In this situation what would one make of Congress Election Chief in Madhya Pradesh Digvijay Singh’s statement from Bhopal. He dismissed any tie up with the BSP. Neither was Sonia’s photograph with Mayawati an announcement of a tie up, nor does Digvijay Singh’s reported statement scuttle it. This non-story is only a precursor to what is in store: political busy bodies will load a triangular situation – Congress, BSP, SP – with such heavy voltage speculation that some strand somewhere will snap. The process of coalition building will only be partly in the hands of the principals. To a large extent the process will be conditioned by the din surrounding it which will create misgivings all around as in rapid fire magazines.

The Dulat-Durrani initiative will be subjected to an even more severe ordeal by fire, at least upto 2019. The events of last week provide hope which will generate its opposite – the Pulley principle.

(A senior cmmenator on political and diplomatic affairs, Saeed Naqvi can be reached on saeednaqvi@hotmail.com . The views expressed are personal.)