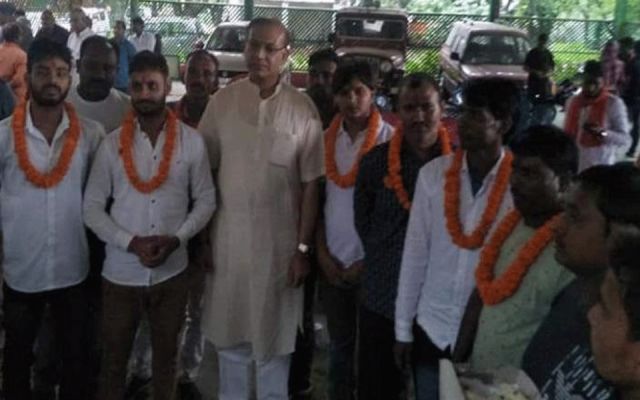 New Delhi : The opposition parties on Saturday slammed Union Minister Jayant Sinha for allegedly honouring Ramgarh lynching convicts after they were released on bail even as the Minister defended his action, saying he had full faith in the judicial system.

Sinha had welcomed by hugging and garlanding the eight men convicted in the Ramgarh lynching case in Jharkhand after they were released on bail on Thursday.

According to reports, the life sentences of the convicts were suspended by the High Court and after getting bail they headed to Sinha’s residence, led by a local BJP leader.

“It is only in ‘New India’, where those who are supposed to get the noose are instead being garlanded,” the Congress said in a tweet.

“The Minister of the BJP-led Central government, which honours those accused of riots, is now garlanding convicts of lynching. Is Modi government encouraging social unstability,” it added.

“We don’t need to look far to see who or which ideology is tearing our social fabric apart: when union ministers patronise those convicted of lynching,” he said in a tweet.

“Jayant Sinha hugs and garlands Ramgarh lynching convicts as they come out on bail. Obviously the junior minister is keen to remain in the good books of his bosses, Modi and Shah, who patronise these lumpen thugs,” he said.

However, Sinha defended his actions and said he had full faith in India’s judicial system and the rule of law. He said while he unequivocally condemned all acts of violence and rejected any type of vigilantism, he had misgivings about the Fast-Track Court judgment sentencing each accused to life imprisonment.

“The rule of law is supreme in India’s constitutional democracy and any unlawful act, particularly those that violate the rights of any citizen, should be punished with the full force of the law.

“Unfortunately, irresponsible statements are being made about my actions when all that I am doing is honouring the due process of law. Those who are innocent will be spared and the guilty will be appropriately punished,” he said in a series of tweets.

Sinha added: “I have repeatedly expressed my misgivings about the Fast-Track Court judgment sentencing each accused to life imprisonment. I am pleased that the High Court will hear the matter as a statutory court of appeal to test the correctness of the Fast-Track Court order.

“In the Ramgarh case, the Ranchi High Court, which is the first court of appeal, has suspended the sentence of the accused and released them on bail while admitting their case. The case will once again be re-heard.”