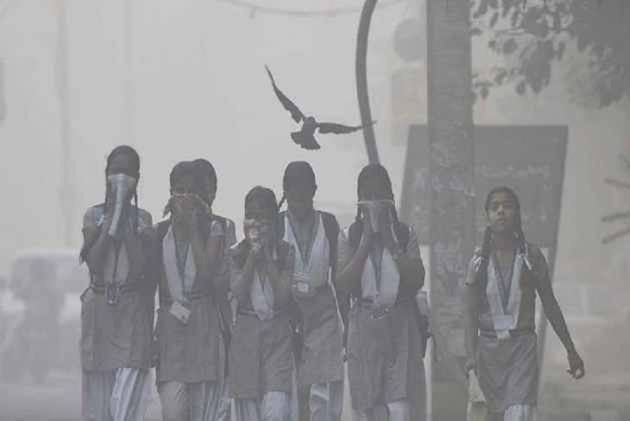 NEW DELHI: Over one lakh children under five years of age died in India in 2016 due to exposure to toxic air, according to a new WHO study which noted that about 98 per cent of children in the same age group in low- and middle-income countries were exposed to air pollution.

In the report, titled ‘Air Pollution and Child Health: Prescribing Clean Air’, deaths of about 600,000 children under 15 years of age in 2016 were attributed to the joint effects of ambient and household air pollution.

Another report by Greenpeace presented a grim picture of India’s pollution level.

The green body’s report said three of the world’s largest nitrogen oxide air pollution emission hotspots that contribute to formation of PM2.5 and ozone are in India with one in the Delhi-NCR.

Delhi-NCR, Sonbhadra in Uttar Pradesh, Singrauli in Madhya Pradesh and Talcher-Angul in Odisha are the hotspots identified. Sonbhadra and Singrauli combined have one hotspot.

It said about 98 per cent of children under the age of five years in low- and middle-income countries, which include nations like India, were exposed to air pollution caused by finer particulate matters in 2016.

Household air pollution from cooking and ambient air pollution caused more than 50 per cent of acute lower respiratory infections in children under five years of age in low- and middle-income countries, it said.

The WHO report examines the heavy toll of both ambient (outside) and household air pollution on the health of the children across world, particularly in low- and middle-income countries, like India.

PM2.5 poses greater harm as being finer, it can easily be inhaled into the respiratory tract.

The PM2.5 has reached dangerous levels in New Delhi in the last two weeks. On Monday, a thick blanket of haze engulfed the city, and an overall air quality index of 348 was recorded, which falls in the very poor category, according to data of the Central Pollution Control Board.

The report noted that air pollution is one of the leading threats to child health, accounting for almost one in 10 deaths in children under five years of age.

“This is inexcusable. Every child should be able to breathe clean air so they can grow and fulfil their full potential,” the official said.

Dr Maria Neira, Director, Department of Public Health, Environmental and Social Determinants of Health, WHO, said, “Air Pollution is stunting our children’s brains, affecting their health in more ways than we suspected.”

“But there are many straight-forward ways to reduce emissions of dangerous pollutants,” Neira said.

The WHO report cited a case study that investigated whether exposure to PM2.5 during pregnancy was associated with low birth weight in an integrated rural-urban, mother-child cohort in Tamil Nadu.

“The researchers recruited 1,285 women in the first trimester of pregnancy in primary health care centres and urban health posts and followed them until the birth of their child to collect data on maternal health, prenatal care, exposure to air pollution during pregnancy and the birthweight of the child,” the study said.

D Saha, an environmentalist, said India is a tropical country and the influence of natural dust is much higher as compared with developed countries.

“The self neutralization of natural dust is much higher as compared to the emitted pollutants,” he said.

The report, launched ahead of the WHO’s first ever Global Conference on Air Pollution and Health, revealed that when pregnant women are exposed to polluted air, they are more likely to give birth prematurely and have small, low birthweight children.