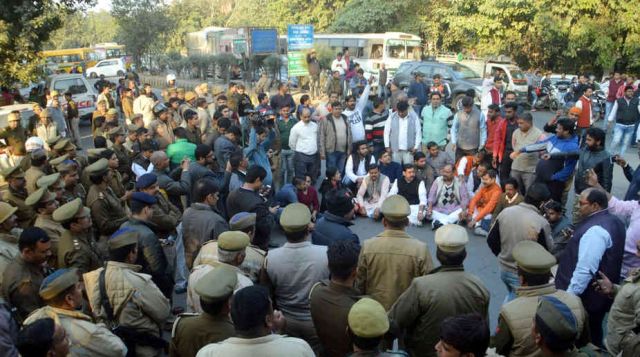 Ghaziabad : Over 100 workers of the BJP and other Hindu outfits, including a dozen-odd leaders, were booked in Ghaziabad on the charge of clashing with police and rioting over the marriage of a Hindu woman with a Muslim man, police said on Saturday.

The case was lodged at midnight Friday by Kavi Nagar police through Sub Inspector Dinesh Sharma under Sections 147, 148, 336, 341, 427, 353 of the Indian Penal Code and Section 7 of the Criminal Law (Amendment) Act.

The accused had allegedly clashed with police earlier in the day in Ghaziabad over the marriage they dubbed as a case of “love jihad” and also staged a sit-in outside the house of the woman’s parents and disrupted traffic.

The woman’s family had organised a wedding reception at their house in Ghaziabad.

Police said they removed the protesters by using mild force on the ground that they were trying to interfere in the personal lives of individuals.

“How can police allow people to barge into someone’s house? We got a distress call and performed our duty accordingly,” Superintendent of Police H.N. Singh said.

The bride’s father Pushpendra Kumar told IANS: “I was receiving phone calls for the last two days to stop the marriage. But both (bride and bridegroom) are majors and mature enough to know what’s wrong and what’s right.”

Bride Nupur Singhal is a psychologist with a Ph.D in Human Psychology, while her husband Mansoor Harhat Khan holds a Master’s in Business Administration and works in a private company. His family originally hails from Aligarh, though his father lives in Delhi but owns a house in Noida as well.