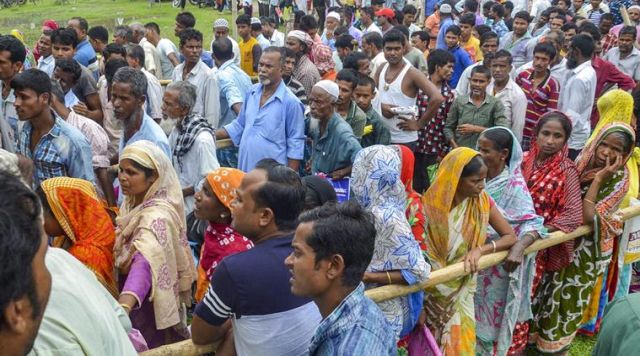 Guwahati : Over 40 lakh of the 3.29 crore applicants have been excluded from Assam’s draft National Register of Citizens (NRC) released on Monday, sparking concerns about their future and triggering a nationwide political row.

Applications of 2.89 crore have been approved in the draft list of citizens, which forms part of a long-running campaign against Bangladeshi immigrants in Assam.

As the controversy over denying citizenship to 40 lakh applicants brewed, the central government urged people not to panic and asked the opposition not to politicise the issue.

Registrar General of India Sailesh, who released the draft, said “ample opportunity” would be given to these applicants if they file claims and objections between August 30 and September 28 before the final list is prepared.

The process to finalise the list should be done by December 31, 2018.

“This is a draft NRC and not the final NRC. All genuine Indian citizens whose names did not figure in the NRC will get ample opportunities to enter their names in the final NRC,” Sailesh said, terming the day “historic”.

NRC State Coordinator Prateek Hajela said the 40,07,707 people whose names did not figure in the list would be intimated through separate letters about the discrepancies and their details would not be disclosed.

Amid concerns, Satyendra Garg, Joint Secretary (Northeast) in the Union Home Ministry in Delhi, said none of those whose names do not figure in the list will be taken to any detention camp or foreigners’ tribunals.

Security in Assam was intensified after apprehensions that there might be trouble following the publication of the draft NRC.

Critics of the citizenship registry say the move seeks to drive out immigrant Muslims from Assam and was majorly supported by the Bharatiya Janata Party (BJP) — which rules the state.

West Bengal Chief Minister Mamata Banerjee slammed the Assam and Modi governments and alleged that those having Aadhaar card, voter identity and others documents were excluded as the authorities were “not satisfied”.

“Forty lakh people including Hindus and Muslims were left out. All connections including Internet have been disconnected which is unfortunate. Why were connections cut? We are not able to contact them. Is it an attempt to bulldoze them?,” Banerjee asked in Kolkata.

Opposition parties led by the Trinamool and the Samajwadi Party created an uproar in the Rajya Sabha, forcing repeated disruptions and finally adjournment for the day.

The Congress asked the government to convene an all-party meet for a discussion on steps to ensure that no Indian citizen was left out.

“The government must immediately call a meeting of leaders of all parties and should inform about the steps it proposes to take,” senior Congress spokesperson Anand Sharma said.

Union Home Minister Rajnath Singh told the Lok Sabha that it was “only a draft and not the final NRC” and appealed to the opposition not to politicise the “sensitive” issue.

“Whatever work is going on in the NRC is happening under the supervision of the Supreme Court. To say that the government has done it and it is inhuman and brutal… such allegations are baseless. There is no question of any coercive action against anyone,” he said.

“Some people are unnecessarily trying to create an atmosphere of fear… Some misinformation is being spread. Some people may not have been able to submit necessary documents. They will get full opportunity through Claims and Objections process.”

The Assam government started the process of updating the NRC in December 2013. All residents in the state were asked to produce documents proving that they or their families had lived in India before March 24, 1971.