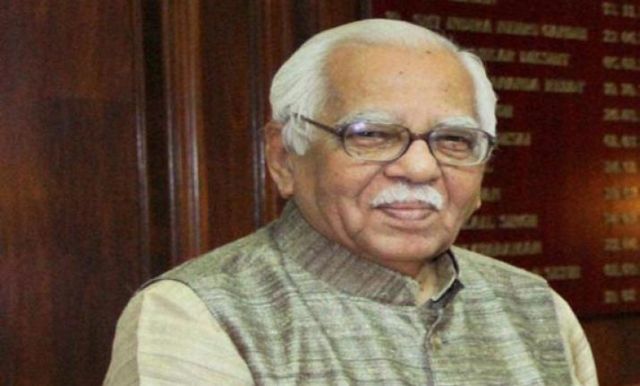 Lucknow : Uttar Pradesh Governor Ram Naik, who is at the centre of a storm over the state government decreeing that the name of B.R. Ambedkar, considered the architect of the Indian Constitution, be officially expanded to Bhimrao Ramji Ambedkar, is unfazed by the controversy it has created, but says he is “deeply pained” at the insinuations made by political parties.

He dismisses all accusations of political motivation behind his efforts in renaming Ambedkar, saying the Dalit icon was his hero from his younger days.

He said he found that Ambedkar had himself signed his name as “Bhimrao Ramji Ambedkar” in the original copy of the Constitution where all the other members of the Constituent assembly, including its Chairman, Rajendra Prasad, who later became President of India, and Jawaharlal Nehru had put their signatures.

He shared this information with Chief Minister Yogi Adityanath and a request was made to remove this “major inaccuracy” in Ambedkar’s name.

“This needed an amendment in the Act, but Yogi Adityanath assured me that once the session of the UP Assembly was underway the course correction shall be done,” he said.

Naik expressed surprise that when the Bill on the new name was unanimously passed in the UP house on December 29 last year “how can Samajwadi Party (SP) and the Bahujan Samaj Party (BSP) question it now?”

Naik said soon after that he wrote to BSP supremo Mayawati and even Ambedkar’s grandson, seeking their help in dissemination of information that the corrected full name of the Dalit legend was Bhimrao Ramji Ambedkar.

“I have been an admirer of the Dalit leader since the 1950s, when I went to Mumbai in search of a job. I have heard him speak at various public rallies,” Naik told IANS.

“My admiration, and that of even the Jana Sangh, for Baba Saheb, has always been there and it is sad that people find political motives in things which have nothing to do with it.

“Like Mahatma Gandhi, even Ambedkar was above politics and cannot be owned by any group, political party or an individual,” he said.

He recalled that in 1989, he had raised a question in the Lok Sabha to the then Telecom Minister, K.P. Unnikrishnan, on whether the government planned to release a postal stamp to commemorate the birth anniversary of the Dalit icon.

“I was informed that the Union government had no such plans.”

Naik, a five-time MP and a former Union minister, said that the minister then responded by saying that 15 paisa and 20 paisa stamps on Ambedkar were released in the past on April 14, 1966, and April 14, 1973.

Later, then Prime Minister Chandra Shekhar not only formed a committee to look into this aspect but it also ensured that, in 1991, a postal stamp was released on the Dalit stalwart. This stamp too, he pointed out, carried his real and full name.

Asked how, all of a sudden, the effort of getting Ambedkar’s name changed got rolling, the Governor said the move stemmed from an invitation he received from the Vice Chancellor of the Bhimrao Ambedkar University in Agra for its convocation ceremony.

“I said it was the wrong way to write Ambedkarji’s name, to which he responded by saying, ‘Saab, yahaan aisa hi chalta hai (Sir, this is how things happen here),” Naik said, adding that he then pored over several government documents and went through the original copy of the constitution.

“Everything that needs change cannot be held on belief and should have legal backing to have constitutional validation,” he said.

Questioning the political sparring his move has now triggered in the state, with the BSP alleging that he had connived with the ruling BJP, specially with his roots in the Rashtriya Swayamsewak Sangh (RSS), the governor said possibly these people and parties do not know how he had launched a “satyagraha” and served six days in prison to get the name of Ambedkar to the Marathwada University in Maharashtra.

Listing his “zara hatke” (somewhat different) moves as a legislator and then as an MP, including pitching in for double-storied toilets in Mumbai’s slums, infrastructure facilities for people at Gorai, Manori island, and the start of the MPLAD funds for lawmakers, the governor said he had done what he thought was correct and right.