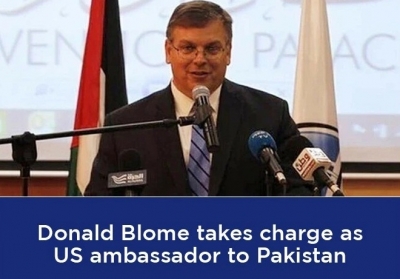 New Delhi : Unable to get an audience with the Pakistani President Arif Alvi to present his credentials, the new US ambassador to Pakistan Donald Armin Blome submitted his papers to the Pakistani foreign office and quietly started his work.

Quoting diplomatic sources, The News reported that Blome had arrived in Islamabad and the Pakistani foreign office had requested the President to give the new envoy time so that he could ceremonially present his credentials-a diplomatic tradition. But the President, an established ally of ousted Prime Minister Imran Khan refused to give the audience even after 10 days of the request. Finally, foreign minister Bilawal Zardari Bhutto asked the Pakistani foreign office to step in.

After that Blome’s first official engagement was to visit the Pakistan Stock Exchange on Tuesday.

According to the report, the Pakistani office foreign office was hopeful that Alvi wouldn’t play with the dignity of his office and breach diplomatic protocol. Alvi was apparently instructed by the ousted premier Khan not to receive credentials of an envoy who belonged to an “enemy” country. For long Khan has been claiming that the US worked behind- the- scenes to bring down his government, purportedly because Washington was furious with his “independent” foreign policy choices. The former PM also blamed the European Union and US allies for being part of the “conspiracy.”

But Alvi may have to pay a price for his defiance. According to Pakistani watchers, “if Alvi opted to refuse or go for further undue delay in receiving the credentials of the ambassador, he could be relieved of the honour to receive the credentials. The presentation of credentials is a tradition that brings dignity and formality in the working of a new ambassador.”

Earlier President Alvi had also refused to administer the oath of office to the new premier Shehbaz Sharif and his cabinet ministers. Alvi excused himself from conducting his constitutional obligations by claiming he was “sick”.

Alvi has made it clear that as long as he is the president of the country, he will pose a challenge to the working of the Sharif-led coalition government. According to the Pakistani constitution, the rules of business set out all the matters which are done on orders of the president – on the advice of the PM. Under that system, the president has limited ruling powers, and performs ceremonial duties while the Prime Minister enjoys more powers to execute decisions.

According to Pakistani sources, after Imran Khan’s ouster, Alvi wanted to resign but the mercurial Khan asked him to remain and make it impossible for the Sharif-led government to function smoothly.— IANS