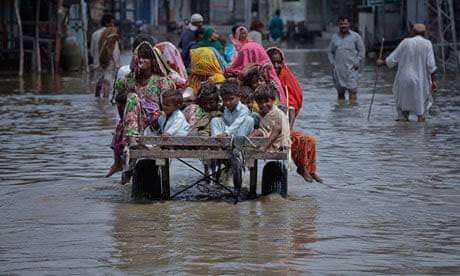 ISLAMABAD : A Unicef representative in Pakistan said that an estimated 16 million children have been impacted by the “super floods” and at least 3.4 million girls and boys remain in need of immediate, lifesaving support.

In a statement, Abdullah Fadil, who recently concluded a two-day visit to the flood-affected areas of Sindh, said the situation was extremely grim in flood-hit areas with malnourished children battling diarrhoea, dengue fever and several painful skin diseases, Dawn reported.

Fadil said floods had now claimed the lives of at least 528 children and each and every one of these deaths was a tragedy which could have been averted.

The Japanese government on Friday announced $7 million, while the Canadian government pledged C$3 million for the flood-hit people.

“The sad reality is that without a massive increase in support and aid, many more children will lose their lives,” Dawn news quoted the Unicef representative as saying.

“A lot of the mothers are anaemic and malnourished themselves and have very low-weight babies. Mothers are exhausted or ill and they are unable to breastfeed. Millions of families have been forced from their homes, now living with little more than rags to protect themselves from the scorching sun as temperatures in some areas pass 40 degrees Celsius.

“Many families have been forced to seek shelter on slivers of higher ground, often alongside roads putting children at risk, as lower land is covered by huge expanses of stagnant water, extending as far as the eye can see. The additional threats of snakes, scorpions and mosquitoes are ever-present in the area,” Fadil said. — IANS