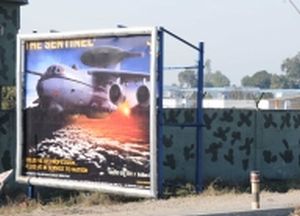 Mumbai, Jan 2 : BJP-ally Shiv Sena on Saturday strongly condemned the fidayeen attack at an Indian Air Force base in Pathankot in Punjab and said that terrorism and peace talks (with Pakistan) could not go together.

“We are not playing politics, but it’s a fact that the bilateral peace talks and terror attacks take place simultaneously… terror and peace talks can’t go together,” Sena leader and party’s Rajya Sabha MP Sanjay Raut said in a statement.

Shiv Sena is a coalition partner of the ruling BJP-led National Democratic Alliance at the Centre and Maharashtra.

Raut, editor of the party mouthpiece ‘Saamana’, expressed concern that the terror strike in Pathankot – which resulted in the killing of three IAF personnel and five terrorists suspected to have crossed over from Pakistan – occurred “within a week of Prime Minister Narendra Modi’s unscheduled stopover in Lahore on December 25”.

The Sena had questioned Modi’s halt in Pakistan to greet that country’s Prime Minister Nawaz Sharif on his birthday last week.

“Merely saying (that) the country will give a befitting reply to such attacks is not enough. When shall we give a befitting response to Pakistan,” Raut asked, adding however that union Home Minister Rajnath “was a serious person and the party respected him”.

As for alleged Pakistan involvement in this attack, Raut said: “There is no need to say who is behind the attack… we can say with our eyes closed that the attackers are from Pakistan.”—IANS