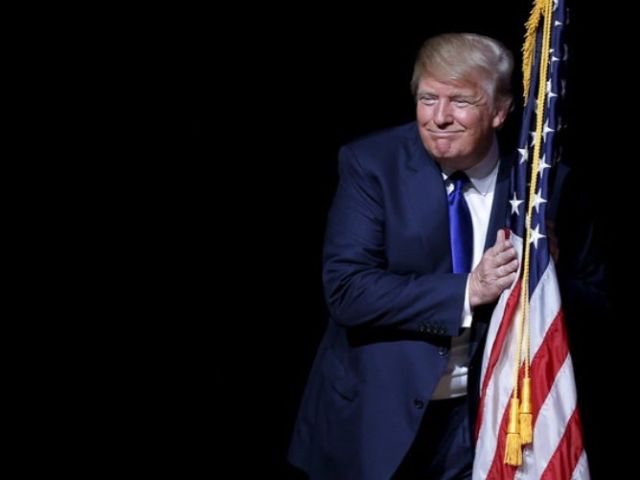 New York : In a speech bubbling with patriotism and economic policy of America First, President Donald Trump has reiterated the US’ commitment to strengthen its military, protect its borders and reset its trading relationships and appealed to a divided Congress for support.

“The era of economic surrender is over,” Trump declared in his first State of the Union address to Congress on Tuesday night in Washington and said, “We will work to fix bad trade deals and negotiate new ones.”

“We will protect American workers and American intellectual property, through strong enforcement of our trade rules,” he said.

Trump spoke for an hour and 20 minutes in the House chamber of Congress against the backdrop of a large American flag, with Vice President Mike Pence and Speaker Paul Ryan seated behind him.

The Republicans and their supporters repeatedly cheered Trump, while the Democrats, who did not boycott the speech, sat stoically.

The speech, mostly devoted to domestic issues, was punctuated with spectacles for television with Trump calling out to crime victims, business people, beneficiaries of his economic programmes, soldiers, a crippled North Korean refugee and others seated in the audience with anecdotes about them as the cameras zoomed on them amid audience applause.

In a manouevre that mirrors the Congress Party in India, the Democratic Party brought out Representative Joe Kennedy, who is the grandson of the late Robert Kennedy and grandnephew of John F. Kennedy, to deliver the party’s response to Trump.

In outlining his strategic perspective, Trump lumped China and Russia with rogue regimes and terrorist groups that “challenge our interests, our economy, and our values”.

“In confronting these dangers, we know that weakness is the surest path to conflict, and unmatched power is the surest means of our defence,” Trump said, calling on the Congress to fully fund the military.

He included the nuclear arsenal in discussing his defence agenda.

“We must modernise and rebuild our nuclear arsenal, hopefully never having to use it, but making it so strong and powerful that it will deter any acts of aggression,” he said.

In fighting terrorism, Trump recalled his pledge “to extinguish IS from the face of the Earth” and said that the US and its allies have “liberated almost 100 per cent of the territory once held by these killers in Iraq and Syria”.

To combat the Islamic State and the Al Qaeda, Trump asked Congress to ensure “we continue to have all necessary power to detain terrorists — wherever we chase them down”.

“Our warriors in Afghanistan also have new rules of engagement,” Trump said, repeating a dig at former President Barack Obama’s administration, saying, “Along with their heroic Afghan partners, our military is no longer undermined by artificial timelines, and we no longer tell our enemies our plans.”

Trump recalled the UN General Assembly resolution criticising Washington’s decision to recognise Jerusalem as the capital of Israel and move its embassy there.

He used it to push another aspect of his America First policy, Trump asked the Congress to enact laws to ensure that “American foreign-assistance dollars always serve American interests, and only go to America’s friends”.

Iran and North Korea came in for special attention. He criticised the nuclear deal made by the US, the other permanent members of the UN Security Council and Germany with Iran to end its nuclear proliferation and also accused it of destabilising the region.

“North Korea’s reckless pursuit of nuclear missiles could very soon threaten our homeland,” Trump acknowledged. “We are waging a campaign of maximum pressure to prevent that from happening.”

In another criticism of his predecessors, Trump said, “Past experience has taught us that complacency and concessions only invite aggression and provocation.

“I will not repeat the mistakes of past administrations that got us into this dangerous position.”