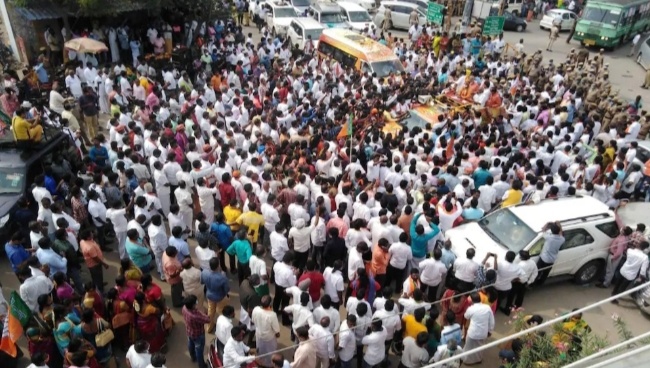 Chennai: As Tamilnadu legislative assembly elections are getting closer, the state BJP is attempting to whip up communal passions in the state in order to divert the anti-Modi sentiments of people and to hide its ugly face.

Political analysts said the saffron party is trying to get a foothold in the anti- Brahmanism citadel of politics known as Dravidian movement.

As  the Ram mandir  and Ganesh chathurthi sentiments didn’t evoke any response  in this southern state,  BJP people are now  involving   Tamil God ‘Murugan’ in  their political strategy to stir  the Tamil sentiments. TN BJP chief L Murugan is kept organizing “VelYatra” which is almost similar to Rath yatra in North led by BJP senior leader LK Advani which left behind bloodshed and communal tensions in the country.

Since BJP never got representation in TN legislative assembly nor any of their MLA turned victorious in the history.  BJP leaders hope that   “VelYathra” may bring good political fortune for them.

The main contest will be between the opposition DMK–led alliance and the ruling AIADMK as usual. However, this time the BJP is trying to grab public attention. Murugan has shown much concern in this regard and he has been very active since he took over reins of the party. Murugan maintained that at press conferences that we have been making efforts to send   a good number MLA this time.

He also boasted that the saffron flag will soon be hoisted in the George fort, Chennai.

As BJP is infamous for instigating violence using   Yatras, there is apprehension of communal trouble in the state. Murugan has come up with the idea when the issue of Kanthashishti Kavasam became the talk of the state where a Person from KarupparKootam, an atheist based YouTube channel who criticized the spiritual song of Lord Murugan sparked controversy. The BJP and Nagpur based organizations believe that the Velyatra could propel BJP to realize their Tamilnadu dream.