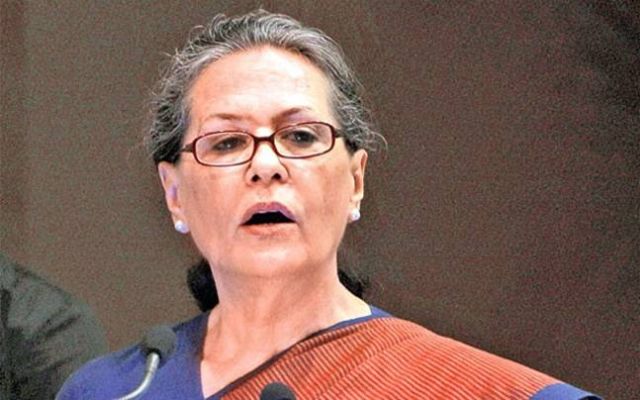 Addressing a meeting of Congress Parliamentary Party here, she accused the Modi government of allowing polarisation of society for political gains and said there would be similar attempts in Karnataka, which goes to polls later in 2018.

Gandhi’s attack on Modi and his government came a day after the Prime Minister launched a blistering attack on the Congress in both the Houses of Parliament during the debate on the Montion of Thanks to the President’s address.

She said the “arrogance and dishonesty” tells everyone that the Modi government “lives by its own propaganda and lies”.

“We need no further evidence of this than the Prime Minister’s speech in the Lok Sabha yesterday morning.”

Terming it as “maximum marketing, minimum delivery” government, she said the ruling alliance was out of touch with reality and was recycling UPA schemes.

Gandhi made several sharp attacks at the NDA government, saying the union budget was full of “sleights of hand – of jumlas” and asked why it was not giving price details of the Rafale fighter deal.

Referring to the death of Justice B.H. Loya, she accused the government of refusing “to respond to wholly justified demands to satisfactorily investigate certain sensitive legal cases of far reaching political consequence”.

Gandhi said the nearly four years of Modi government has been a period in which institutions that are at the foundation of the country’s democracy “have come under systematic assault — Parliament itself, the judiciary, the media and civil society”.

“Investigative agencies have been let loose against political opponents. An all-pervasive atmosphere of fear and intimidation has been created. Liberal, secular and democratic traditions are being wantonly damaged. The pluralistic nature of our society — which has been its strength for centuries — is being eroded,” she said.

She said minorities were feeling unsafe and being subjected to barbarous attacks and Dalits and women have come under renewed and widespread atrocities.

“In many cases this violence, specially against the minorities and Dalits, is not sporadic or random but orchestrated to polarise our society for narrow political gains.

“We saw this in both Uttar Pradesh and Gujarat. We will no doubt see it again in Karnataka. Such polarisation is criminal in a democracy, yet those in power look the other way,” she said.

Gandhi said tall claims are being made of so-called economic achievements, but agriculture continues to be in “deep distress” and the desperation of farmers is evident in the number of suicides.

She said new jobs were not being created and existing ones were being lost.

“Employment cannot happen without new investments and the fact is that there has been a marked decline in the rate of investment over the past four years.”

Referring to the budget, she said the promise to double farmers’ income in five years was impossible to achieve, increased support prices had been declared without clarifying their basis and a revised health insurance scheme has been passed off as new and “proposed without adequate preparation or worse, budgetary support”.

She said the government was simply recycling UPA schemes and unveiling them with the flourish of a magician.

“True, the new names are catchy and colourful, perhaps much more so than during our time, we must admit,” she said.

“But this seems to be a game of Maximum Publicity, Minimum Government, or put another way, Maximum Marketing, Minimum Delivery.

“If this government is to be believed, India had accomplished nothing before May 2014,” Gandhi said.

Noting that cross-border terrorism has to be dealt with forcefully, she said Jammu and Kashmir continues to bleed.

“Where is the healing touch, where is the developmental thrust, where is the political engagement that was so much in evidence when Manmohan Singh was Prime Minister,” she asked, adding that there were no details of an accord concerning Nagaland even after two years.

Referring to foreign policy, she said relations with some of the most important neighbours “have never been as bad as they are now”.

“Personalised diplomacy and public bear-hugs are all very well but there is no substitute for institutionalised processes, for hard work and preparation, and for continuity in our national policies,” she said.