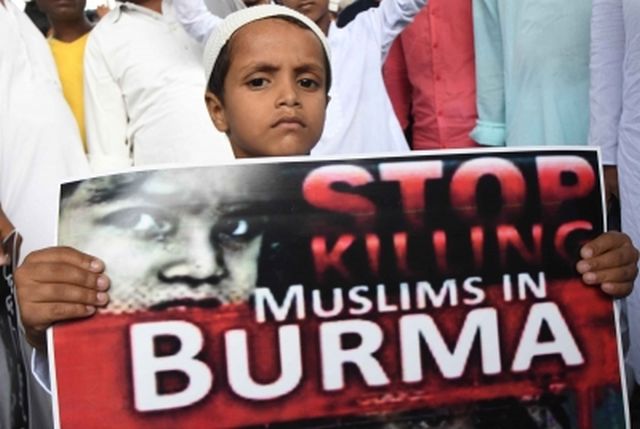 Kuala Lumpur : An international people’s tribunal on Friday held Myanmar guilty of “genocide” against Rohingya Muslims and said the “systematic targeting of civilians” and other acts committed by the Myanmar Army must be qualified as war crimes.

A seven-member bench of Permanent People’s Tribunal (PPT), holding proceedings on alleged atrocities and state crimes against the Rohingya, Kachins and other ethnic minority groups in Myanmar, said the Myanmar army was committing the crime in the “context of official duties”.

Amid the backdrop of tens of thousands of Rohingya Muslims fleeing persecution in their country, the PPT held proceedings in Kuala Lumpur and heard victims from the Myanmar ethnic communities, recorded their testimonies on their experiences in a court-like setting from September 18-22 at Universiti Malaya’s Faculty of Law.

The purpose of the Rome-based PPT tribunal was to “expose” the alleged inhuman treatment to Rohingyas and push to stop the crimes.

The findings (judgement) of the opinion tribunal will be given to international bodies, especially the United Nations, for further action to be taken against Myanmar to end the violence.

The findings are not legally binding and cannot be enforced by law.

In its judgement, the bench said that from the evidence presented before the tribunal, it is clear that the general intent of the government of Myanmar has been to “destroy the identity of these different groups as a part of the Myanmar community”.

The attack by the Myanmar military is “intentionally” directed against the civilian population or against individual civilians not taking direct part in hostilities, said the bench.

The tribunal said it has watched, on the screen, “the images of shellings on wretched villages; was shown photographic evidence of dead bodies and of tortured persons and heard accounts of violence of witnesses and of victims. The victims were not combatants.”

The systematic targeting of civilians and all of the other acts committed by the Myanmar Army “must be qualified, for all legal purposes, as war crimes committed as part of a plan or policy or as part of a large-scale commission of such crimes”, it opined.

“The limited and incomplete democracy” of Myanmar, “yet strongly dependent on military power, shows, in this conflict, intolerance and lack of respect for human rights and reveals its negative and dark side, conflicting with the principles of civilisation and with the religious beliefs of its people”, said the tribunal.

The tribunal heard first-hand horrific accounts of Rohingya women who had been raped in their homes in Rakhine State by the military forces. These women also witnessed other women who were raped or gang-raped in front of their eyes.

The four survivors’ testimonies also presented a horrific pattern that the Rohingya women who had been raped by the military were raped again several times and for months by the smugglers and other people who took advantage of the situation, in all their way from Rakhine to Thailand and Malaysia.

These Rohingya women were also subjected to other forms of physical and psychological sexual violence such as violation of bodies’ integrity by groping their private parts during body search as well as forcing them to undress in public.

The Tribunal heard several testimonies of Rohingya refugees forced to leave their homes and their country, by border guard and other army forces accompanied by Rakhine Buddhist mobs, sometimes including monks.

The Rohingya, a stateless mostly Muslim minority in Buddhist-majority Rakhine, have long experienced persecution in Myanmar, which calls them illegal immigrants.

Rights groups accused the Myanmar military of burning Rohingya villages, raping women. But the Army said it was responding to attacks by militants and has denied targeting civilians, a claim refuted by Rohingyas.

More than 400,000 Rohingya Muslims have fled Myanmar’s Rakhine across the border to Bangladesh since August 25.

(Garima Tyagi is in Malaysia on the invite of the Permanent People’s Tribunal (PPT) and can be reached at garima.t@ians.in)