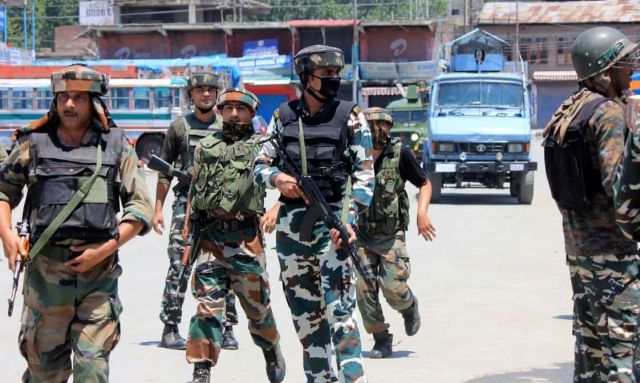 Jammu/Srinagar : It’s been a fairly turbulent year in the state, both security-wise and politically. It saw more violence compared to last year, even though the security forces killed many militants, including some top commanders of militant outfits.

There were 587 incidents of violence during 2018 compared to 329 last year. Official figures say 240 militants were killed during the year against 200 last year.

Permanent peace eluded the state in 2018 as it has during more than 30-years of strife.

According to senior intelligence officers, there are still around 240 militants, including foreigners, who are active in the state.

“The number keeps on varying depending upon infiltration of new militants from across the line of control (LoC) and recruitment of local youth into militant ranks”, said a senior intelligence officer.

Summing up the security scenario, Lieutenant General A.K. Bhatt, who commands the Srinagar-headquartered 15 corps of the Indian Army and is the senior-most army officer in the Valley, said: “The security forces have a limited role in controlling the ground situation in the state. The final solution has to be political.”

On the political front, there was a dramatic turn in June when the right-wing Bharatiya Janata Party (BJP) suddenly announced in New Delhi that it was withdrawing from the ruling coalition in the state, headed by the Peoples Democratic Party.

The announcement was not unexpected as the two ideologically opposed parties were ruling the state for four years through an uneasy arrangement that appeared brittle from day one since the late Mufti Muhammad Sayeed announced it in 2015.

With the withdrawal of BJP support, the Mehbooba Mufti-led coalition fell and Governor N.N.Vohra dismissed the government, even though the state assembly was kept in suspended animation for any future alliance to stake claim to power.

Vohra was subsequently replaced by Satya Pal Malik who became the first politician to be made the state governor. As compared to his predecessor, Malik chose to speak to media as often as he could to put forth his view point, sometimes to the embarrassment of both New Delhi and Malik himself.

The fist thing the new governor did was to announce local urban bodies and panchayat elections in the state. Both these democratic processes were concluded peacefully throughout the state and their conduct is considered a feather in the administration’s cap as the elected government had been shying away from conducting the elections.

With the imposition of governor’s rule, the PDP started suffering desertions as some of its dissident legislators launched an open rebellion against the party leadership. In the forefront of the dissidents was senior Shia leader and former state minister Imran Ansari who finally joined the Peoples Conference (PC) headed by Sajad Lone, himself a former minister in the PDP-BJP coalition government.

Sajad’s PC started emerging as the possible Third Front that could, in future, pose a challenge to both the PDP and the regional National Conference (NC) headed by Farooq Abdullah.

Ever since the elected government fell, rumours started doing the rounds in the state that dissidents in the PDP, the NC and even the Congress party were waiting in wings to join the Third Front. The visit of BJP general secretary Ram Madhav to the state and his meetings with Sajad Lone and dissidents kept fuelling these rumours even when Madhav said there was no immediate move to form a government in the state.

The fear of their flock being poached pushed the arch rivals, the NC and the PDP, come close to each other. In a surprise move, Altaf Bukhari, senior PDP leader and former minister emerged as the contender for the Chief Minister’s post with outside support by the NC. With the NC’s 15 and the PDP’s 29 seats, the two parties hold a simple majority in the 87-member state assembly.

The NC and the PDP said they had decided to sink their differences to protect the special status of the state as article 35-A and other constitutional provisions were being challenged to dilute this.

There were also reports that the Congress was in the loop to shoot down horse-trading in the state. The PDP president, Mehbooba Mufti, sent a fax to the Raj Bhawan seeking an appointment with the Governor to stake claim to power. The fax was never received as the Governor said later the fax operator at the Raj Bhawan was off duty due to a holiday.

Amid claims and counter-claims, Governor Malik, in a dramatic move, dissolved the state assembly on November 21, justifying this by saying that he wanted to “prevent horse-trading”.

The possibility of any dialogue between the centre and the separatist leadership remained a distant possibility during the year. In all likelihood, this will have to wait till a new government takes office at the centre after the 2019 general elections in the country.

Elections to the state assembly are also likely to be held simultaneously with the 2019 Lok Sabha elections around April-May next year.