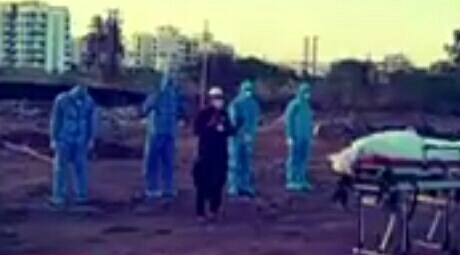 Mumbai:  In an attempt to outsmart its former ally, Shiv Sena which now leads the Maharashtra state coalition government, former Maharashtra chief minister and state BJP leader Devendra Fadnavis has dragged the name of social organization Popular Front of India (PFI) to attack Chief Minister Uddhav Thackeray. Brihanmumbai Municipal Corporation (BMC), which is controlled by the Shiv Sena, has granted permission PFI to facilitate burial of Muslim and   to cremate non-Muslim victims of Covid-19 as the fear catching pandemic drives relatives of victims away who refuse to claim bodies.

Despite, PFI is rendering a yeoman service to the humanity under these difficult circumstances, former CM sought to play on politics on this very sensitive issue asking the Uddhav Thackeray government to clear its stand on the decision of BMC.

The civic body’s order issued last month states, “Whenever there is a suspected Covid-19 death of a Muslim person, all hospitals should inform coordinators of the PFI. Task force team of PFI will facilitate burial…”

Fadnavis tweeted the BMC order, dated May 18, entrusting PFI with the task.

In his tweet, Fadnavis, Leader of Opposition in Maharashtra Assembly, asked, “Shocked to know @mybmc [BMC] giving legitimacy to organisation like Popular Front of India, allegedly known for anti-national & anti-social activities. CM @OfficeofUT ji [Uddhav] do you agree to this? If not, will you take strong action?”

It is interesting, Fadnavis did not raise any objection when Pune Municipal Corporation has roped PFI volunteers in for such burials which ruled by his party BJP.

PFI volunteers pointed out that BJP-ruled Pune Municipal Corporation was the first to rope them in for such burials. Saeed Choudhary, a PFI volunteer, said, “In April, they (PMC) asked us to help with burials. We wanted to help, as there were a lot of problems around Muslims burials. In Pune we have buried 103 bodies.”

According Indian Express, a group of volunteers affiliated to PFI have been working with civic bodies across the state to help with burials of Covid-19 patients, especially since Muslim families are facing opposition from community graveyards for burial of coronavirus patients. The group has helped bury  over 200 bodies across the state till date, none yet in Mumbai.

Additional municipal commissioner, BMC, Suresh Kakani said, “They (PFI) approached us to offer help…. Relatives are not willing to touch the bodies…We need help in disposing the bodies.”

Since the spike in Covid deaths, relatives of the deceased refused to come forward to accept the bodies leading to the pile-up in hospitals across the country.

“The bodies are lying at the hospital because relatives do not turn up to claim (the bodies) for fear of getting infected,” a counsel of government told the High Court bench during the virtual hearing.

Reacting on BJP leader’s remarks, PFI national executive member, E M Abdul Rahiman said it is unfortunate that even in time of human crisis, the RSS-BJP and its controlled Media did not miss the opportunity to tarnish the image of PFI as its volunteers have been serving the humanity by putting their lives at great risk. Instead of lauding their (PFI) efforts, courage and dedication, they (BJP) are trying to demonize them, he said.

On the RSS-BJP allegations, Rahiman said, “Our legitimacy is a proven fact, among the masses, earned by sweat and blood; not by any TV screen, government paper and ink.”

He also posed a question to ex CM Fadnavis that why he didn’t  raise  any hue and cry when the BJP-ruled Pune Municipal Corporation had itself persuaded PFI volunteers for this purpose.