A  report on Phagwara communal clash reveals that when Shiv Sainiks attacked Muslims  on Friday , not only Sikhs but Dalits also joined them and gave a tough time to Shiv Sainiks , chased them  away  who entered a temple and a neighboring building  . Given below is a report by IP Sing which was published in Times of India on what exactly happened in Phagwara. 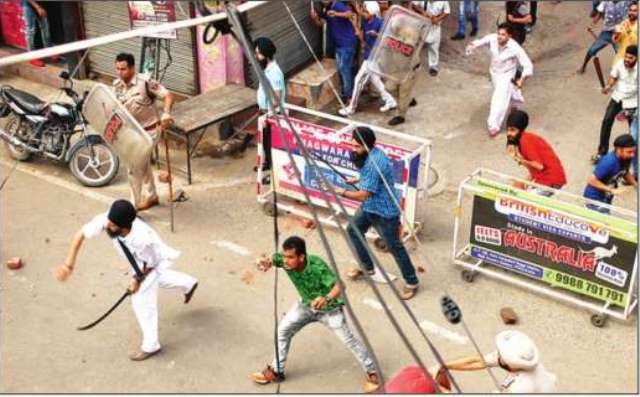 Phagwara : The tension in Phagwara, simmering since Wednesday after local Shiv Sena activists targeted some shops of Kashmiris, led to a clash on Friday between Sena activists on one side and Muslims, Sikhs, and Dalits on the other.

Police have registered a case against eight Shiv Sena leaders and 40-50 unidentified persons.

The clash took place after Sena leaders pelted stones on a mosque, abused Muslims, and attacked their shops. It is learnt that the situation turned from bad to worse, even as there were intelligence inputs apprehending a clash. Cops had managed to avert a clash once, but Sena activists again came near the mosque, challenging Muslims and pelting stones, after which the latter retaliated.

Muslims had earlier announced that they would take a procession to the SDM’s office on Friday to submit a memorandum. However, Phagwara SP Ajinder Singh urged them not to take out any procession. In the meantime, Sena activists came near the mosque and burnt a Pakistani flag. After this, weekly prayers were held inside the mosque, and Sena activists took out a procession in the town. After this march, they again came near the mosque, despite police officials pleading with them not to proceed to the mosque.

In the meantime, local Sikh and Dalit activists came out to support the Muslims, and chased away Sena activists who entered a temple and a neighbouring building, from where they started pelting brickbats from rooftops, which also hit the cops. Muslim, Sikh, and Dalit activists also retaliated with brickbats, during which the glass shield of an idol on the temple gate was damaged. Police had a tough time controlling the situa tion, and resorted to canecharge to control the situation.

On the complaint of a mosque imam, police booked Shiv Sena leaders Inderjit Karwal, Kuldeep Dani, and Jimmy Karwal, besides Hindu Suraksha Samiti president Deepak Bhardwaj, among eight identified per sons under sections of IPC and the Arms Act. Later, Sena supporters gathered in a temple on GT Road, and gave a call for Phagwara bandh on Saturday, while Muslims, Sikhs, and Dalit activists held a meeting at the mosque and announced they would collectively confront any communal attack.