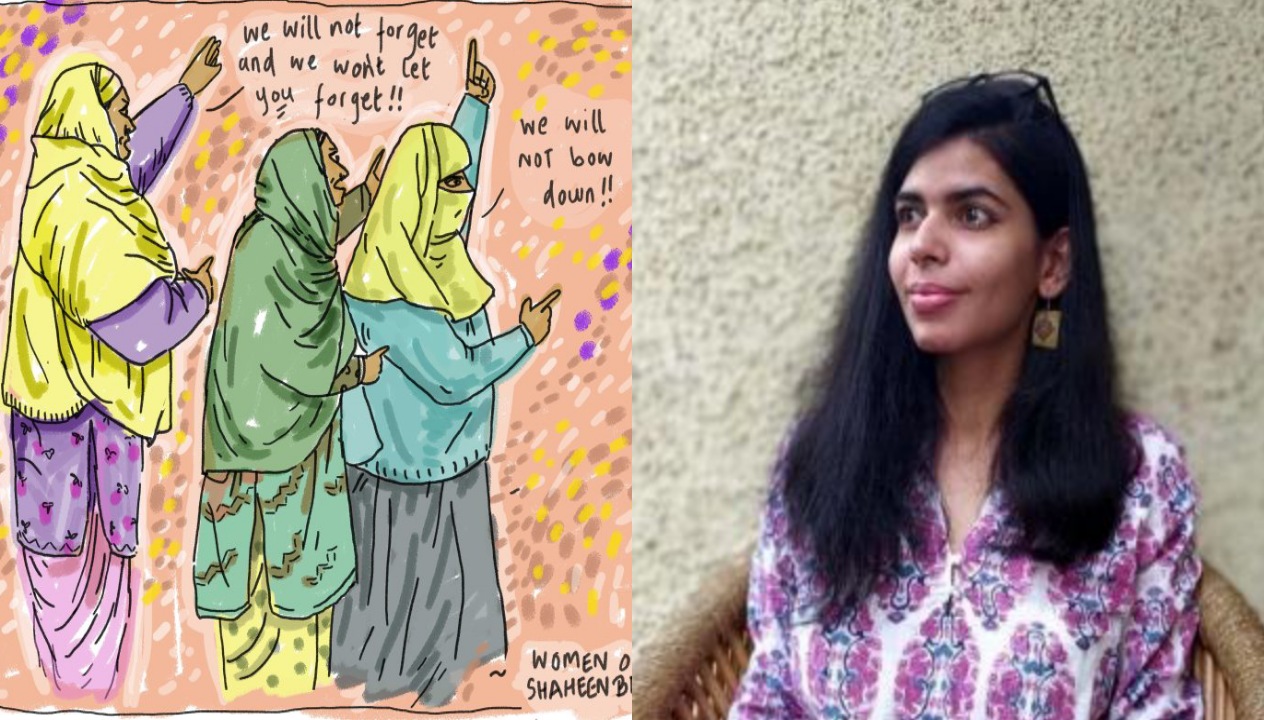 She remembers the initial days of the Shaheen Bagh protests — a few hundred women and their children braving the cold and raising their voice against CAA-NRC. At that point she just put out her sketches as posters at the protest site and social media. However, soon Ita Mehrotra felt that the voices from Shaheen Bagh needed to be heard by a much larger audience. The result is the graphic non-fiction ‘Shaheen Bagh: A Graphic Recollection’ published by Yoda Press.

A visual artist, arts researcher and educator, Mehrotra creates graphic narratives, non-fiction comics, illustrated text and animation, stemming often from engagements within socio-political shifts around her, and in unravelling their particular histories.

The artist noticed that as the CAA-NRC protests grew into a mass movement, there were thousands in attendance on particular days, but women remained the center of struggle, and that they were up on stage with slogans, speeches and poetry. “To have Muslim women take hold of this city and create a space for democratic dialogue like never before, and while doing so, to have public space that felt so safe for women even at the dead of night – this was a first and unlike any other protest,” she tells IANS.

Recalling that about two months into the protest continuing, by mid February 2020, she felt the need for a longer process of documenting to draw out what the protests meant to women who were deeply connected to it, how it began and where they saw it going, she says: “I was also having some of these conversations with a few people from Shaheen Bagh. And it was around this time that the publishers got in touch with me with the idea of compiling visual notes towards a book.”

Being at the protest sites, be it at Shaheen Bagh, Hauz Rani or Jama Masjid, and listening to women speak against not just the CAA but also lack of employment, demonitisation, police brutality and mob lynching – the artist remembers that the force of the speeches was so overwhelming that she had to do draw and put down notes.

“Because that is what I do. Once working on the book became a longer commitment, I had long conversations with a few of the women from Shaheen Bagh who were part of the protests from the very beginning. However, owing to the lockdown later, it was hard to go into the site at all – so I continued to have phone calls, relied on my notes, photographs by a friend who had been taking a lot of images of protests, and reports in newspapers etc.,” says the artist who is the Director of Artreach India.

A pass-out of St. Stephens’ College who completed her MPhil from JNU in the capital, she looks at the protest through the eyes of ï¿½Sahana’in the graphic non-fiction. “The protests were led by Muslim women first, not just in Shaheen Bagh, but across the country and this was important for me to establish. Also, Shahana was one of the women who I met early on and we connected instantly.”

Whose work has been part of Evidence Room, (KHOJ), Avaaz Do (SEHMAT) and Fummeto Comix Festival 2019, Luzern (prints of Drawing Home) stresses that she is not seeking things to inspire her art practice, but in fact it is the other way around. It is movements and struggles towards democratic rights, and the voices of women leaders, that she always navigates towards.

“The art making follows these engagements. Also, I am not trained in visual arts completely, but have a mixed background in social science, working with grassroots NGOs, community schools and in community art spaces.”

Adding that for her the ability of drawing, music, puppetry, theater, is to give voice to an imagination of realities as they should be, and also to sharply, and with wit, critique what is, is where she locates her artistic practice, Mehrotra says: “I want to be able to build conversations within the space of a graphic narrative, and then with the reader – between them and the pages, so that the book is not an object by itself, but is part of a much longer land arger process of thinking and exchanging ideas.”

The artist, who has also made posters of women leaders at the ongoing farmers’ protests and hopes to draw out longer versions of these in days to come is pleased that there has been an increase in the number of graphic books coming out in India.

“I feel there is quite a sharp increase in interest and recognition of the form in the past few years. Also, the fact that there’s still no long lineage of the form here, means that it’s very open to what we want to make of it – as comics makers and also for publishing houses, this means there’s a greater freedom to what the form will, in time, come to become here. I hope the larger publishing houses come to recognise how far this medium can go in engaging storytelling, but I’m also excited by the many independent publishing platforms and methods that artists are adopting – comics have always lent themselves to creating new structures around them and not fitting into old patterns,p” she says”.