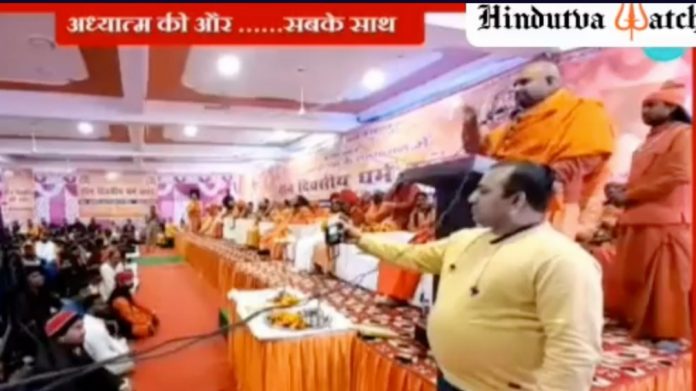 New Delhi:  A new public interest lawsuit was filed in the Supreme Court on Friday, asking the court to issue a writ of mandamus or any other writ, order, or direction to ensure that an independent, credible, and impartial investigation is conducted into incidents of hate speech against the Muslim community, including speeches delivered between December 17-19, 2021 at Haridwar and Delhi by a SIT or otherwise as the Court deems appropriate.

According to the appeal, speeches given between December 17 and 19, 2021 at two rallies in Haridwar (by one Yati Narsinghanand) and Delhi (by a group calling itself ‘Hindu Yuva Vahini’) are not only hate speeches, but an open call for the death of an entire community.

Justice Anjana Prakash, a former judge of Patna High Court and Qurban Ali, senior journalist approached Supreme Court under Article 32 of the Constitution of India to take the cognizance of both the events.

Counsel for the petitioners, advocates Rashmi Singh and Sumita Hazarika said in the petition that the hate speeches that have been delivered between in Haridwar and in Delhi with the apparent objective of declaring war against a significant section of the Indian Citizenry.

“These hate speeches consisted of open calls for genocide of Muslims in order to achieve ethnic cleansing. It is pertinent to note that the said speeches are not mere hate speeches but amount to an open call for murder of an entire community. The said speeches thus, pose a grave threat not just to the unity and integrity of our country but also endanger the lives of millions of Muslim citizens”, said the petition.

The petitioners also brought to notice of the court that the Police authorities have still not taken effective steps to arrest the accused.

“It is submitted that despite the passage of almost 3 weeks no effective steps have been taken by the Police authorities including non-application of Sections 120B, 121A and 153B of the Indian Penal Code, 1860 that squarely apply to the said hate speeches.”

It is further pointed out that the Police authorities have registered two FIRs against 10 people who took part in the Haridwar Dharam Sansad but even in the said FIRs only Sections 153A, 295A and 298 of the IPC have been made.

It is also relevant to note that no action whatsoever has been taken by the Delhi Police in relation with the event held in Delhi despite the fact that open calls for genocide, that are available on the internet, were made therein.

It may further be pointed out that the recent speeches are a part of a series of similar speeches that we have come across in the past.

The blatant inaction by the Police also came into the forefront when a Police Officer’s video went viral on the internet, wherein one of speakers of the aforementioned events openly acknowledged the officer’s allegiance with the organizers and speakers of the Dharam Sansad.

It is submitted that not only the inaction of the Police allow delivery of hate speeches with impunity but also shows that the Police authorities are in fact hand in glove with the perpetrators of communal hate.

Counsel for the petitioners warned the mass appeal and consequences thereof: “Plugging in into a systemic discourse of hateful content, declaration of war on a section of the population, and encouragement to participate in the ‘cleansing war’.

The speeches overtly and explicitly described Indian Muslims as usurpers of territory, and as predators of land, livelihoods and of Hindu women, thus creating paranoia and a completely manufactured feeling of being under siege amongst ordinary Hindu citizens. The discourse argues that Indian Muslim and Hindu citizens have competing interests, and for the latter to prosper and achieve cultural self-realization, the nature of the Indian Republic must be altered to that of a Hindu alone state. In its moderate form, the discourse advocates an active social and economic boycott of Muslims, and in some cases physical annihilation.

Open calls for genocide in direct violation of the Convention on the Prevention and Punishment of the Crime of Genocide:

The slogan “Shastramayva jayate” [Weapons alone triumph] was coined, which in the present context would translate into a call for genocide as per the definitions in the Convention on the Prevention and Punishment of the Crime of Genocide to which India is a signatory, Article I has been extracted below:

The Contracting Parties confirm that genocide, whether committed in time of peace or in time of war, is a crime under international law which they undertake to prevent and to punish.”

Breach of Duty of Care by the police and other public authorities.

“We may emphatically note that it is axiomatic that it is the duty of the State to ensure that the machinery of law and order functions efficiently and effectively in maintaining peace so as to preserve our quintessentially secular ethos and pluralistic social fabric in a democratic set-up governed by rule of law.

In times of chaos and anarchy, the State has to act positively and responsibly to safeguard and secure the constitutional promises to its citizens. The horrendous acts of mobocracy cannot be permitted to inundate the law of the land. Earnest action and concrete steps have to be taken to protect the citizens from the recurrent pattern of violence which cannot be allowed to become “the new normal”.”

In their prayer, the counsel pleaded to the court to issue a writ of mandamus or any other writ, order or direction to the Respondents directing them to comply with the guidelines laid down by this  Court in Tehseen Poonawalla v. Union of India (supra) specifically mentioned under Paragraph 40 thereof;

iii) Pass any other or further orders as this Hon’ble Court may deem fit and proper in the facts and circumstances of the present case.