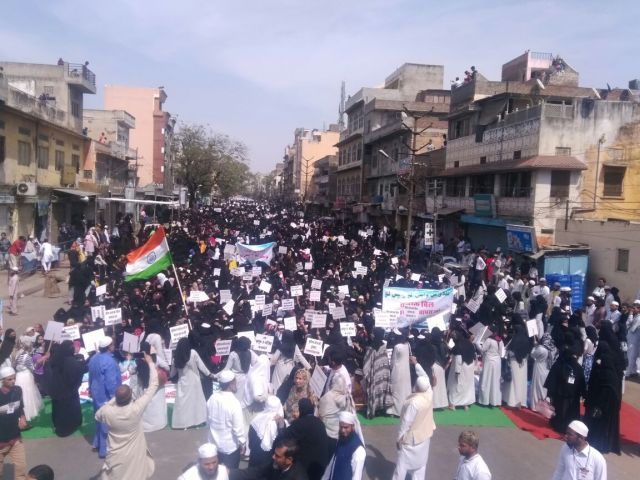 Jaipur: Rajasthan’s capital known as the pink city was on Wednesday virtually turned into “black” as a large throng of approximately 3 lakh women, mostly clad in hijab, stepped out of their houses in to join a silent protest march rejecting the controversial Triple Talaq Bill. Holding placards with various slogans and demands, they stated they did not want any interference in Sharia (Islamic law) by the government. Questioning the intention of the Modi government, they also said it is a “political “ploy” to divert attention from the government failure.

The historic march, billed as one of the biggest gathering so far of Muslim women in the country, raised strong voice against the ‘imposition’ of the proposed law saying this government even did not have the courtesy to even consult the Muslim women as well as the intelligentsia of the community.

In his address, Maulana Mohd Fazlurrahim Mujaddidi, secretary of All India Muslim Personal Law, said the sea of humanity( Muslim women) here is a clear and strong message to this government that women of Islam are totally against the bill which not only violates the fundamental rights but also a blatant interference in Muslim Personal Law.

The content of the bill is a violation of Article 14 and 15 of the Constitution and it is anti-social as it converts a civil matter to a criminal offence, Maulana Mujaddadi underlined.

In his speech, Maulana Mohd Umran Mahfooz Rahmani, AIMPLB, took the Prime Minister to the task for bringing the bill. “If he ( the PM) is pointing finger towards us, then why he has deserted his wife? He asked and adding that more than 22 lakh our Hindu sisters were deserted by their hubbies but the government is not concerned about them.

Board’s Women Wing president Dr Asma Zehra said Muslim women have been holding protest march across the country demanding rollback of the bill as they are happy with Sharia law.

Highlighting the problems of women in the country, she said the more than 15 million girls are killed in the wombs and 28,000 are burnt to death for dowry. The government is least concerned about the real issues and raked up the triple talaq issue unnecessarily which is not an issue for Muslim women, she said. 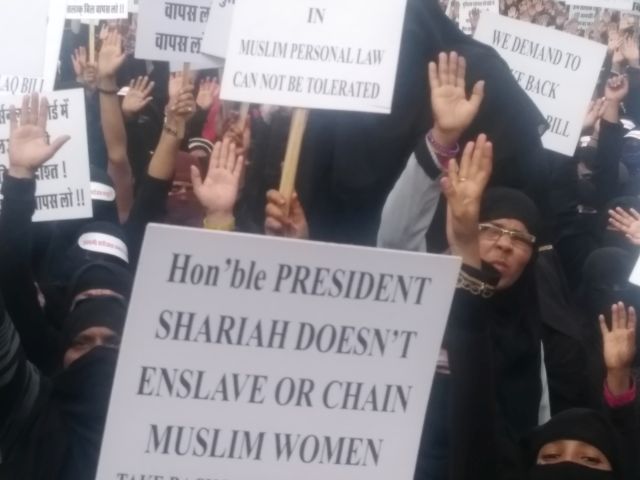 The government has been diverting attention by raking up non-issues because it failed on all fronts and promises made to the people of this country for coming to power, Dr Zehra pointed.

“The bill is being presented as a historic one that will empower women. How is it empowerment if homes are destroyed and women are left to beg on the streets?” She asked.

Echoing her views, Fatima Muzaffar of Muslim Mahila Research Kendra said the present government should not take the Muslim women for granted. The PM claimed that the bill will bring the happiness on the face of Muslim women but it is nothing but a big lie, she said.

Board member Yasmeen Farooqi said by coming on the streets in huge numbers against the bill in several parts of the country, Muslim women have smashed the government’s claim that it wants to ‘liberate’ Muslim women.

She also criticized the President of India’s mention of Muslim women in his addressed to the Joint session of the Parliament.

“ I do not want to use harsh words against the President as he is the most hononrable man of the country, but I want to say him that Islamic Sharia does not enslave or chain Muslim women as anybody see the huge gathering of women”, she thundered.

Speaker after speaker warned the government should commit the folly of considering the Muslim women as weak as “ Islam emancipated them 1400 years long ago.

“Not has the Government forbidden the act of triple divorce and made it is punishable act through this Bill; it has been drafted with the aim of depriving Muslim husband and Muslim Women of his/her rights to the divorce and Khula. The drafted in such a way that it is not only banning Triple Talaq but against the all types of Talaq or Talaq System as a whole”.

The protest march set off from Chardarwaza via Ghat Gate, Nawab Ka Chauraha, Moti Dogri Road and finally converged at the meeting point in Muslim Musafer Khana area of the city. A resolution was passed with unanimously asking the government “to desist from interfering Muslim Personal Law and roll back the bill.”

Not has the Government forbidden the act of triple divorce and made it is punishable act through this Bill; it has been drafted with the aim of depriving Muslim husband and Muslim Women of his/her rights to the divorce and Khula. The drafted in such a way that it is not only banning Triple Talaq but against the all types of Talaq or Talaq System as a whole. 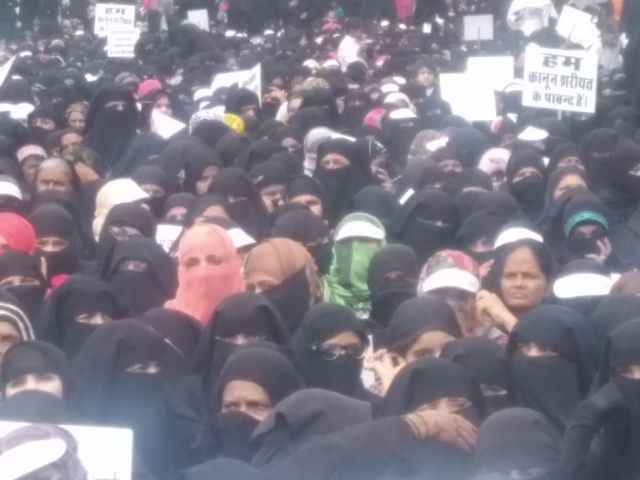 If you feel to be loaded

• In the section “Definitions”, divorce is defined as: “Talaq Biddat or any identical form of Talaq through which husband may pronounce immediate and irrevocable divorce.

• It is common knowledge for any student of Shariah that the above Definition forbids even Talaq bain as a cognizable act. For there is no room for revocation in this form of divorce and it is with immediate effect. So even the divorce arising out of Khula which is forbidden according to this Bill. Its consequence will be that the wife who is keen on securing separation from her husband will be forced into live with her husband, without her will.

• In its judgment Supreme Court recognized all forms of divorce other than Triple Divorce as an essential part of Islam and Muslim Personal law and ruled out any change in these.

• The Government introduced this Bill in Parliament which aims at demolishing the whole institution of Talaq. For misleading public, however, the Government strongly carried out the propaganda that its intention was to forbid only Triple divorce.

Contradiction in the Proposed Bill:

• This bill is marred by strange contradiction. For example, according to this law, divorce will not come into effect yet husband will be liable to penalty and 3 years imprisonment.

• This law takes away the right of child’s custody from husband and grants this responsibility to wife. At the same time, husband will bear the maintenance of wife and children. On the one hand, it insists that divorce does not come into effect and the marital tie remains intact, yet its consequences indicate the dissolution of the tie and the separation between husband and wife. For when a couple leads normal life, the need for a separate law for the custody of children and maintenance of husband and wife does not wise.

• A major flaw in this law is that it vests women with the right of custody and bringing up of children. However, the prevalent Guardianship and ward, Act places premium on child’s interest. Husband or wife who can protect child’s interest better will have custody.

• Another serious flaw in the law is that it deems the act of divorces as a non – bailable and cognizable crime. Police may arrest a husband even without a court warrant. Worse, police may initiate this action not only on wife’s complaint, but also on anyone’s complaints, even though even his wife keep denying that no divorce ever took place