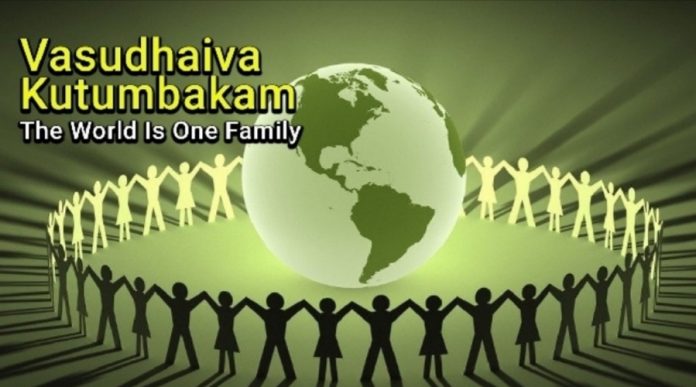 The phrase ‘Vasudhaiva Kutumbukum’ is a part of the ancient Hindu texts called Upanishads. It means the World is one family. Hindus often cite this phrase to highlight the pluralistic ethos of Hinduism, engraved on the entrance lobby to the Parliament of India.

Vasudhaiva Kutumbukum, in a broader sense, means that the whole World is one, and every part of the World and people are interconnected. A Tamil poem written 2500 years ago explains it beautifully, “Yathum Oore Yavarum Keller” Every place is my home town; Everyone my kith and kin.

We approached Dr. Mike Ghouse, the founder of the Center for Pluralism, to explain the above statement and its connection with Pluralism. He says, “I feel at home everywhere and am comfortable with everyone. He explains that my differences dissolve when I consider everyone part of the web I am in, and a new place is an extension of the place where I was born. Since I have learned to respect the otherness of the other, I am comfortable with everyone.”

Swami Vivekananda expresses his wisdom: “All differences in this world are of degree, and not of a kind because oneness is the secret of everything.”

Indeed, everything in the universe originated from a single act, a single source. If we trace back our origins, we all stemmed from one single couple.

The Quran 49:13, Human beings, we created you all from a male and a female and made you into nations and tribes so that you may know one another. The best among you is the one who cares for their fellow humans. The causer of the universe has created everything interconnected, interdependent, and in harmony. All he wants is for us to sustain that harmony so we can live without apprehensions.

“In the Indian context, pluralism is the realization and practice of living with diversity in day-to-day life – in culture, society, our political and economic atmosphere.” A society where people with different cultural backgrounds keep their tradition.” Google

Akbar, the great King of India, a pluralist to the core, started bringing Hindus, Muslims, Sikhs, Jains, Jews, Christians, and others for weekly discussions; he believed the essence of all religions is similar though the rituals were different. He called this syncretic knowledge “Din-e-Elahi,” roughly translated as God’s way of life. He was, however, accused of mixing and matching religions.

Ghouse proudly shares that India’s syncretism is one of the best examples of Pluralism. Some of the most popular Hindu devotional songs were written and sung by Muslims and vice-versa. The Hindus, Muslims, Christians, Sikhs, Jains, Buddhists, Jews, and others did not have religious filters for friendship; they celebrated each other’s festivals and ate at each other’s homes. Invariably, Muslims care about what they cook for their Hindus and other friends, as most Hindus are vegetarians.

The shameful part of India’s Pluralism is the mistreatment of the Dalits; even though the Indian Constitution gives equal rights to every Indian, it has not filtered down to the society on a large scale. I hope it changes; Dalits are considered the lowest human beings in the caste hierarchy.

India is going through a very difficult phase now and pluralism is looked upon as a curse word by a few. Lord Krishna had promised that whenever the society becomes chaotic, he will emerge from among the people and restore righteousness. We pray he is right.

Mufti Fazal Hamdard is an interfaith activist based in Karachi.

Mukherjee has shown mirror of truth to RSS: Congress