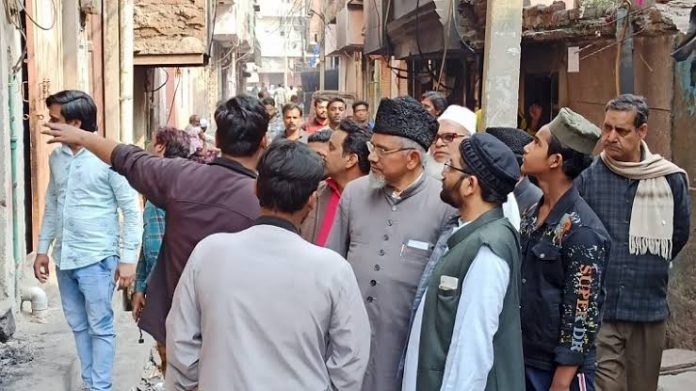 New Delhi: Jamaat-e-Islami Hind (JIH), the largest religo-socio group of the Indian Muslims, on Saturday described the response of the Prime Minister Narendra Modi and Delhi Chief Minister Arvind Kejriwal to the February anti-Muslim pogrom in North East Delhi as very “shameful” and “shocking” which claimed more than 53 lives so far and 200 injured. Seeking a high-level probe of the targeted violence under the supervision of the Delhi Minorities Commission, Jamaat leadership said the SIT set up by the Delhi police would not serve any purpose as the police force has been accused of ‘participating and siding” with the rioters during violence.

Addressing Jamaat’s monthly press briefing at its headquarters, Syed Sadatullah Hussaini, President of the organization, said the pattern of Delhi violence clearly point to that it was preplanned in which lives, businesses and properties of Muslims were specifically targeted.

“The quantum, method of execution and ferocity of the attacks on the localities indicate a meticulous planning, weapons training given to attackers with a specific objective of targeting the Muslim community, their businesses, properties and places of worship.”

When this correspondent drew his attention to the fact that the PM, and the HM as well the Delhi CM neither visited the violence-hit areas nor condemned the death, Jamaat chief quipped that it is really very “shocking and shameful” that large-scale violence was orchestrated and over 50 people were killed and thousands rendered homeless just a few kilometers away from Prime Minister’s office and residence but these leaders did not make any visit to the affected areas.

“Over 50 people have been killed and hundreds injured and hundreds of homes, shops were looted and torched and thousands of people became homeless. This all happened just a few kilometers from the PMO. It is very shocking and shameful that Prime Minister and Chief Minister are not yet visiting the affected people. This is the minimum humanitarian level that is expected from the government functionaries.”

It is to be noted that two weeks have been passed since the violence broke out in this tiny part of the National Capital, but neither the PM and nor anyone of his cabinet colleague do not deem it fit to condemn the violence and condole the deaths. The PM even did not announce any relief package from the Prime Minister’s Fund. Three days after the violence, the PM had posted a tweet urging people “to maintain peace and brotherhood.”

In response to another question of this correspondent regarding the motives behind violence, he said it was to suppress voices being raised against government and to polarize the society on communal lines for electoral gains.

He said Jamaat sought a high-level probe by the Delhi Minorities Commission North East Delhi because there were several allegations about passive or active involvement of police personnel also in the three-day long violence, and therefore only SIT probe was not sufficient.

On being asked about whom was behind the riots, the JIH chief said: “It is the job of the police to find who was behind the violence but everyone knows who is peddling the ideology of hate and polarizing society. The provocative speeches by some politicians sparked the violence. But the role of the police as can be seen in various videos and reports has been very disturbing.”

On being asked if the Shaheen Bagh protests should be discontinued as it has led to violence, the Jamaat president warned that it was very dangerous and condemnable to link protests with violence.

“Dissent, disagreement and peaceful protests are a sign of a healthy democracy and linking it with violence is not correct. Managing the protests is the job of law enforcement agencies but the violence that was perpetrated in North East Delhi is highly detestable and a much bigger issue.”

Regarding Shaheen Bagh protest which is now entered in third month, he said the court has seized of the matter so one should not comment on its legality.

“However, we feel that it was the duty of the government to engage with the protestors, talk to them. No government representative was sent. We request the media to focus on the violence and not link it to protests.”

On the question of upcoming NPR, he said, “NPR is linked to NRC which is highly divisive for the country. Hence we urge people to avoid participating in the NPR exercise.”

He also condemned the ban on two Malayalam Channels ‘Media-One and Asianet’.

“The government failed to act on channels that spout hate but banned those who reported without fear and favor. It shows that the government wants to control the media narrative and it is a dangerous trend that must be resisted,” he added.

Earlier the Vice President of Jamaat, Muhammad Salim Engineer briefed about the riots and the relief and rehabilitation work being carried out by the Jamaat.

“Jamaat is also helping in the work of registering FIRs and legal prosecution. The cadres of Jamaat and its associated organizations have a team of dedicated volunteers including women and girls who are playing an active role in all our efforts,” he added.

He said that what has had happened in the northeast Delhi “cannot be called clashes between two groups or communal riots. It was a planned attack and rioters were trained.”

The violence broke out after pro- and anti-CAA protesters clashed in several areas of this party of the city on Feb 23 afternoon, hours after BJP leader Kapil Mishra’s threatening ultimatum to police to clear the roads of the anti-CAA protest. But for the next full two days large-scale violence, arsons, and looting took place about one dozen localities.

Jamaat Islami leadership made several demands including Rs 1000 crores relief package from the PM, and an amount of Rs 100 crores ex-gratia for the relief camps.

1. An enquiry under the Delhi Minorities Commission should be completed within one month.

3. The PM should visit the relief camps.

5. The Delhi Police made public list of detained and arrested people.

7. The Delhi Police must arrest all those accused of murder/ torching to death of innocent citizens within 100days.