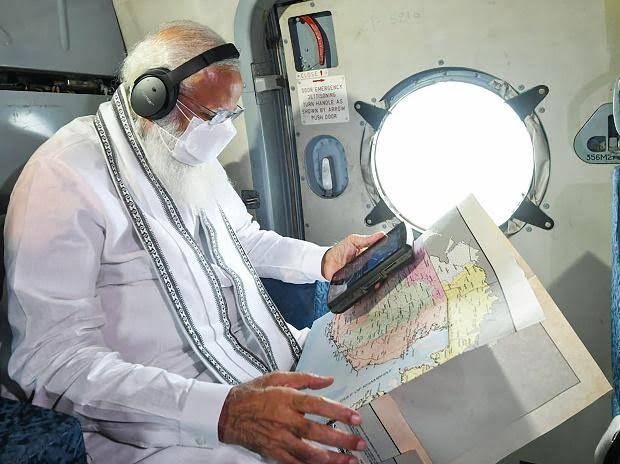 Prime Minister Narendra Modi, who conducted an aerial survey of the Cyclone Tauktae affected areas in Gujarat on Wednesday, announced a financial assistance of Rs 1,000 crore for immediate relief measures in the state. He also announced Rs 2 lakh ex-gratia for next of kin of those who lost their lives and Rs 50,000 for those injured due to Cyclone Tauktae across India. The prime minister has said immediate financial assistance would be given to all affected states after they send their assessments to the Centre.

The Centre will deploy an inter-ministerial team to visit the state in order to assess the extent of damage in the state and has assured the Rupani government of aid for restoration of damaged infrastructure.

PM Modi on Wednesday took stock of areas that were affected by cyclone Tauktae in Gujarat and Diu in an aerial survey, including areas like Una, Diu, Jafarabad, and Mahuva. He will also hold a review meeting today in Ahmedabad.

Reviewed the situation caused by Cyclone Tauktae during a meeting in Ahmedabad. Took stock of the evacuation efforts and the ongoing relief work for those affected. Centre will help in rebuilding damaged infrastructure. https://t.co/B0yi2JJau5

Prime Minister Narendra Modi on Wednesday reached Bhavnagar in Gujarat to review the situation in the state in the aftermath of cyclone Tauktae. PM Modi landed at Bhavnagar from Delhi and proceeded for an aerial survey of Una, Diu, Jafarabad and Mahuva, an official said. He was received by Gujarat chief minister Vijay Rupani at the airport.
Undertook an aerial survey over parts of Gujarat and Diu to assess the situation in the wake of Cyclone Tauktae. Central Government is working closely with all the states affected by the cyclone,” PM Modi said in a tweet on Wednesday.

Undertook an aerial survey over parts of Gujarat and Diu to assess the situation in the wake of Cyclone Tauktae. Central Government is working closely with all the states affected by the cyclone. pic.twitter.com/wGgM6sl8Ln

PM Modi is also scheduled to visit Diu today to review damage caused by the cyclone. Thirteen people were killed in Gujarat as cyclone Tauktae pummelled parts of the state and left behind a trail of destruction along the coast, uprooting electric poles, trees and damaging thousands of houses and roads.

In what was one of the worst cyclones faced by the state, Tauktae triggered heavy rains in many parts along its way from the Saurashtra coast to North Gujarat with 46 talukas receiving over 100 mm of downpour, while 12 of them recorded 150 mm to 175 mm of rains.
Tauktae, characterised as an extremely severe cyclonic storm on Monday, has now weakened into a depression and lay centred over south Rajasthan and adjoining Gujarat region on Wednesday morning, the India Meteorological Department said.
Over 16,000 houses were damaged, more than 40,000 trees and over 70,000 electric poles uprooted, while 5,951 villages faced total power blackout due to the cyclonic storm in Gujarat, Chief Minister Vijay Rupani said -IANS