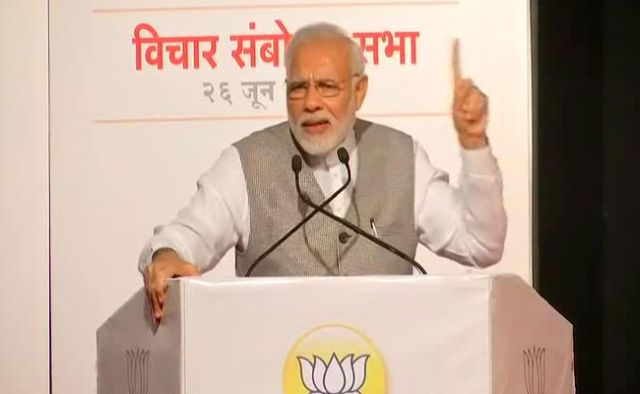 Mumbai : Prime Minister Narendra Modi said on Tuesday said the 1975-77 Emergency was a “dark period” that the nation could never forget and called for making democracy stronger by “writing, debating, deliberating, and questioning” its vital aspects and pledged his full commitment to protecting the Indian Constitution and Democracy.

Simultaneously, he took the opportunity attack the Congress Party and its leaders – taking care not to name any members of the Gandhi-Nehru family – saying the Bharatiya Janata Party (BJP) was not observing a ‘Black Day’ merely to criticise the Congress, but to make the modern youth aware of what happened during Emergency.

“India remembers its as a dark period when every institution was subverted and an atmosphere of fear was created. Not only people but also ideas and artistic freedom were held hostage to power politics. The youth have no idea what happened then and they cannot imagine how living without freedom can be,” Modi said.

Interestingly, Modi’s comments came in Mumbai where the Indian National Congress (INC) was founded on December 28, 1885, 132 years ago by a group of nationalists to launch the country’s freedom struggle against the British Empire.

It also came a day after union minister Arun Jaitley called the then Prime Minister, the late Indira Gandhi as ‘Hitler’ – and in Mumbai, where BJP ally and Shiv Sena’s ex-Mayor Snehal Ambekar had compared Modi with the German dictator, leading to a massive political furore exactly three years ago.

Addressing a meeting at the Birla Matoshri Autitorium, Modi hailed the spirit of those citizens who firmly opposed the Emergency that came into force on June 25, 1975, leading to suspension of the fundamental rights.

“Whenever the Congress – and especially this one family – apprehends losing power, they start shouting and raise the bogey that the country and democracy are in danger and there is an atmosophere of fear, and they alone can save it,” Modi said.

He accused the (Gandhi) family of breaking the INC – built by the efforts of Mahatma Gandhi and other leaders – “in their lust for power”, and how it subverted all democratic institutions including the Constitution, the parliament, the elections, the judiciary and the media, “for the benefit of one family”.

Modi said they did everything but cleverly remained within the limits of the Constitution, but years later the family never imagined that the courts would frame corruption charges against them and they would be enlarged on bail.

“So, now they tried to scare the highest echelons of the judiciary by bringing in an impeachment motion during Emergency, judges were abruptly transferreda and their arrogant mentality remains unchanged even today,” Modi said.

Besides, canards were spread against the RSS and Jan Sangh (which later became the BJP), that they are anti-Muslims and anti-Dalit and they would butcher them, all for the lust for power of the family.

“I salute the courage of all those great women and men who steadfastly resisted the Emergency, which was imposed 43 years ago. Their struggles ensured people power prevailed over authoritarianism and the stifling of civil liberties. Media persons like the late Ramnath Goenka and the late C.R. Irani, and senior journalist Kuldip Nayar braved all odds and censorship to continue fighting for democracy, Modi said.

“In the past all parties had respected the Election Commission of India (ECI), baring one party, which has now been reduced from 400 to 44 (seats in Lok Sabha). So now they target the ECI, they attack the Electronic Voting Machinesa” Modi pointed out.

He said those who “crushed the Constitution and imprisoned Democracy cannot be trusted, but they are now alleging that “Modi will destroy the Constitution,” but assured that “we are different.

“Despite ruling for 70 years, you never celebrated the Constitutiona We started it in Parliament and right upto the school levels. We want to strengthen it even more,” the PM said.

“Let us always work to make our democratic ethos stronger. Writing, debating, deliberating, questioning are vital aspects of our democracy which we are proud of. No force can ever trample the basic tenets of our Constitution. We must remain aever vigilant’ in coming times,” he urged.

The Emergency lasted till March 21, 1977. The Congress led by Indira Gandhi then was voted out of power in the elections that were held soon after.