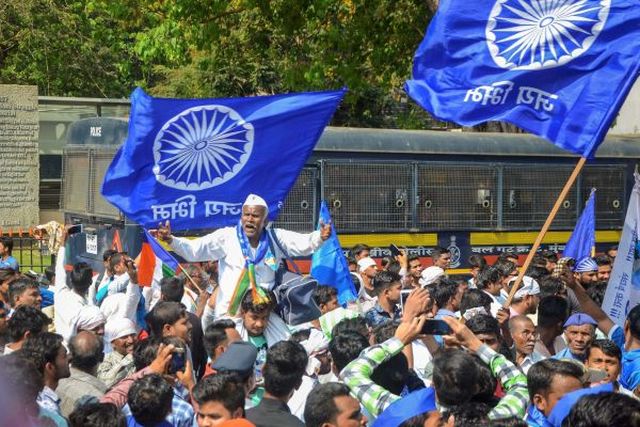 Addressing a huge gathering of Dalits and other parties’ activists who took part in the ‘Yalgar Morcha’ here this evening, Ambedkar – the grandson of the Architect of Indian Constitution B. R. Ambedkar – without mincing words, said “it is a well-known fact that Modi considers Bhide as his Guru.”

“We are not interested in fighting with Modi. However, if action is not initiated against Bhide by Maharashtra government, then we know how to deal with it at the appropriate time,” he warned.

Attacking the PM, Ambedkar compared him with Adolf Hitler who he said never listened to anybody.

“Hitler heeded nobody. He functioned according to his whims and ultimately committed suicide. Even Modi conducts himself like Hitler, treats all his cabinet colleagues as prisoners,” he said.

Ambedkar made it clear that everybody will have to bow before the wishes of the people and “we know how to make the Prime Minister or the Chief Minister (Devendra Fadnavis) bend before the masses, or we will expose them”.

“If the law is not implemented, and Bhide is not arrested within eight days, we shall chalk out our future strategy. Why should the law not be equal for everybody? If (another Hindutva leader) Milind Ekbote can be arrested, what has prevented Bhide’s arrest since he is the prima accused in the Bhima-Koregaon incidents,” he said.

Earlier, he led a delegation to Fadnavis reiterating his nearly three-month old demand for the arrest of Bhide.

“The CM says the state government cannot arrest him due to lack of evidence. I would like to inform him that there is ample proof against Bhide,” Ambedkar countered.

Ambedkar has also sought the arrest of Maharashtra BJP chief Raosaheb Patil-Danve for his social media comments on the Bhima-Koregaon caste riots.

In a retaliatory development, Bhide’s supporting groups plan to take out processions all over Maharashtra including Mumbai on Wednesday (March 28) to oppose the campaign against him by Dalit groups.

On March 19, the Shri Shiv Pratishthan leader had demanded their arrests, alleging they had “incited people to indulge in violence and rioting” at their public meeting in Pune on December 31.

In the ongoing season of protests, Mumbai witnessed another huge congregation of Dalits and other parties, spearheaded by BBM which paralysed parts of south Mumbai, to seek Bhide’s arrests for his role in the January 1 caste riots in Bhima-Koregaon.

Monday’s protest was the second major one to hit Mumbai after the Long March from Nashik by over 35,000 farmers and tribals to the city on March 12.