New Delhi : The National Confederation of Human Rights Organization (NCHRO) visited  the family of Mohammad Ramzan , who died in suspicious circumstances in police custody. Mohammad Ramzan who lived in Mangrol town of Baran district, had died in Kota  hospital because he was brutally beaten by the police.

“Rajasthan police is trying to prove it as he died because of illness. While the truth is that he has died because he was assaulted physically, ” reads a press note released by NCHRO.

Ramzan was booked in 1987 u/s 307 after some time he got bail from trail court. After that he got bail again from high court. He had been in jail for the last 9 months. During this, he fell ill and his family had to visit both hospital and jail several times.

Adv. Ansar Indori, National Executive member of NCHRO while addressing the press conference said that in December a bail application was also filed before SC, for which Ramzan’s son Mohammad Rizwan had requested the organization in written form and was always in touch with the organization for his father’s bail.

Rizwan told that his father had once got parole, after which a file was sent to administration and the governor to free him from the sentence through the district collector. Rizwan said that a few days ago when his father fell ill, he was admitted to the prisoners ward of medical college in Kota. 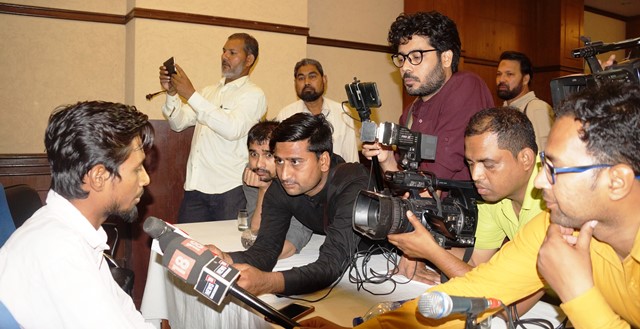 “When my mother, brother and I went to see him, on duty policemen misbehaved with us and didn’t allow us to meet my father. They also asked for a bribe of 500 rupees for allowing us. We refused to give them the money and complained to the hospital administration for it. Just because of this, the police in drunken condition hung my father by his feet with a chain and brutally beat him up with pipes. Whereby his condition became worse and was referred to Jaipur SMS on the very next day. When he felt better in Jaipur, he told everything to the family,” Rizwan said.

Ramzan had stated in a video clip before his death that the police had warned him not to tell anyone about what happened to him. conference disgraced for wearing cap and having beard. After two day he was discharged by the police, without any information to the family. Ramzan was secretly taken to Kota from Jaipur. When his condition became worst, he was again admitted to Kota medical hospital, where he died on 26 April night.

Rajasthan police is trying to prove it as he died because of illness. While the truth is that he has died because he was assaulted physically.