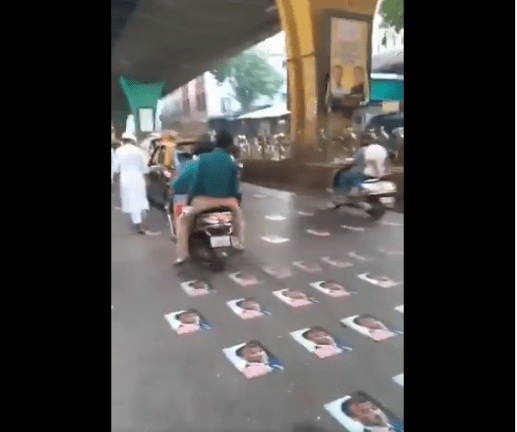 Mumbai :  Minutes after posters of French President Emmanuel Macron were found pasted on the Mohammed Ali Road, Mumbai Police stepped in and removed them, officials said here on Friday.

The posters, put up by some unknown persons, were noticed on Friday afternoon after videos made by passersby showing people walking and vehicles driving over them went viral on social media.

While a team from the Pydhonie police station swooped in and removed the posters, no case has been lodged in the incident even as the police were busy with the Eid Milad-un-Nabi procession on Friday afternoon.

French President Macron has been under criticism from Muslims worldwide following his remarks in the wake of the recent row in his country over the Prophet’s caricature and other incidents in his country.

Macron has been under fire for defending the publication of caricatures depicting Prophet Muhammad on free speech grounds, sparking angry protests across the Muslim world and campaigns to boycott French products.

Meanwhile, BJP legislator Atul Bhatkalkar has demanded stringent action by Chief Minister Uddhav Thackeray against those responsible for sticking posters of the French President, who has stood by India solidly vis-a-vis China in recent times.