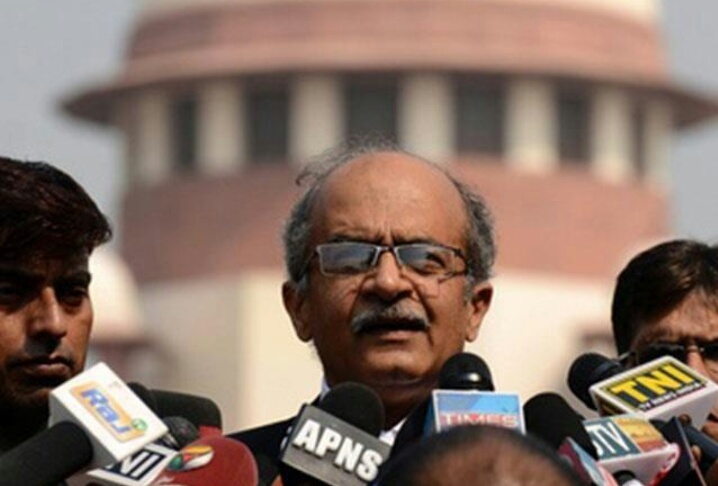 New Delhi:  Political and rights groups,  and noted lawyers  on Monday came out in support of senior advocate of Supreme Court and  rights defender  Prashant Bhushan who was held guilty of contempt of court by the supreme court for his two tweets. They urged the Court to reconsider the verdict and refrain from pronouncing any punishment in the case. Noting the contempt judgment with dismay, they said it is “a sign of the current deterioration in the state of free speech in the country.”

The Communist Party of India (Marxist) said the verdict of the three-member bench of the Supreme Court holding senior lawyer Prashant Bhushan guilty of contempt of court is “unfortunate and uncalled for”.

The CPI (M) is the first major national party came out in support of the activist and said “the Court has displayed intolerance to criticism and an illiberal attitude which does not behave the highest court of the land”.

Referring to prevailing intolerance and repression in the country since the advent of BJP at the center, the party warned that the verdict would only reinforce this.

“The verdict will only reinforce the prevailing atmosphere of intolerance and repression where the executive is using draconian laws such as the sedition clause to suppress dissent and journalistic freedom.”

“The Court verdict slamming Bhushan’s critical tweets of it is “a sign of the current deterioration in the state of free speech in the country.”

CHRI’s Executive Board noted that   “On India’s 74th Independence Day, discretion, restraint, firm dignity and the unequivocal upholding of rights is what Indians look to from the highest court of the land, not the silencing of expression.”

They said by passing this judgment the court sent a chilling message about the cost of criticism.

However uncharitable or inappropriate the tweets might be, the Court “in passing the judgment, has made it clear that ‘the majesty of the law and of the administration of justice’ is above the fundamental freedom of expression sending a chilling message about the cost of criticism.”

They further pointed out that the court did not hear   other important matters related to public causes but found time to declare Bhushan guilty.

“Public confidence in the judiciary is built by securing the rights of people and not by using the law of contempt during a pandemic when the court’s functioning is anyway restricted, when other important matters are not heard, and holding a human rights defender like Prashant Bhushan guilty for exercising his freedom of expression.,”

They said CHRI supported calls by different sections of society, including the media, academia, civil society organizations and lawyers, groups demanding the repeal of existing criminal defamation and contempt laws, citing this as part of a colonial legacy when dissent was criminalised.

Besides lawyers association, over 40 prominent members of the bar also came out in support of Bhushan saying that the content of Bhushan’s tweets did not amount to contempt of court and it was neither intended to. The bar members  such as its  chairman  Dushyant Dave ,Sanjay R Hegde, Raju Ramachandran, Huzefa Ahmadi and Varinda Grover,  have issued a joint statement to express their disappointment over the judgment and solidarity with Bhushan.

The distinguished advocates   emphasized that, “An independent judiciary does not mean that judges are immune from scrutiny and comment.”

It is the duty of lawyers to freely bring any shortcomings to the notice of bar, bench and the public at large, they added.

“While some of us may have divergent views on the advisability and content of Mr. Prashant Bhushan’s two tweets, we are unanimously of the view that no contempt of court was intended or committed especially when contrasted with the normal standard that “Justice is not a cloistered virtue… She must be allowed to suffer the scrutiny and respect, even though outspoken comments of ordinary men.”

They said Bhushan as a lawyer of good standing of the Supreme Court, may not be an ordinary man, his tweets do not say anything out of the ordinary, other than what is routinely expressed about the court’s working in recent years by many on public fora and on social media. Even some retired judges of the Supreme Court have expressed somewhat similar views.

They warned that a bar silenced under the threat of contempt, will undermine the independence and ultimately the strength of the Court.

“This judgment does not restore the authority of the court in the eyes of the public. Rather, it will discourage lawyers from being outspoken. From the days of the supersession of judges and the events thereafter, it has been the Bar that has been the first to stand in defence of the independence of the judiciary.  A bar silenced under the threat of contempt, will undermine the independence and ultimately the strength of the Court. A silenced bar, cannot lead to a strong court.”

“We also express a deep sense of disappointment about the Supreme Court’s utter disregard of the presence of the Learned Attorney General, a highly respected Lawyer of great eminence, and its refusal to seek his valuable opinion in the matter, which is mandated even as per contempt law,” they said in the statement.

They urged the court that the judgment must not be given effect to, until a larger bench, sitting in open court after the pandemic has the opportunity to review the standards of criminal contempt.

“We do believe that the Supreme Court will hear the Voice of the People expressed all around in last 72 hours on the subject and take corrective steps to prevent miscarriage of Justice and restore the confidence and respect that Citizens have generally reposed in it,” read the statement.

CPI (M) also said   that it is of the opinion that it would be better for the Court to reconsider the verdict and refrain from pronouncing any punishment in the case.