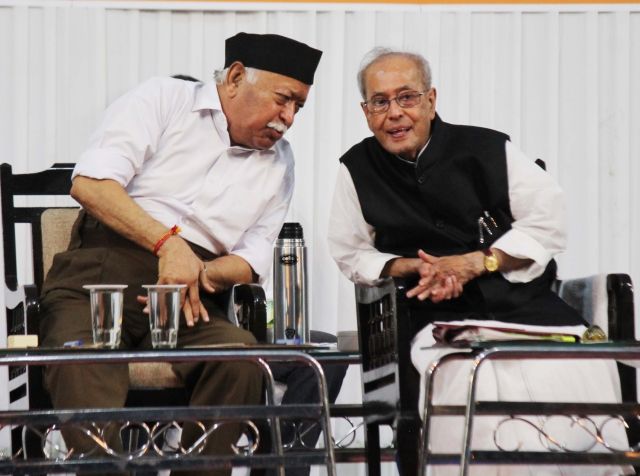 The images from Nagpur were, in the words of a Congressman, hard to digest. Here was Pranab Mukherjee, a dyed-in-the-wool secularist, who had spent a lifetime in the Congress party, then became the President of India with the responsibility of upholding its Constitution, sharing the platform with, and enjoying the hospitality of, a person — and the organisation he heads, the Rashtriya Swayamsevak Sangh (RSS) — espousing values and ideals that are the very antithesis of all he stood and strove for his entire life.

“You were part of the government that banned the RSS in 1975 and again in 1992. Don’t you think you should tell us what was evil about RSS then that it has become virtuous now?” asked a middle-level Congress leader of Mukherjee after his controversy-tinged visit to the headquarters of the Hindu-first outfit that is the ideological mentor of the ruling Bharatiya Janata Party (BJP) of Prime Minister Narendra Modi.

Many in the Congress party, including his own daughter, questioned the wisdom of the former head of state and elder statesman accepting an invitation from the organisation that has been a bete noire to the left-liberal-secular establishment. Not just the committed, but even concerned citizens, have been voicing their anguish at the creeping climate of hate and prejudice in the country and blamed the ideology of the RSS and its affiliated Sangh Parivar outfits for the systemic attacks on minorities and suppression of the voice of socially oppressed groups. Many have voiced fears that if such venom was allowed to spread, it might end up tearing up the multireligious, multiethnic and multicultural social fabric of India that makes the country so unique.

“Today we are confronted with a politics of hate that has swept large parts of our country….. Muslims live in fear of the shape of the next round of attacks, even as the rights of Dalits and Adivasis enshrined in the Constitution are being questioned,” read the flier distributed at the #NotInMyName protests across the country in April after the brutal violations of young girls, allegedly by elements with affiliations to Hindu nationalist groups.

In this atmosphere of growing polarisation stepped in the 83-year-old Mukherjee, bearding the lion in his own den as it were, ignoring appeals by some old cabinet and party colleagues. In a speech that was followed nationally on live television, Mukherjee said that the “soul of India resides in pluralism and tolerance” and “secularism and inclusion are a matter of faith for us”. He reminded the RSS rank and file who preached a Hindu supremacist ideology and whose founder considered Muslims and Christians as “invaders” that “the multiplicity of culture, faith and language is what makes India special” and “any attempt at defining our nationhood in terms of dogmas and identities of religion, region, hatred and intolerance will only lead to dilution of national identity”.

Was Mukherjee wrong in going to Nagpur, in breach of the beliefs and values he is known to have held dear all through his half-a-century-long political career? A peek into his thinking was available in his address in which he expressed anguish over how “manifestations of rage” were tearing apart the national fabric. He said a “dialogue is necessary not only to balance the competing interests but also to reconcile them… only through a dialogue can we develop the understanding to solve complex problems without an unhealthy strife within our polity”.

Dialogue and accommodation are the cornerstones of democratic functioning and their absence have often sounded the death knell of democracy. In the celebrated book “How Democracies Die”, Harvard professors Steven Levitsky and Daniel Ziblatt talk about how “extreme partisan division” in American democracy today — following the norm-breaking tenure of President Donald Trump — was being fuelled not just by policy differences between the Republicans and Democrats “but by deeper sources of resentment, including racial and religious differences” and was eroding the “guardrails of democracy”.

India today stands similarly at a crossroads, unprecedented perhaps in its 71-year history. As the national discourse becomes heated by the day, with a permissive social media often fanning the division and hatred between the two extreme partisan ideologies, the growing slugfest and the low level of the debate is leading to a gradual disillusionment with democracy among ordinary citizens, particularly the youth, who yearn for change and progress.

With the country headed towards what could be one of the bitterest elections in recent history, not only between sworn political rivals but between ideologies that are fundamentally at odds with each other in their national outlook and their very definition of who is an Indian, the partisan polemics over every issue and policy of national concern is eroding India’s fundamental unity. If India, an exemplar of democracy, were to fragment on religious or caste lines, analysts say it could have a devastating effect on the region and the rest of the world.

And that is perhaps why Mukherjee felt he had to step in to bridge the deepening chasm in the national discourse and plead for dialogue. Whether the canny former politician did it with any eye on the next elections — in politics, as Franklin Roosevelt said, nothing happens by accident — may not be known immediately, but to denounce his visit as self-serving and a betrayal is to lose sight of the fundamental tenets of democracy which the world has come to value in India.

“Messy as it may be, India’s political system may be credited with great achievements,” The Economist said in one of its recent columns referring to a Pew Global survey which found Indians to be less enthusiastic about democracy and more drawn towards having a strong leader or military rule than citizens of any other democracy surveyed. “It has helped hold a huge and almost impossibly diverse country together. It has kept the army out of power. And it has upheld civic freedoms that, for all their fragility, remain the envy of many of India’s neighbours.”

(The author is a veteran mediaperson. The views expressed are personal. He can be contacted at tarun.basu@spsindia.in)