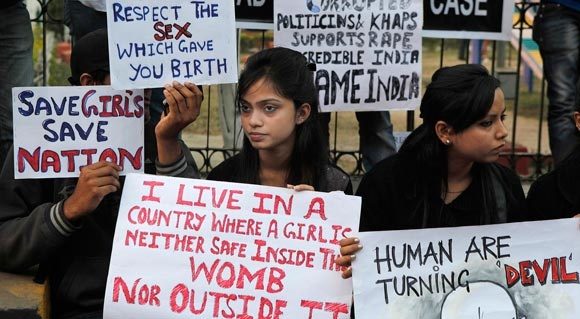 The present situation of women and their rights in India is worrisome despite the huge claims made by the political leaders about their protection and empowerment. And astonishingly the situation is only becoming worse with each passing day in a country which  claims to worship female goddesses.

After the incident of Delhi gang rape in December 2012, the incidents of crimes against women have rapidly increased  in our country, despite court declaring capital punishment to the culprits.

According to a report by NCRB (National Crime Report Bureau), there is one dowry death in the country every 78 hours, one act of sexual harassment every 59 minutes, one rape every 34 minutes and one act of torture every 12 minute and almost one in every 3 married women is experiencing domestic violence.

The majority of crimes against women are reported under the category of ‘cruelty by husband or his relatives’ (32.6%), followed by assault on women with intent to outrage their modesty, kidnapping (25%), abduction (19%) and rape (11.5%)

Some of the incidents in the recent past have been nerve wrecking. On June 2017, a woman in Gurugram  was gang-raped in an auto at night and her 6 month old baby died after the accused threw the baby out of auto on road. In an another incident  in August, a woman was attacked with acid after she resisted the advances and lewd comments of a group of men at Kanpur railway station. She sustained serious burns on her face and was unable to open her eyes, which might have been affected due to acid.

On November 13, 2017, a young woman in Chennai was set on fire allegedly by a man who had been stalking her. While the woman died, her mother & sister sustained grievous burn injuries. Then there was another incident of a 22 year old woman techie from Nagpur on 7 September 2017, who was killed in Maharashtra after being allegedly gang-raped by two of her friends. The accused later packed her body in a suitcase and dumped it.

In an another shameful incident, a 100 year old woman was raped by a drunkard man in UP-Meerut.

The situation is no different in a state like Jammu and Kashmir, which is perceived to relatively crime free. There are 4,714 cases of crime against women registered during last year in which 3,957 persons  were arrested. Overall, trial is  going on against 28,225 persons who are accused in different cases of crimes committed against women.

Crimes are rapidly increasing against women every single day with women being sexually objectified and their loss  trivialized. Recently, a seven year old tribal girl Asifa in Kathua district of Jammu was raped and brutally murdered. Regrettably her story is not uncommon. Yet what has been missing in the recent media coverage is any sense of how to address this horrifying violence that is throwing apart the basic human virtues.

Hadeesa begum (45), from last 10 years is struggling to live with respect and dignity. Her in-laws unleashed atrocities and later her husband abandoned her, remarried & refused to pay any money to support her. But she is not the only one, there are several other women like her in the valley facing same treatment from their in-laws.

Unfortunately, most of the cases in our country end up either in acquittals. In more than 91% cases the accused ultimately walk free.

Even the educated and economically independent women are at the receiving end. Recent an IIT Scholar of Delhi Manjula Devak committed suicide because of a dowry related issue .

So there is an urgent need  to frame strict laws and implement them. Aggressive approach towards safety of women’s should be followed and exemplary punishments to every single culprit with zero tolerance should be given. Though several legislations have been incorporated regarding the women safety like The Protection of Women from Domestic violence act, 2005, but efficient and accountable law enforcement machinery is what actually is required.