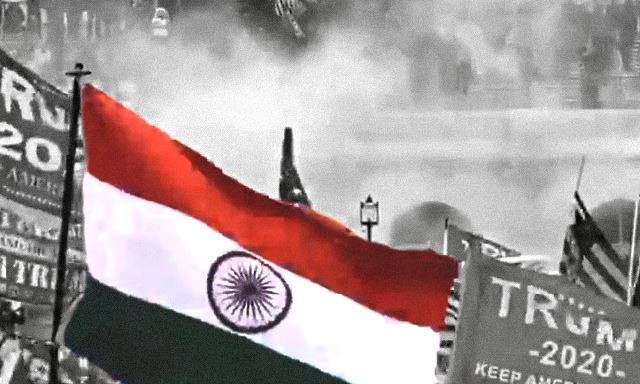 Washington (DC) :   ASPAIRE  (Alliance to Save & Protect America from Infiltration by Religious Extremists)  and  CAPI (Coalition of Americans for Pluralism in India) the   rights groups of Indian Americans have condemned the presence of India tricolor  at Capitol Hill.

The flags carried by rioting mobs sparks shame and horror for Indian Americans, they said in a joint statement.

In what is being called out as one of the darkest days in US history, by none other than the President-elect Joe Biden, when 1000’s of violent rioters owing allegiance to outgoing President Donald Trump, stormed the Capitol Hill building in Washington D.C., on January 6. In what is being widely viewed as an affront to American Democracy, there was yet another moment of shame, this time for India, it said.

Millions of Indians in the US and around the world, watched with shock and horror as amongst the snatches of live telecast of the Capitol Hill horror, were visuals of the flag of India, the ONLY international flag standing out in a sea of American and Trump flags, carried by angry insurrectionists, some of them Indian Americans.

One of the Indian Americans carrying the Indian flag, amongst the rioting Make America Great Again (MAGA) supporters, is Vincent Xavier (Vinson Palathingal) who has long been identified as a MAGA supporter. He lost elections at the local school board in Virginia in November 2019, after he was called out for his fact-free, hateful campaign.

Though traditionally most Indian American have supported the Democrats, the political affiliations of many Indian Americans  went through a marked change after Modi came to power in India in 2014. Since then the right wing Hindutva ideology which fuels Modi and his political machine, the Bharatiya Janata Party (BJP), has also started fanning the hateful and divisive politics of both Modi and Trump on US soil.

The world in general and the USA in particular have been caught unawares with the rise of Hindutva influence not just amongst the Indian American community, but in US politics as well, with some Indian American politicians in the present Congress, supported by Hindutva affiliations. Hindutva as an ideology has nothing to do with Hinduism as the religion, as it is often believed. Hindutva is a fascist cult, fashioned after Hitler’s Nazism, which needs to be identified and investigated as one. Though the first Hindutva presence was established as far back as in 1989 in the US, with the registration of the Hindu Swayamsevak Sangh (HSS), the organisation was largely silent, not infiltrating politically, until 2014. Both Trump and Modi supporters, who view both of the leaders as very strong, enjoy a symbiotic relationship, with a common ideology and goals. But the violent gathering at Capitol Hill is one battle in which Modi supporters indulged which Modi himself denounced in a tweet, especially carrying an Indian flag, hurting the sensibilities of the peaceful Indians in the US and the rest of the world, including India.

Expressing growing concern over the infiltration of “ultranationalists and Hindutva supremacists,” a founder member of the Alliance to Save and Protect America from Infiltration by Religious Extremists (ASPAIRE). Dr Shaik Ubaid, whilst denouncing the attacks on democracy, demanded an investigation into their sustained infiltration into the US power centers.

ASPAIRE is a nationwide alliance of organizations dedicated to preserving and promoting freedom, democracy and rule of law, and has been keeping a tight check on the Hindutva infiltration into American politics. Coalition of Americans for Pluralism in India (CAPI), yet another non-profit, has also condemned the violent attacks on Capitol Hill.

Shaik Ubaid the co chair of ASPAIRE contacted them FBI and provided them with the photo and video evidence and the social media posts of the Hindutva activists who participated in the assault on the Capitol building.  FBI assured Ubaid that to investigate these leads fully.

Mr Masood Rab, chair of CAPI, unequivocally condemned the rioters assembling at the Capitol Building in Washington DC, and breaking in the national historical monument, calling it “an act of terrorism against the American Nation, its properties, and its values”. He added that “President Trump and the legislators supporting his quest to disrupt the American Democratic process shall be brought to justice openly to stand as a lesson for the future American Generations and become part of our history to discourage any future similar activities”.

ASPAIRE/CAPI also condemned President Trump’s denial of accepting the election results not in his favor disrespecting the democratic process that this nation stands for, and instigating the rioters to disrupt the legislature in session for disseminating constitutional process of confirmation of election results and stepping down to the level of criminal autocrats and dictators of the world. Both expressed support for President-elect Joe Biden and Vice-President-elect Kamala Harris, offering them our complete trust and commitment to help reach out in their monumental task of nation re-building.

ASPAIRE / CAPI Team also prays for the recovery of everyone hurt or injured in this travesty of terrorism in our nation’s capital and sends condolences to the families of the those who lost their lives.