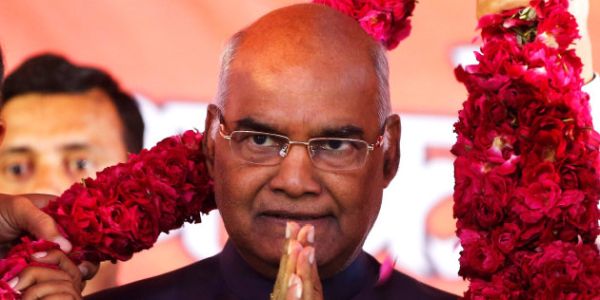 New Delhi: Former lawmaker and president J&K National Panthers Party, Prof. Bhim Singh on Monday once again urged the President of India, Ramnath Kovind to intervene immediately to save Jammu and Kashmir (Jammu, Kashmir & Ladakh) from political disaster.  Taking a U turn on the revocation of Article 370, Prof Singh said the state has been passing through to a dangerous period since August 5, 2019 when it was unconstitutionally, illegally and immorally divided into two Union Territories; Jammu & Kashmir and Ladakh.  He demanded that ‘deceptive’ DDC elections be cancelled till the statehood is restored.

In a letter sent to the President Kovind, he alleged that said the Govt. of India has sacrificed rather mutilated all the constitutional norms and political standards in respect of the state of Jammu and Kashmir which was founded in 1846.

He further alleged that the government of India under the BJP committed several ‘blunders’ in respect of J&K which have been committed after demolishing the State of J&K.

He highlighted several points to debunk BJP’s claim on unilaterally stripping the special status of the  J&K.

I). The State of J&K was allowed with its Monarchy under its Maharaja Hari Singh (father of Dr. Karan Singh).

iii). J&K’s accession has not been ratified by the Parliament of India even when the statehood of J&K was illegally and unconstitutionally announced on August 5, 2019.

iv). It is a tragedy that J&K has been reduced to a Union Territory, which is totally unconstitutional, illegal and a great discrimination with the people of J&K who had supported the Ruler of J&K to sign the Instrument of Accession.

v).  The Assembly in J&K was demolished and the so-called Union Territories of Jammu & Kashmir and Ladakh remained without Assembly as well as representation.

vii).  It was another tragedy rather horrifying discrimination with the people of J&K that so-called District Development Council with 14 members for each district in J&K was loaded on the people. There was no delimitation of the DDC at all nor did the administration of UTs have any power whatsoever to delimit DDC constituencies. All the principles of natural justice were sacrificed, for example, each district was allotted 14 members of DDC without putting any Delimitation Commission least caring for the rule of law, population and other principles which were required to be considered at the time of delimitation of DDC.

ix).  It is the greatness of the political parties in J&K that they are ready to swallow this illegal, unconstitutional, discriminatory treatment besides digesting the decision of the Union Govt. reducing the oldest state of J&K.

In the letter, Prof. Singh demanded that;

a). The statehood of J&K is restored without any delay.

b). That the so-called deceptive DDC elections are cancelled till statehood is restored and the Central Law is made applicable through a due process of law and application of the Constitution of India.

d). The so-called DDC elections in J&K need to be cancelled because these DDC elections are being held in violation of rule of law as well as the Constitution.