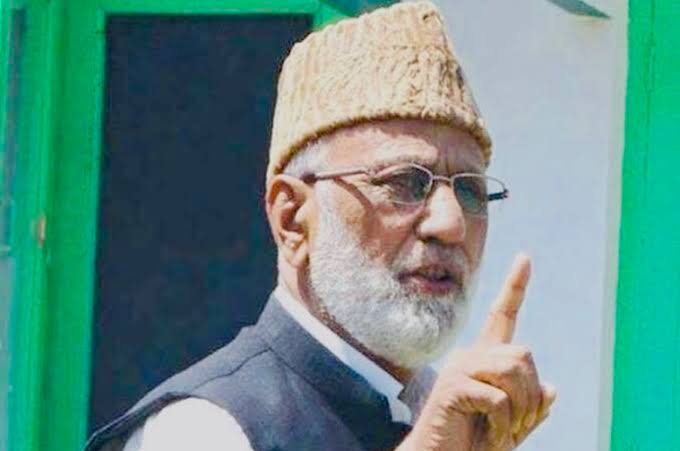 Pro-freedom Kashmiri leader Ashraf Sehrai was buried early Thursday in his native village on the diktats of the police and in the presence of a huge number of security personnel who enforced severe curbs on the movement of people at multiple points in the area, his family members said.

Sehrai, 77, died at a hospital in Jammu province, about 300 kilometers (186 miles) from his residence in Srinagar, the capital of the Indian-administered Jammu and Kashmir, on Wednesday. He was shifted to hospital from a jail in Udhampur, about 60 km (37 miles) from the hospital for respiratory distress, according to jail superintendent Harish Kotwal.

His son Mujahid Sehrai had told Anadolu Agency that neither the family was informed about his health condition till his death, nor was he provided adequate medical care for multiple ailments since July 2020 when he was jailed under a preventive detention law.

Fearing his funeral would trigger massive anti-India protests, the police turned down Sehrai family’s request to bury him at the Eidgah “Martyrs Graveyard” in Srinagar, where hundreds of Kashmiris killed by Indian forces during the past 30 years are interred. Sehrais live in Srinagar.

“They told us we should bury him in Tekipora, his ancestral village between 4:30 a.m. and 5:30 a.m. local time on Thursday [2300-0000GMT Wednesday]. They warned us if we don’t they would take away the body and bury it in Macchil,” Muhammad Younus, Sehrai’s son-in-law, told Anadolu Agency.

Macchil is a remote border area known for the murder of three Kashmiri men by the Indian army in a staged gunfight in 2010, an incident that triggered a massive anti-India uprising later.

Younus said only about 100 extended family members besides friends participated in the funeral that was watched over by a huge number of Indian soldiers and policemen. He said the government forces ensured there was no big gathering.

“Even the people who were offering Fajr [morning] prayers were not allowed to come out of the mosques until the funeral was over. The forces tried giving us COVID-19 PPE [personal protective equipment] kits as if the virus was the cause of his death. But his COVID-19 test was negative. We refused to take their kits.”

He said the deployment of forces was so massive that it could have been bigger than that witnessed during the operation that saw the killing of a popular militant commander, Riyaz Naikoo, in 2020.

“After coming from the funeral, we must have been stopped at least 25 times even though we had passes issued by them,” Younus added.

Slogans like “hum Pakistani hain, Pakistan hamara hai” (We are Pakistanis, Pakistan is ours) and “we want freedom” were shouted during the funeral, said another family member.

In a statement shared on Twitter, Sehrai’s mentor and longtime associate Syed Ali Geelani termed his death “custodial murder for which Indian authorities are directly responsible.”

“The manner in which he was cruelly and brutally denied treatment during his detention leaves no doubt that this is a custodial murder,” the statement read. Geelani had called upon people to offer prayers in absentia for Sehrai.

“India’s oppression of Kashmiris is a blot on int community’s collective conscience. We will continue to support Kashmiris’ just struggle for the right to self-determination in acc with UNSC Resolutions,” he said.

Mirwaiz Umar Farooq, chairman of the All Parties Hurriyat Conference [APHC], a pro-freedom grouping, said in a statement that Sehrai had been suffering from multiple ailments, but his family’s requests for treatment were ignored and the authorities left him unattended till his condition worsened on Tuesday.

“The APHC deeply regrets this inhumane attitude of the authorities and is pained by it,” the statement said.

Ghulam Nabi Fai, secretary-general of the World Kashmir Awareness Forum, said in a statement that Sehrai was “Kashmir’s one of the most courageous and fearless leaders.”

“A man with a mission, he never placed personal considerations above the lofty aspirations of the Kashmiri people,” he added.

Sherai was in jail “not because he was guilty of a crime,” according to Fai, “but because he advocated and propagated the right of self-determination of the people of Jammu & Kashmir, which was, pledged to them under United Nations Security Council resolutions as early as in 1948.”

Columnist, writer and former professor of law Sheikh Showkat Hussain told Anadolu Agency that detaining ailing and elderly prisoners away from their native places in an inhospitable atmosphere, and then subjecting them to humiliation takes a toll on their health.