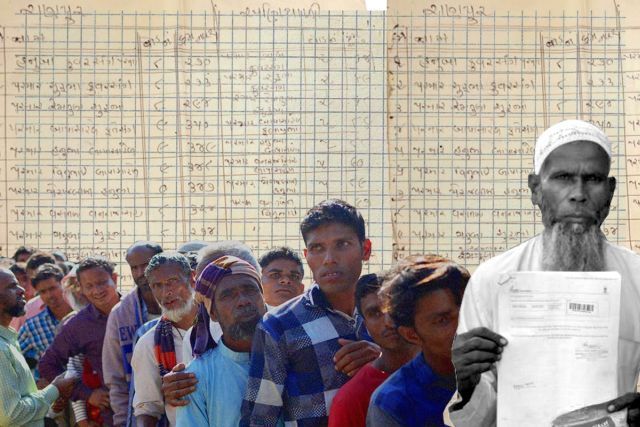 New Delhi: Leading Muslim groups on Monday condemned the attempt by the authorities in Assam to exclude more than 4 million citizens from the final draft of National Register of Citizens (NRC) which was released today. They termed it a “well-designed plot” to de-enfranchise huge population because of their religion and language. They also appealed to people in the state no to get provoke and remain calm and patient.

All India Muslim Majlise e Mushawarat, All Indian Milli Council and both the factions of Jamiat Ulama-i-Hind have seen “communal bias” in the whole exercise from very start of the updating process of the NRC.

AIMMM president Navaid Hamid said the “whole exercise full of faults and fictitious as genuine and valid documents” such as Passport and Aadhar Cards are also ignored as proof of citizenship. Terming it mischievous attempt to exclude around 4 million Indian citizens from Assam’s National Register of Citizens, he said in the initial stage, NRC was seen as the only solution agency to solve so-called ‘illegal migrants problems” in Assam.

“If it is not a tragedy than what that families of freedom fighters; descendants of those great souls who had worked hard to confront the accession of areas of Assam state to then East Pakistan; families of former Deputy Speaker of Assam State Assembly; family of former Director General of Police and families of those government servants who had worked for the state government for more than three decades and are getting pensions after retirement are among other such familiar cases who find their name excluded in the proposed NRC list,” he said.

Unfortunately the only guiding criteria of the NRC officials, it seem, was politics of bigotry and hate to exclude as much as Bengali speaking citizens (overwhelming majority with Muslim names) and a good number of citizens with roots of ancestry in Bihar and the whole exercise is being done not only to create an environment of hate and polarize nation on communal lines, AIMMM chief said.

It is also meant to create a fear psyche amongst the citizens across nation invoking false bogey of infiltration by Bengali speaking population, he said.

He also mocked the fictitious assurance of the Joint Secretary of Union Ministry of Home Affairs that “Nobody would be sent to the Concentration Camps” if names are not in the draft.

Meanwhile, All India Milli Council also condemned the exercise saying it clearly smacks of communal bias, Council leader Dr Manzoor Alam said it was done with a “communal design and for the sake of vote-bank politics.” Echoing the same sentiments, Dr Alam termed it is a deep-rooted conspiracy to de-enfranchise Muslim voters in Assam as this north east state boasts of having the next highest Muslims concentration (around 35 percent) after Jammu and Kashmir. He pointed out that the Institute of objective studies has recently released a paper titled as “2025 Vision Document” which proved that nearly 20 percent Muslim voters’ name were missing from the voter lists.

Jamiat Ulama-i-Hind led by Maulana Mahmood Madani also expressed g concern over the non-inclusion of above 40 lakhs residents in the final draft NRC. It is a very serious issue that will have deep impact over socio-geographic condition of the country, he said.

Urging people to hold their nerve, he said “There is need to deal the problem with legal measures. Whose names have been missing from NRC should seriously take every necessary action and provide all basic relevant documents.”

He has also asked Jamiat Units in Assam to help them prepare document and other related facts. For this purpose, Jamiat has deputed fifteen hundred persons including lawyers and intellectuals to help the needy persons at district level.

If any official harshly deals or misbehaves with any citizen, the same may be informed to local unit of Jamiat, he said.

The other faction of Jamiat led by Maulana Syed Arshad Madani said the people should not to get “panic’ and maintain peace and communal harmony and prevent unrest. He stated that those left in the draft list are given another chance to prove their citizenship claim. Claims and objections from those left out of the citizen’s list will be taken up from August 30 to September 28and for this purpose citizenship verification centers have been established across the state and people submit their citizenship documents at their concerned centers, he added.

Maulana Arshad Madani also referred to Union Home Minister Rajnath Singh’s statement who said ‘This is a draft and not the final list and no one would be deported or arrested based on today’s list and they would be given chance to prove their citizenship.”

He said the statement of the Home Minister made it clear that it is not final list but a draft which may be changed. We look the Home Minister’s statement with respect as we expect that every Muslim and Hindu will get the chance to prove their citizenship claims, he added.

He emphasized that it is a simply humanitarian issue and Jamiat-i-Ulama Hind has been fighting the case in the Supreme Court on the basis of humanity while it has nothing to do with any religion or community and will continue its fight in future too.

The apex court would hold the hearing on other cases-related to the NRC on Tuesday. On behalf of the Jamiat, Advocate on Record Fuzail Ayubi, Kapil Sibal, Salman Khurshid and other lawyers will appear before the Bench of justices Ranjan Gogoi and Rohinton Fali Nariman.