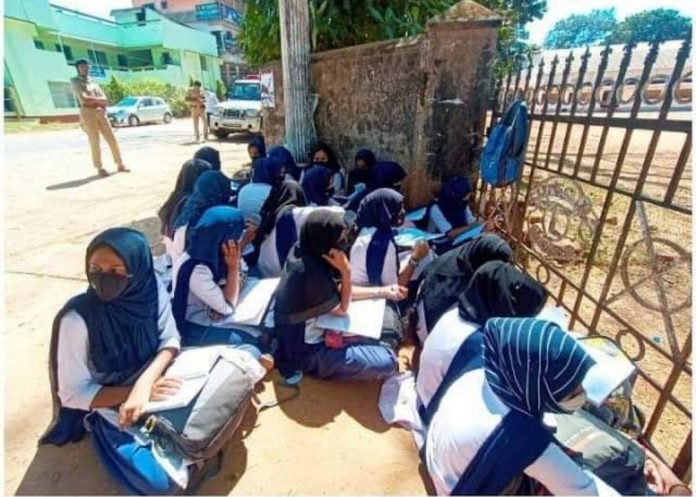 The Modi government talks about women’s empowerment in general, but the BJP government in Karnataka is hell-bent on keeping Muslim girls out of school.

New Delhi: The National Federation of Indian Women (NFIW), a prominent women’s organisation, has criticised the removal of young Muslim girls from Karnataka institutions and schools on the thin grounds that their apparel is inappropriate. It said that the Karnataka government was implementing a plan devised by Brahmanical elements in the state, and that it was a manifestation of a “rabid communal fundamentalist” goal.

Aruna Roy, the organisation’s president and a former IAS, said the Karnataka government gave in to a group of saffron scarved lads’ demand that women wearing hijab be barred from accessing educational institutions.

Ms Roy stated that college after college is closing its doors to unconstitutionally and criminally deny these women their fundamental rights to freedom of expression and education, which are guaranteed to all citizens of this country.

What is being witnessed in Karnataka must be identified as the standard operating procedure of rabid communal fundamentalist groups who proclaim their allegiance to the RSS and the Sangh Parivar, according to her.

“Preventing minority students from attending educational institutions, vandalising institutions, burning down text books and other study materials and equipment immediately before exams are all well-known measures used to further the divisive agenda.” This approach has been used against minority communities in Kandhamal, Orissa, and many other areas.”

Annie Raja, the general secretary of NFIW, underlined that at a time when women’s education is suffering due to various material dispossession and structural violence, the fundamentalist forces are further aggravating the situation to dis-empower women, even more.

It is contradictory and appalling that, the Modi government speaks about all-round empowerment of women, while the Karnataka state BJP government is hell bent on excluding Muslim girls from education, Ms Raja said.

She also pointed  out that the equation between the hijab and a religious symbol (a saffron scarf), is illogical and has been deliberately created for the purpose of raking up communal hatred.

“It is malicious and an attempt to terrorize the minorities. The complicity of the government officials to the unconstitutional demands of the Hindu extremists, make them party to violating constitutional rights”.

It is shameful and unacceptable that the authorities who manage the educational institutions display such communal and misogynist behaviour. Ostensibly, the strictures on the girls are a direct outcome of the threats issued by the saffron brigade. It is deplorable that instead of upholding the constitutional values and fundamental rights, the administration of these institutions have become willing participants in an agenda set by Brahmanical forces, Ms Raja said.

“It is distressing that as women are beginning to assert their right to freedom to choose apparel of their choice, Muslim women are being blackmailed with denial of education and forced to change their choice of clothing. This is a form of cultural diktat of imposing the majoritarian aesthetic. Every citizen has the right to practice and profess their religion of choice without fear of being criminalized”.

NFIW  leaders said the Karnataka  ministers should know that Hijab wearing girls are not “spokespersons for the Taliban”, and they can never be. It is really ironical that the Taliban as well as the Hindu fundamentalist  forces against women’s education.

NFIW would like to reiterate that no religious fundamentalist group, neither the BJP-RSS nor the Taliban, or any other patriarchal body, has the right to regulate a woman’s body or mode of attire. This is tantamount to depriving the women of the country of their right to equality and justice.

By making inflammatory statements, the BJP is waging a war on the freedom of women and fostering an education system that is discriminatory, unequal, misogynist and communal, they said.

NFIW expresses its support and solidarity with the Muslim women students who are fighting for their right to educate and have a right to life with dignity.

They demanded that the Karnataka government should take immediate, necessary steps to ensure the right of all women to dress according to their choice. It is also their constitutional mandate, and in the interest of the nation, to create a conducive atmosphere to enable Muslim women students to continue their education without any discrimination and violence.