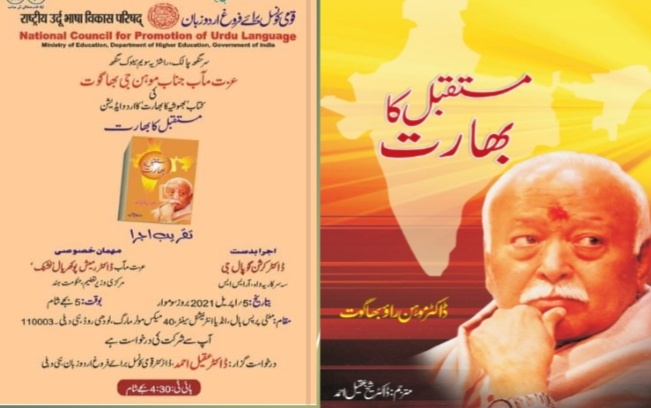 New Delhi: The NCPUL’s decision to release the book – an Urdu translation of Bhavishya Ka Bharat which is a Hindi compilation Bhagwat’s three-day lecture series delivered in 2018 – is violation of Urdu body’s code of ethics. At least half a dozen Urdu linguists, whose works were published by the body, observe on the condition of anonymity called it the violation of the NCPUL’s guidelines which outline that “no book by a political leader or any sectarian material can be translated or published” by the organisation. Notably, NCPUL is an autonomous body under the Ministry of Human Resource Development (HRD).

“This is gross misuse of the funds of NCPUL, whose purpose is to promote Urdu by helping out writers and poets. A book which carries the ideology of an organisation is being promoted in blatant violation of rules and ethics,” said Urdu poet and former vice-chairman of Delhi Urdu Academy, Majid Deobandi, in a section of press. Mr Aqeel, however, refuted the allegation that he had violated the set of rules, saying that the NCPUL has translated Gita and Gurugranth Sahib in the past. He argued that the book “holds coherent discussion on culture, brotherhood, peace and security of the country. He further said that the Bhagwat “called for dialogues between different religious groups, adding that it is an attempt to remove misconception.

“In a bid to appease his political master, NCPUL chief has gone too far… He is not only giving the platform for a noon-Urdu man but also translated his book which might contain ‘sectarian or patronizing’ material,” said a Delhi-based Urdu journalist wishing not to be named, fearing ad cut from the Urdu body that his paper used to get, occasionally. He further made it clear that RSS idea of “inclusive society is nothing but cultural assimilation” of minorities or patronising the non-Hindu identities”.

Interestingly, no Urdu paper has so far carried any story on the gross violation of the NCPUL’s guidelines by none other than its chief himself. Mr Quamar Ashraf, a journalist and media analyst, raised question on Mr Aqeel’s claim, saying that the NCPUL is meant for promotion of language, and nothing else. He said, “I know Urdu papers simply cannot write a word against NCPUL as they fear harsh action from the Urdu body”.

Ever since the BJP came to power, RSS people “infiltrated” institutions, observe Tarique Anwar, a journalist who has contributed a lot of pieces on “ugly manoeuvring” of institution by the majoritarian nationalist group under the present dispensation. He said, “It is the characteristics of an ideological group to take control of institutions by planting their people, but this government has seemingly crossed all limits by recklessly appointing incompetent people. The Congress too did the same, but it never compromised on quality. That it appointed people having soft corner for the party, but ensured that the competent lot get the entry in any institution.” After Muslim Rashtriya Manch, the “RSS is using the Urdu language to instil its divisive agenda” among the Urdu section, he said.

“This is the worst kind of manoeuvring by any political party. By the way, people know very well Mr Aqeel’s qualification for the post,” said Mahboob Alam, a journalist who earlier worked with the Rashtirya Sahara Urdu, a daily newspaper.

The Urdu papers, however, might remain silent, but the social media is abuzz with criticism of NCPUL seeking clarification from Mr Aqeel with regard to the book release and participants on the occasion. Noted rights activist Nadeem Khan in a Facebook post, which drew a lot of responses, forlornly writes, “Ae Urdu tere anjaam pe rona aaya (Oh Urdu! I feel crying over your fate), by tagging the NCPUL’s invitation card. Mr Khan said he was not surprised at all. However, he strongly put, “I am interested to see how many ‘Urdu lovers’ are going to grace the occasion.” He concluded, “This is the litmus test for Urdu lovers.”

The book is going to be released on April 5 at New Delhi’s India International Centre.