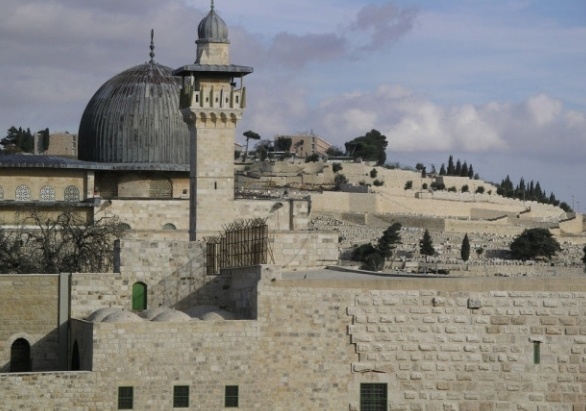 Ibn Ishaq, the earliest biographer of Prophet Muhammad, relates an amazing story about Rabbi Mukhayriq, a wealthy, learned leader of the tribe of Tha’labah, a Jewish tribe allied with one of the three major Jewish tribes that had lived in Medina for centuries; who fought alongside Prophet Muhammad in the battle of Uhud on March 19, 625 CE, and died in that battle. That day was a Saturday.

Rabbi Mukhayriq addressed his tribe’s men and urged them to go with him to fight alongside Muhammad. The tribe’s men replied; today is the day of Sabbath. Halakah (orthodox Jewish Shari’a), states that Jews are not supposed to go to war on the Sabbath unless they are directly under attack. The pagan Arabs from Makka only wanted to persecute the Muslims in Medina as they did for so many years in Makka.

The Torah (Deuteronomy 20:8-10) says: Jewish men who are afraid or disheartened (by thoughts of fighting on the Sabbath) should be told to go home. The Mishnah, the first legal code (Fiqh) of the oral rabbinic Torah states that there are two types of war. A war of defence; obligatory for all Jewish adult men, and all other wars, which are voluntary.

Rabbi Mukhayriq chastised the men of his congregation for not understanding the deeper meaning of what was happening; and announced that if he died in the battle, his entire wealth should go to Muhammad. Mukhayriq did indeed die that day in battle against the Makkans.

When Muhammad, who was seriously injured in that same battle, was informed about the death of Rabbi Mukhayriq, Muhammad said, “He was the best of Jews.”

Rabbi Mukhayriq’s view was unorthodox. He must have seen Muhammad as a Prophet of the One God. He also knew Prophet Muhammad had told his Muslim followers to pray facing north toward the site of Solomon’s Temple, although this was later changed to facing south towards Mecca.

Rabbi Mukhayriq also believed that Prophet Muhammad’s total rejection of polytheism would someday lead to the destruction of the 360 idols housed in the Ka’bah; and other polytheistic practices of Jahiliyyah would receive similar treatment. The Arabs were extremely immersed in superstitious beliefs and activities like Tatayyur (belief in omens), Tanjeem (astrology), Tabarruk (seeking blessing from objects) and Kahanah (soothsaying); that had been condemned by Allah 1,800 years before in the Torah of Musa:

“When you enter the land the Lord your God is giving you, do not learn to imitate the detestable ways of the nations there. Let no one be found among you who sacrifices their son or daughter in the fire, who practices divination or sorcery, interprets omens, engages in witchcraft, or casts spells, or who is a medium or spiritist or who consults the dead. Anyone who does these things is detestable to the Lord; because of these same detestable practices the Lord, your God, will drive out those nations before you. You must be blameless before the Lord, your God. The nations you will dispossess listen to those who practice sorcery or divination. But as for you, the Lord, your God, has not permitted you to do so. The Lord, your God, will raise up for you a prophet like me (Musa) from among you, from your fellow Israelites. You must listen to him.” (Deuteronomy 18:9-15)

Perhaps Rabbi Mukhayriq believed that Prophet Muhammad was not only a non-Jewish Prophet, but was also one of God’s Anointed (a messiah); who with his Arab followers would enable and facilitate the Jewish people’s return to the land of Israel as was predicted in the Bible; just as the non-Jewish Persian King Cyrus the Great; who is called one of God’s Anointed by Prophet Isaiah (45:1 ) had enabled and facilitated the return of Jews to the Land of Israel eleven centuries earlier.

After all, Prophet Joel proclaimed: “It will come about after this that I will pour out My Spirit on all mankind (and not just on Jewish prophets); and your sons and daughters will prophesy, your old men will dream dreams, and your young men will see visions.” (Joel 2:28)

The fact that the Persians had just a few years previously (614 CE) captured the Land of Israel from the Eastern Roman Empire may, in the rabbi’s mind, have stimulated this belief.

Thus, this unorthodox rabbi viewed fighting alongside Muhammad as his personal voluntary fight in support of monotheism; as well as a witness to his faith in the arrival of one of God’s Anointed Messiahs. Although everyone has heard of the final Son of David Messiah, the rabbis also speak of other pre Messianic Age figures including Elijah and a Son of Joseph Messiah, who will precede the Son of David.

This is not only my view. There is a ninth or tenth century apocalyptic Midrash called “The Prayer of Rabbi Shimon ben Yokhai”, an end of the second century CE well known mystic and visionary, who after 40 days and nights of prayer, had a vision of the Kenites (Byzantine Romans); followed by a vision of the kingdom of Ishmael (the Arabs) who will succeed the Byzantine Romans.

The archangel Mettatron then informed Rabbi Shimon ben Yokhai that: “The kingdom of the Kenites (the future Byzantine Romans) will come to Jerusalem, subdue it, and murder more than thirty thousand in it. Because of the oppression with which they (the Byzantine Romans) oppress Israel (the Jewish People) the Blessed Holy One will send the Ishmaelites (Arabs) against them (the Byzantine Romans) to make war with them, so as to deliver the Israelites from their hand.”

The anonymous author of the “Prayer of Rabbi Shimon ben Yokhai” viewed the replacement of the Christian Byzantine Roman Empire, by the Muslim Arabs, as an act of God; which rescued the oppressed Jewish communities throughout the Near East, and especially in Jerusalem, from Christian Byzantine persecution.

In 614 CE a Persian army, supported by thousands of Persian Empire Jewish volunteers, had captured Jerusalem. This event is referred to in the Qur’an: “The Romans (Byzantines) have been defeated in the nearest land (Syria/Israel). But after their defeat, they will overcome (the Persians) within three to nine years. To Allah belongs the command before and after.” (30:2-4)

In 628 CE the Romans (Byzantines) did recapture Jerusalem, and they massacred all those Jews who had returned to Jerusalem during the period of Persian rule. Yet just one decade later, Arab armies had conquered and displaced the Roman (Byzantine) rulers from Egypt to Iraq.

If Rabbi Mukhayriq had not died fighting alongside Prophet Muhammad in the battle of Uhud; he could easily have lived long enough to see the Arab conquest of Jerusalem, and himself been able to return to live there.

In the following centuries, Jews from Spain to Mesopotamia lived much freer lives under Muslim rule than previous centuries of Christian and Zoroastrian rule. Rabbi Mukhayriq was right in thinking Muhammad would begin a new era in world history. Perhaps his devotion to a Messianic future of peace and brotherhood can inspire Islamic and Jewish religious leaders today to heal past wounds, and make Jerusalem a city of peace for the future.

Even four centuries later there were rabbis who saw Muhammad as a Prophet of God. Rabbi Natan’el al-Fayyumi, a prominent 12th-century Yemenite theologian, and the founder of what is sometimes called “Jewish Ismailism”, wrote in his philosophical treatise Bustan al-Uqul (“Garden of Wisdom”) that God sends prophets to establish religions for other nations, which do not have to conform to the precepts of the Jewish Torah.

Rabbi Nethan’el explicitly considered Muhammad a true prophet, who was sent from Heaven with a message for the Arabs, but not for the Jews. As the Qur’an states: “He it is who has sent unto the unlettered people an apostle from among themselves, to convey unto them His messages, and to cause them to grow in purity, and to impart unto them the divine writ as well as wisdom – whereas before that they were indeed, most obviously, lost in error.” (62:2)

Allen S. Maller is an ordained Reform Rabbi who retired in 2006 after 39 years as the Rabbi of Temple Akiba in Culver City, California. His web site is: www.rabbimaller.com. Rabbi Maller blogs in the Times of Israel. His book ‘Judaism and Islam as Synergistic Monotheisms: A Reform Rabbi’s Reflections on the Profound Connectedness of Islam and Judaism’ (31 articles previously published by Islamic web sites) is for sale ($15) on Amazon.