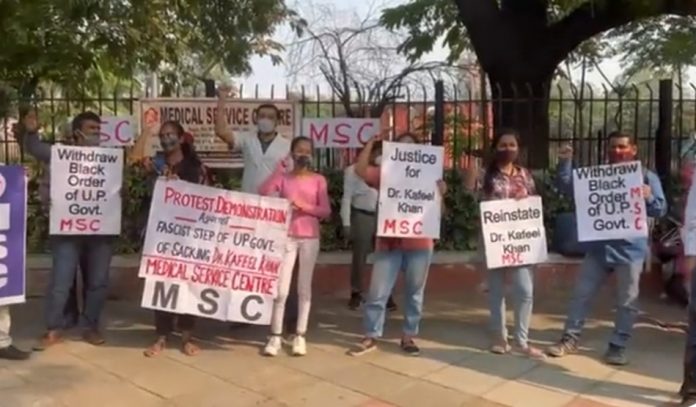 In the protest demonstration students and doctors from different Medical Colleges took part in support of Dr. Kafeel Khan. They held placards to denounce the UP government’s action calling it “fascist step” and “black order”.

He said the Yogi government has no regards to the Supreme Court which has dismissed all the charges against Dr. Khan.

“The Allahabad High Court as well as the Honourable Supreme Court has dismissed all the charges against Dr. Kafeel Khan. But none the less the Yogi Adityanath led UP Govt decided to dismiss him from his post once again without paying any regards towards the ruling of these judicial authorities’.

Dr Anshuman Mitra, Secretary, Medical Service Centre said that MSC is committed towards building up a nation-wide movement against the UP government’s decision. He asked all well-meaning individuals to come forward to participate in the protest.

Dr Khan had been attached to the office of Director General Medical Education (DGME) after his suspension on August 22, 2017, in the wake of the children’s death during the month. The Uttar Pradesh police have filed a number of cases and even arrested Khan on two occasions for his dissenting opinions and speaking out against government policies. He was sacked on November 10 after being found guilty in the probe into the circumstances leading to the death of children in the hospital, UP Principal Secretary (Medical Education) Alok Kumar said.